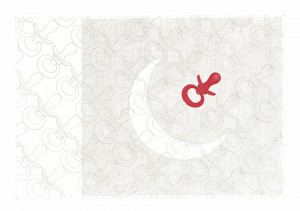 Nine taps with a splotch of blood dripping from one of them. Four lidded containers filled with snippets of hair, red pacifiers, scissors, pine-cone roses displayed on a wall. Round bowls from which baby’s feeding bottles sprout, one of them stained red. They could be concave breasts, the bottle teats could be nipples. A hot water bottle, actually a target board, leaking a drop of blood. Rows of what appear to be ovaries, offset by what appears as a pressure valve about to burst, or a female figure leading a flock. ‘Red’ the exhibition, and red the color is a symbol here for loss, anger and grief.

In her recent work, Abid has used her personal experience of multiple miscarriages, maternity, and a woman’s existence in a closed, conventional society, to make sculptures in wood, with which she began her artistic career, as well as experimenting with other mediums, such as bronze casting and miniature. In the present exhibition, she continues to use the recurring themes of personal loss, a woman’s role in Pakistani society, and maternity, knitting them together with the problems that beset her nation. In Petty Patriotism, a miniature painting, the paper is a flag, superimposed with pacifiers drawn in grey; a single red pacifier substitutes the crescent. In Lingering Prayer, a box with a stand to hold the Quran is carved with a repeat motif of pacifiers, like linked chains; the stand itself broadcasts ‘Intezaar Farmaiyay’ (Please Wait). The installation is faced with a pair of red sandals carved with buds. In Hung by the Freedom of Choice, two pacifiers hang from the wall sketched dimly with a star and crescent. One is looped and hanging from its handle, the other’s teat is strangled by the noose from which it is suspended. In Miscarriage, one in a row of nine taps, like those used for ablutions in mosques, drips blood. While the political analogy in the latter is clear: that religion is used to feed war, that women raise children to become suicide bombers or soldiers in the name of faith, in other works it is ambiguous. Somehow the emotion surrounding the personal experience of motherhood emerges stronger than political ideas such as an exploding population – with its plethora of babies represented by pacifiers – waiting for truth, justice, or education; or blind faith in Lingering Prayer, which appears more as a comment on the way women are trained to focus all their faith and energy on childbearing. Perhaps one reason for this dichotomy is that most of the largest pieces, such as the wall installation titled Conception, or the set of miniatures, are so obviously concerned with fertility. The artist herself is a subject of the exhibition, appearing like a cameo in the center of a miniature painting titled Sacred Halo, surrounded by pacifiers. These works are unsettling to the viewer as much for their use of material, color and composition, as for their intimate, personal nature.

Three finely crafted works which do stand out for the successful unity of the personal, feminine world of maternity, and the political are Mind Flux, which features a split egg set on two tablets. Its cut side is made up of jigsaw pieces, except for a hollow filled with shapes that could be crayons or metal bullets. An apt metaphor for the way in which women feed violence, and for violence itself, which is often hidden. Mother and Child is a pair of egg – or bud – shaped forms in each of which nestles a miniature bud. In one, the ‘child’ is identical to the mother form; in the other, it is armed with prickles, pointing to the way in which women are key protagonists in fostering violence. And Hamstrung, perhaps one of the only humorous pieces in the show, is a pair of shoes tied tightly together with red laces, referencing the way in which we tie ourselves to convention, and to violence.

Abid has fine honed her skills as a sculptor in wood over the last fifteen years. Her earlier work had a tactile quality, evinced even in fairly recent pieces like The Journey and Emerging Brio, both from previous bodies of works, in which the surface is pitted and pecked to give it a raw, uneven appearance. The new sculptures are finely finished. The wood itself is beautiful, but because the sculptures themselves are often repeat motifs, some of them have an almost machine-made appearance. Art practice has, of course, changed considerably; nowadays artists’ works are often partially, sometimes fully, executed by artisans or technicians. Abid maintains that even when she uses collaborative processes, she endeavors to be as much a part of the actual process as possible. To this end, if she incorporates new techniques – such as the recent use of bronze casting to make small metal objects such as hands, bullets or razors (since her themes are often set in the domestic sphere) – she first learns how to master these methods.

Ilona Yusuf is a writer and an artist.