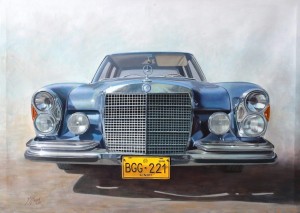 Realistic paintings of S.M Fawad seem to be a sentimental testimony of not only our historic subcontinental past through Colonial Era Architecture but also an outright effort to freeze time on to his canvas through everyday objects, including an assortment of vehicles from a classic Mercedes front, right down to “Sohrab” cycle.

This show titled “Realistic Artistry” opened in early January 2020 at Artciti Gallery that have been displaying the artist’s works since a few years.

Realism traces back to 1840’s when the French novelist, Champfleury verbalised this term, before which the works created were far removed from the reality of life with a romanticised quality to it. Hence Naturalism or Realism was the most logical answer for such idealistic visions with Gustave Corbet’s work being one of the pioneers of Realism.

Realism however may also be more loosely be referred to describe works which are almost photographic looking , regardless of the subject matter being close to real life or not. To swing the pendulum further, Hyper-Realism and Super-Realism fell in to the ambit of illusionistic forms of painting. Shakeel Siddiqui, a highly respected name in Super-Realism, known for his illusionistic mastery is also someone that S.M Fawad draws inspiration from.

A few other artists that he sought inspiration from are Edwin Lord and Andrew Wyeth. His main “Ustaad” however is the well-known Farrukh Shahab who has been working in the Fine Arts for over two decades, under whose mentorship he started his work back in 1999 and to date works and collaborates with him.

Whilst in conversation with the artist, it became obvious that the paintings he creates are mainly a chronicle of passing time that he is transcribing on to his canvas. Something one can see and reminisce over in the future when these buildings and objects would either be not found or if found would likely be in deplorable conditions. “I want to freeze the beautiful Colonial Era Architecture that we have remaining, on to my canvas before they deteriorate further due to the lack of preservation efforts”. It makes him sad to see the condition of these mesmerising buildings, with not much of a preservation plan. Hence his own efforts continue to trace down buildings that are in a relatively better condition so that he can do his part in preserving them on his canvas. It is his awe for these beautiful brick buildings with majestic balconies, double leaf wooden windows and imposing arches which makes them the most frequented subject for his canvas.

Majority of this exhibition comprised of the Colonial Architectural building fronts painted in oils with an almost photographic feel to it, found standing bravely amidst the city’s high pollution levels in the old business center of Saddar, KPT Manora and Urdu Bazaar, to name a few.’

A 37”x 63” painting of one such building exterior in Urdu Bazaar ,with an almost photographic feel rendered to it with its 12 balconies jutting out in a “High Relief” style with earthy stones, and shadows that feel realistic enough for it to be labelled a photograph. Where the rich green base of the balcony is painted with such intricacy, equally captivating are the shadows created by the sunlight filtering through the sophisticated design of wood and metal works. Even the “Ornamental Detail” painted on top of the “Columns” that separate the balconies in a vertical of three, is a commendable effort of the artist to freeze the aesthetic beauty of Colonial/British Raj Architecture –the roots of which lie in Greek, Roman and French Architecture.

In comparison to the “almost photographic” treatment of old buildings, trees and plants where the shadows and detailed brush work on brick and stone walls was captured to look almost photographic, the non-photographic feel also creeps up when observing the peeling paint works on the walls of the KPT Karachi and Manora paintings. In the bicycle at Sea view painting, shadows do not appear to be of convincing nature, nor does the rusted metal look above the bicycle chain seems to have any photographic quality to it. Such contrasting artistic choices are also a part and parcel of an artist’s domain.

It is when painting the bricks and stones (more specifically in paintings titled “Freemason” & “Pan Mandi”) that the artist continues to hone in the almost photographic feel, which is maintained in his infinitely patient brush strokes, bringing out the white coloured “Double Leaf” wooden windows for the Pan Mandi painting, locking in the architectural details of the “Triangular Pediment” atop the windows, a known classic marker for Colonial Era Architecture. Freemason painting too flaunts highly meticulous brush work, with a wooden door under the arch. The brick’s texture as well as the ornamental work right at the top of the arch is neatly captured under the angular shadows of the sun. At this point it is worth mentioning that the Freemason building was declared a protected heritage site under the Sindh Cultural Heritage Act of 1994 and is currently used as a Sindh Wildlife Department building.

S.M Fawad’s realistic style of paintings cannot allow him to add, delete or even give the liberty to stylize the subject that is being painted. That to him is the essence of his “Realistic Paintings”. “Everything I paint exists in real. Every single leaf, every shadow indeed exists in real- nothing can be added or deleted as per my own liking.”