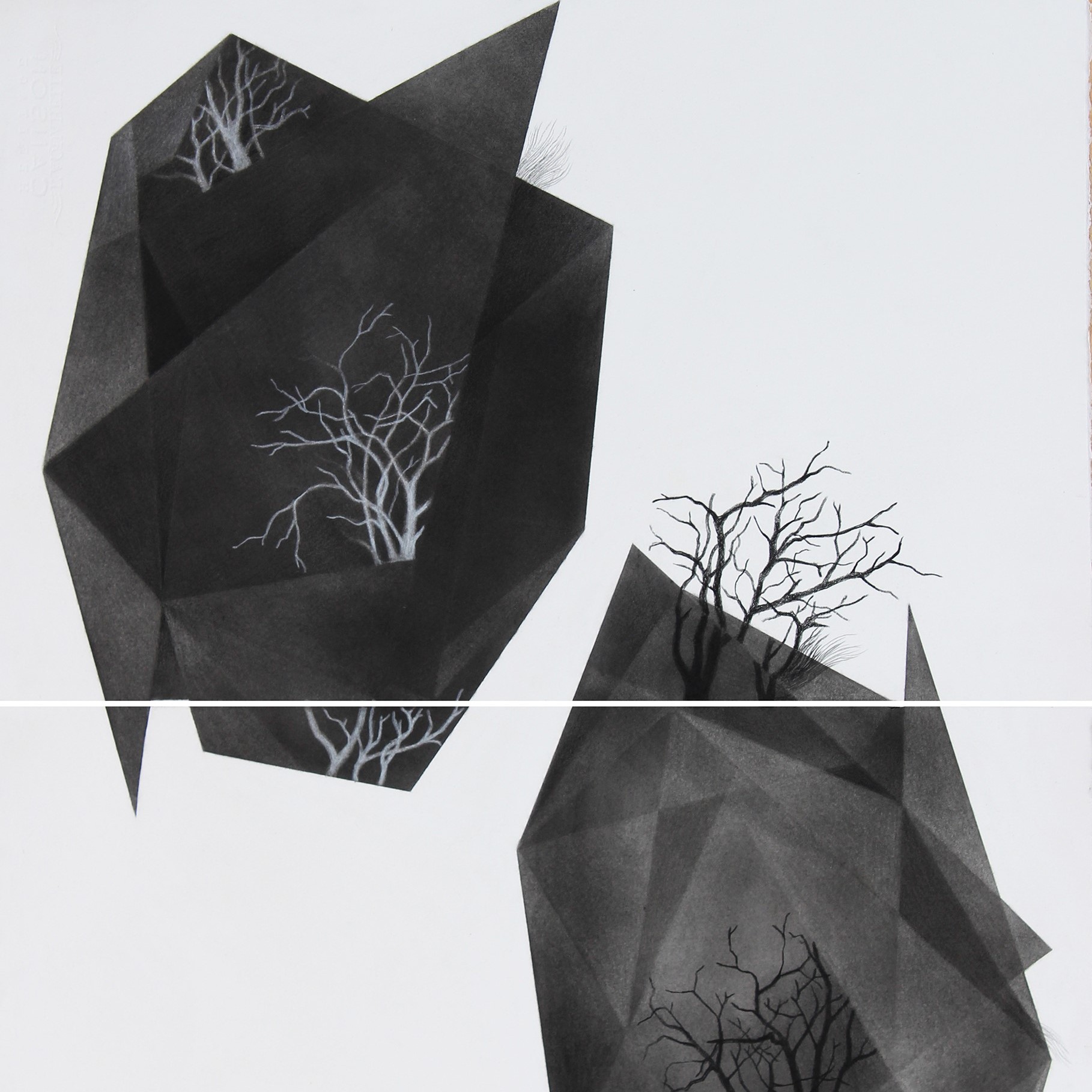 A Stitch in Time
Of Sound and Other Man-Made Objects
A Social Conversation: The Lost Argument by Amir Raza

A show titled “Proximity” was held at Chawkandi Art gallery in Karachi on the 13th of December, 2018 till the 23rd of December, 2018. The works of two artists, which was put on display under artist Roohi Ahmed’s curatorial supervision, comprised of their personal concerns regarding issues such as ethnicity, social injustice and materialism which the artists had addressed through the creation of diverse and abstract visuals; the visuals, comprising of an interesting and elaborate study between the objects and their respective subjects (imagery and topic).

The first artist was Danish Ahmed, a Pakistan based artist, who is currently heading the Foundation Year program at Indus Valley School of Art and Architecture and has exhibited in several shows across Pakistan. Danish Ahmed’s cuboid series consisted of asymmetrical cubes, enclosed in which were organic roots, trees and mushroom clouds (real clouds and the clouds after an explosion) that were commenting upon the new age of materialism that has bewitched man; the spirit of man has drifted away into a bubble instead of focusing on his surroundings and the environment hence, the cubic forms were depicted as confined spaces.

The cubes are constructed with the application of dark shades of gray, possibly symbolizing the atmosphere of gloom that has encircled these boxed spaces as mankind moves further into the abyss of the material world, yet there is a translucency in these cubes, almost as if they are constructed of glass. The depiction of organic forms inside these cubic forms could be representing the inevitable circumstances of being engrossed in a materialistic world; the cubes having sharp and pointy ends seem to be showing no way of escape hence, it explains how living things eventually start to lose their essence once they are under captivity of man-made means and thus, the organic forms inside these cubes are shown losing color and becoming gray.

The second artist whose work was on display was Shazia Qureshi, who is also a Pakistan based artist, printmaker and a faculty member of the Visual Arts department at Karachi University. Her visuals which were created out of ink, consisted of indistinct imagery, mainly comprising of crows and the sea. The crows and the sea could possibly be symbolic of the city of Karachi as they are the main highlights of this particular city and also because the artist’s work focuses on her students who come from diverse backgrounds and struggle to survive in this city.[1]

While using mostly grays and blues, Qureshi has also added a strong red or yellow to enhance certain visuals; the striking color could possibly be reflecting upon the artist’s perception of intolerance and injustice. The use of color against the background of crows and the sea could be symbolizing the lack of peace (peace shown through the depiction of birds and the sea; the use of color could be symbolic of unrest) due to intolerance and hatred, which has now become an important flaw in our country’s system.

Comparing the works of both the artists, it is interesting how both of them had addressed the most prominent issues of the world today; intolerance, hatred, environmental decay and materialism. The artists had portrayed their respective concerns in a way that their visuals seem to be having a tranquil effect despite depicting social and environmental crises, possibly due to the use of a soft, minimal color palette and the treatment of their visuals. Despite having different languages and techniques, Ahmed and Qureshi had put forward their concerns in a manner which not only made one aware of the problems being faced by people in our country and the world today but it also makes one question of his/her helplessness in these situations, as Shazia Qureshi has stated in her own artist statement; Just like the invisible fine string of a flying kite pierces, cuts and injures people unawares, similarly lawlessness, injustice, insecurity and economic misbalance injure and shatter the soul of common man and his ability to soar high.[2]