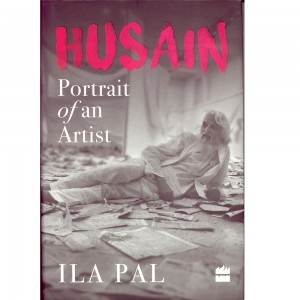 PORTRAIT OF HUSSAIN AS AN ARTIST

Imam Hussain is a figure revered by Muslim across regions, sects and ethnicities. The grandson of the Holy Prophet was martyred for his ideal and sacrificed his whole family in the early history of Islam, Painter M.F. Husain was a person from twentieth century, a painter, yet he was also a martyr of another kind. Victim of the forces of bigotry, oppression and intolerance, Huain had to live last years of his life in his adapted home, Dubai, but his original country, India.

M.F. Husain is merely another name in the long list of sufferers, who are persecuted for crimes committed, accused or imagined. He had to leave his home country India, because a section of society objected upon his images. Thank God, it was merely about desecrating Hindu gods and goddesses, by painting them over with white hue (and other issues) and not about his behaviour towards, ethnicity, nationhood etc. Because if one probes, every act and action of an opposing gender can be considered as offensive, likewise any act of a different religious community can be perceived sacrilegious.

Due to these mind-sets M. F. Husain chose to spend last years of his life, away from his country, his home town, Hyderabad, and his beloved city Mumbai. Mumbai a city that has made Husain and many other artists from the Progressive Artists Movement to connect with the city and its population, which represents whole of India, if not the South Asia.

In a recently published book, Husain; Portrait of An Artist, by Ila Pal one is able to discern the mind of the artist who was larger than life, because he was adorned, revered, criticised and condemned for beyond than what he produced on canvas. Ila Pal is a self-taught painter and worked with M. F. Husain before she had her first solo show in 1962.

So if the history is so ‘long’, the text is also filled with anecdotes from very early period in Husain’s life. For instance the description of the painter being discharged from the Breach Candy Hospital (on 10th Sept 1998) or the recollection of his sitting room in Mumbai. The text portrays him as a person more than a painter, because Ila Pal portrays him as a friend, and not as a celebrity. A role probably Husain abhorred in his life – and after too.

The book published by Harper Collins India 2017 is more about the writer’s personal recollections, notes and diary inscriptions about the great master of Indian art. The book begins with the author’s account of her visit to Husain’s studio: “Then in 1961, on a morning that was equally wet, I mustered the courage to go to Husain’s studio at Bhulabhai Desai institute….. I felt hesitant, but the door was open and the place was crammed with paintings, and I could not stop myself from entering it.”.

The entire book is filled with these personal observations, encounters and intimate descriptions which build a comprehensive image of the artist. An artist who always distanced and defied from the norm, whether directed by the community and norms, or desired by close friends and gallery; still Husain remained one of the most desirable and despicable painters of India. “He is a celebrity – a much sought-after man, preoccupied with his life, more than a man, a myth.”

The book is written –not like a heavy tom of art history, but as pages of diary – about interaction and relation with the artist. A tone that makes you think and revise about the formidable and consolidated art history and the informal and causal information gathered. The writes tackled numerus subjects – as difficult as the painter’s relationship with top lady f Bollywood, Madhuri Dixit, Husain made a movie Gaj Gamini, focusing entirely on this superb actor “All blockbuster starring Madhuri Dixit hit theatre all over the country in August 1994”. That was the time when the idea of a making a movie “that would be a cinematic essay on Indian womanhood through 5,0 00 years of Indian history” inspired him to make that movie.

But more than Husain’s excursion in cinema, film poster (and genre he started painting with!) and oil on canvases, it is the artist’s mind that is questioning, deconstructing, dismantling the ideas about art. He challenged those in his works, gestures, and tried to change world of art around him through his constant involvement in exploring new ideas, technique and imagery. His representation of world around him – whether ordinary folks, familiar personalities (Mother Teresa, Mrs Gandhi), gods and goddesses, or horses – was all a reflection of his personality. Perhaps he believed in what Andre Malraux wrote (and quoted by the author of this book): “If the artist has to find treasure in the cavern of the earth, he must bring his own lamp with him”.