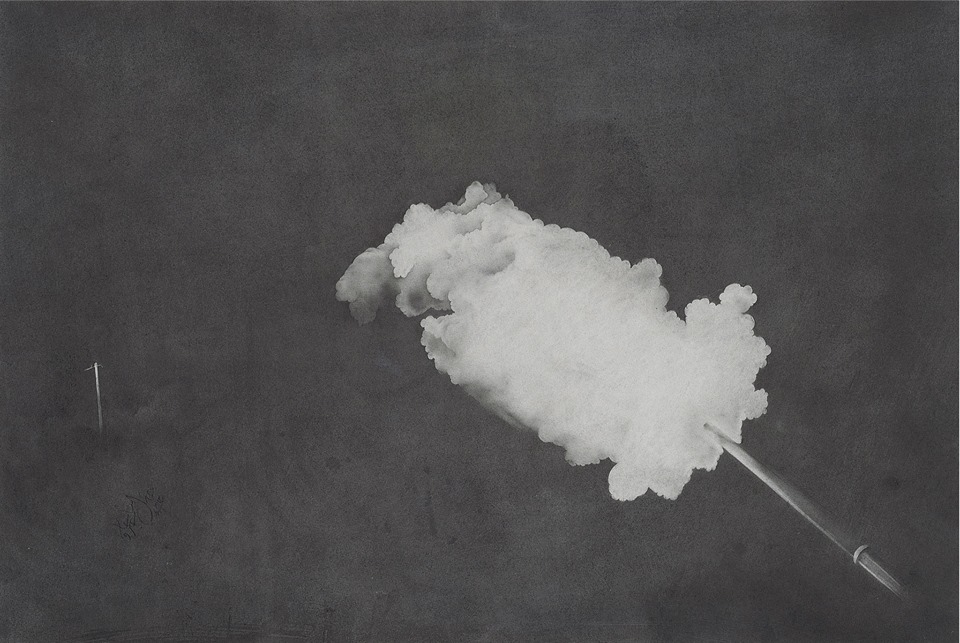 Gray permeates the small, intimate paper with crimson diffusing from its center. It could be a myriad of things, or as the title suggests, an act of celebration (Jashan). It is possible to project multiple meanings on to this single act of memorialization, which ultimately unlocks the desire within consciousness to construe more, to deconstruct, and to engage. It can be an aftereffect of an explosion, of fireworks, or it can also be blood dissipating into water with the reflection of clouds on its surface. The other side of the room is populated with Van Dyke brown on tin surfaces (Transition). These painted surfaces evoke nostalgia coupled with transitioning landscapes. They show a postmodern terrain where metamorphosis is always at work, nothing persists, and nothing is permanent. Speed is implied and contradicted—one is swiftly reversed back to the past. As the main formal device of postmodernism, appropriation seen in these works suggest that in a world structured by mechanical reproduction there could be no uniqueness and the authorship was never exclusively individuated but was engendered, supported, and made possible by shared languages, histories, and memories.

The above mentioned works are present in the official gallery space of the Indus Valley School of Art and Architecture, which looks like an enclosed glass box from the top of its entrance. It is a two person show—curated by Hajra Haider—titled Overcast (February 6th to March 7th, 2014) featuring works by Suleman Khilji and Sajid Khan. These two young artists hail from the famed National College of Arts in Lahore, and their work highlights sheer talent and ardor.

Upon close inspection, one immediately has flashbacks to Anselm Kiefer after looking at Khilji’s work. Some of Khilji’s canvases are relatively large scale, although they are not colossal in their size. Their narratives, however, are sprinkled with a monumental desire to remember, which renders these painted surfaces as relics of a bygone era. The existential crisis seems to have informed his work. Given the current anxiety pertaining to human life in Pakistan, it also informs this reading.

Khilji’s landscapes are hauntingly bizarre, painted primarily in somber hues. They reek of horrors of the past and present. He situates loosely painted human figures within these environments. The result is disarming, which leaves the viewer displaced and/or misplaced. The location of oneself within these painted surfaces remains challenging given the intentional blur. Gerhard Richter’s photo-paintings with a trademark blur comes to mind. The blur adds another layer of meaning, potentially lapsing of time gauging from the brush work. The paint strokes are horizontal in all the paintings in the Transition series, and even in Untitled I, which can mean speed, gradation, a moment of pause in a moving screen, a glitch, and even time-lapse. Khilji is yearning for the past while communicating the anxiety of the present, which he successfully conveys to the audience. However, pushing the scale will further enhance the experiential, immersive, quality that is inherent in his work, and so will a thorough survey of the futurist painter Giacomo Balla.

On the other hand, Khan’s work is intimate and poetic. His visual vocabulary is clearly informed by traditional miniature painting, which his alma mater is well known for. With precise and controlled mark making, Khan’s drawings and paintings become an active site of intrigue. This is, quite honestly, brilliant and ingenious work. He seems to be in the process of affirming life in all of its complexities, no matter how difficult, painful, and joyful it may become for him.  In his work, he appears to be grappling with some of the dichotomies pertinent to life in Pakistan. Khan’s work is primarily composed of gray tones, and gray is neither black nor white and both black and white, a muted, somber color, like the grayness of the day today.

Khan has found significance in the banal—one could potentially argue that is it the best place to do so. In this instance, he finds a lyrical message in the conventional, ever-present, cloud formations, and converts them into dynamic metaphors for death and decay. Clouds when rendered on paper become static, monstrous, and a sight of impending doom. Here, the viewer is forced to converge on to the surface of the paper to identify the scene of devastation and crime as experienced by the artist. Khan adds even more tension to these images by correctly employing the right scale. His works, in return, become a window to look into a world that is familiar, yet unfamiliar. The most remarkable thing about his work is the subtly with which it manages to navigate and perhaps finally inject the dark and magnetic attraction of death during a time of uncertainty and misfortune.

The curatorial strategy employed by Haider is certainly retrospective in its position. It narrates the experience of these two artists from the position of memory and hindsight, with all its open wounds, elisions, anachronisms, and blank spots. Given the overwhelming loss of life experienced as a result of the war against terrorism, pain seems to attend the task. The exhibition suggests that much of the art produced by Khilji and Khan is involved in a shared project of expanding our understanding of identity and subjectivity, and offering increasingly complicated versions of history and memory.♦

Omer Wasim is an interdisciplinary artist with a focus on site-specific, conceptual, installations. He is also an art historian and a critical theorist. He lives and works in Karachi, Pakistan