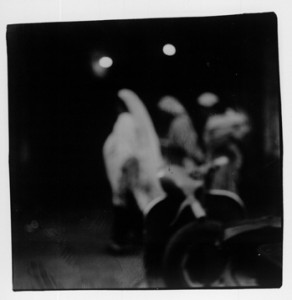 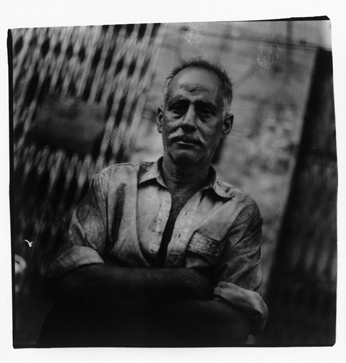 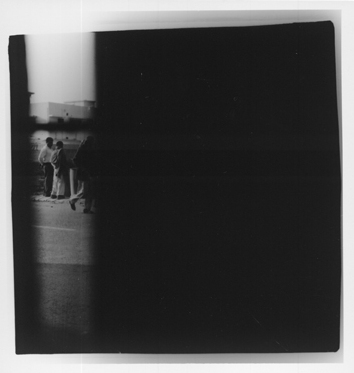 by By Anushka Hosain

Arif Mehmood is known for his street photography, but his works are not in the journalistic vein one most often associates with street photography in Pakistan. “Philosophy: A Photographic Exhibition” is an impressionistic, poetic series of photographs of the inhabitants of Karachi and their environment. The images are haunting, a mixture of nostalgia, resignation, and indifference.
Mehmood works in black in white, but here there is more grey than either extreme. The photographs are mostly dark, dimly lit scenes. There are a number of portraits. In one, a man stands against a wall, hidden in deep shadow. Light through a window throws visibility on his shirt; his face remains mostly obscured, but somehow his eyes capture the light at the precise angle so as which to appear gleaming in the dark. We cannot tell what he is looking at, but it is certainly not the viewer or the photographer. In another, a boy stares defiantly into the camera. It is a frank gaze, not keeping anything back, and a serious one for someone that young. A third portrait, of an older man standing with arms crossed, shares that same open engagement. Here, the camera is tilted at a slight angle and gazes upwards at the man, so he appears to be looking down at us, inverting the typical power relationship between the camera and the subject.
In contrast to the male figures in the photographs whose faces are clearly seen whether they are gazing at the camera or unaware, the few female figures are blurry, distanced figures, sometimes only recognizable as such because of the white dupattas covering their heads. This too is a reality of Pakistan, where street life and the public are the domain of men. In one shot, three women feature in the background, foregrounded by a motorcycle. It is a very blurred image; at least one of the women appears to be carrying something. Two disembodied balls of light float over the heads of two of the woman. The women become figures of redemption, redolent of a metaphysical grace.
Equally interesting is Mehmood’s engagement with the spaces and shapes of urban life. Architectural forms do not remain merely structural; they are what shape the way one not only moves around the city, but also sees it. Through cracks, spaces, and drawn curtains, one glimpses what is meant to be unseen. Framing a shot through a narrow space takes a banal street scene and turns it into something else: an insight into a human moment. Another photograph, a wash of grey, is of a vaguely outlined figure behind what appears to be a barred window; another of a small figure glimpsed in a lighted window at a considerable distance. The camera lingers on these quiet
There are a number of large, blown-up contact sheets with notes and colours scribbled in by hand. They are meant to show the photographer’s deliberation and thought process but
The exhibition was curated by the photographer’s wife, Aesha Arif, who runs Photospace, a photography gallery in Karachi.