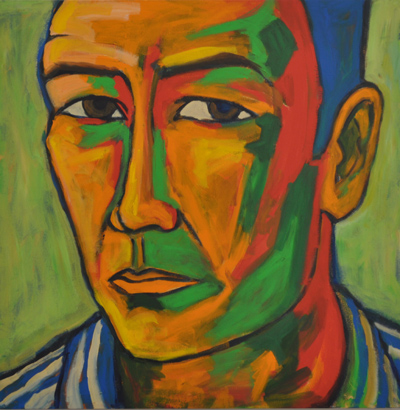 People and other singularities

Moeen Faruqi remains one of the most stubbornly unclassifiable of contemporary artists. However vividly the term Pop encompasses a specific group of works produced by him in the late 1980s and early 1990s, it is not wholly adequate as a label with which to describe his art as a whole, either in terms of his subject matter or his passionate devotion to the traditional virtues of drawing and small scale easel painting. By the same token, though, Faruqi’s own estimation that the main thrust of his work lies in a straight, naturalistic figuration also fails to take into account the strong visionary impulse and elements of heightened fantasy and nostalgia that have consistently coloured the ways in which he conveys his experience of the world. A close, clear-eyed observation has alternated – and often mingled with – childlike invention and an unbridled imagination. He has turned his attention repeatedly to the exotic in the everyday, as in his portraits and interiors with such preposterous names as ‘Faceless Act.’

There is a poignancy and tenderness to Faruqi’s portrayals of even those who present themselves as hard-bitten, tough and worldly: whether this be the female or the male. The women he displays as objects of unrequited desire are separated from mere mortals not just by their attitude, but also by their habitation of a make-believe world that we can never expect to penetrate. The females’ facial expressions and body language make them appear self-possessed and in control, but also vulnerable. That is to say, they come across as complex human beings, with conflicting needs and personae, rather than just as ciphers of desire.

These are all women that we know we can never meet even though some of them may have counterparts in the real world. They are forbidden fruit as much to married men as to pubescent boys, but as objects of desire – like the nude in ‘Found You!’ Are they soiled by this objectification? However, there is much tenderness in these pictures for them to be seen as merely lewd, too much strength in these women for them to be dismissed as passive victims and too much personality for them to be dismissed as empty vessels. What comes across is the fullness of their humanity.

The cinema, the circus, the funfair, previously largely neglected or derided as beneath the dignity of the fine artist, were appreciated as forms of creative expression in their own right, to be honoured for the glimpses they offer into mass culture by Moeen Faruqi. The very notion of presenting his own art in the guise of entertainment is a radical and iconoclastic one in its affront to the earnest seriousness and high moral tone characteristic not only of academic traditions but also of much avant-garde art of the twentieth century. Allying himself with journeymen decorators, sign painters, commercial artists and self-taught naïve painters, Faruqi bravely and democratically declares himself as an artist of the people rather than as one who wishes to address only his fellow painters or a cultural elite. He does so not only through his choice of subjects, but also by apparently submerging his own artistic identity into that of existing styles from outside fine art traditions, presenting his paintings as if they were objects he had found ready-made in a timeworn condition. Their manifest skillfulness and finely rendered detail are in direct counterbalance to the overt simplicity and apparent effortlessness of the found-object aesthetic of his most extreme works.

That many of the characters in Faruqi’s oeuvre also hide behind masks hints that beneath the bluster they may suffer from shyness. The characters emerge as self-portraits. Is this just coincidence? It suggests at least the possibility of a direct link between his representation of himself – and his adoption of multiple guises in a constantly shifting artistic identity – and his creation of an endless cast of compelling characters that function on at least a subliminal level as the exciting alter-egos for a man who knows himself to be quiet, retiring and self-effacing. Just as the characters are understood to derive some of their power from the creation of a fictional identity that supersedes that of their hidden selves, so Faruqi gains strength as an artist through a constant return to what might be mistaken for an eccentric or wayward strand of his subject matter. As one of his obsessive themes, the pictures must be understood as being as central to his artistic identity as his Pop Art or his evolution of naturalistic figuration.

Eye contact is a simple, individual, yet also complex, event in human interaction that only rarely makes a lasting impression or opens a perspective. Pictures are a way of preserving the human gaze, and in our perception of human contact photographic portraits have become a phenomenon of mass culture, a contemporary form of folk art that likes to flirt with pretty appearances.  Professional artists delude our vanity and manipulate us using idealised poses of varying degrees of quality. Historically, the portrait is an artistic genre in its own right.

Moeen Faruqi’s portraits illustrate this phenomenon, taking the individualisation of this traditional genre to its limits. Faruqi’s unorthodox approach and technique break with the conventions of the portrait, but in such a way that they still shine through in his paintings as a relic of sanctioned experience. There is an air of expectation, curiosity, but also skepticism in the expressions of the people he portrays. Faruqi shows people as strange. Silence, seriousness, melancholy express themselves in questioning stances. What was communicated while the picture was being painted? Does the painting reveal whether a sitting actually took place, or whether the work was done from photos, sketches, or memory? What do the portraits themselves say? What do they tell us about the nuances of a direct or indirect dialogue between the painter and the model? The people depicted are absolutely present in the paintings – but they are accessible to varying degrees. What brings them to life is the extreme complexity and diversity of their aura. However, it would be untrue to say that Faruqi’s stance is that of the curious artist keen to probe people’s secrets. His portraits reveal a detached approach that leaves the subject in his or her questioning attitude. From the point of view of the picture, the portrayed person is transformed into painting. This manifests itself as motion, rhythm, as a dynamic process of application of paint and composition of structure, whereby figure and space come alive in the picture through colours and the energy of the brushstrokes. Here we find an inimitable artistic freedom that stems from Faruqi’s willingness to take unorthodox risks. His portraits maintain equilibrium between content and abstraction.

Moeen Faruqi’s art responds to what he feels to be a decadent world. The vitality and excitement of city life are reflected in complex compositions in intense colours, whose titles already suggest a focus on formal aspects, such as ‘The Red and the Black.’ The arrangement of the figures in these scenes, which Faruqi turns into paintings from sketches or memory, express in visual terms the volatile, tense atmosphere of the milieu. Slanting, unbalanced compositions capture feelings of irritation, claustrophobia, insecurity, and shadiness. Bright, gaudy colours generate a dissonant tension. The rhythm of the paintings is angular and awkward. Faces have no eye contact with the viewer. Faruqi shows them in an ambivalent state of presence and absence. The group of works shown at Khaas Gallery in Islamabad recently shows how consciously Faruqi searches for extremes, for strangeness, for the other, and how precisely these artistic quests bring out his creative potential so impressively.

In paintings that reflect his preoccupation with human inscrutability in bizarre, daring compositions, the generally typified faces emerge from Faruqi’s imagination. They are products of fantasy that are only dimly reminiscent of people he knows. The faces are overdrawn; their distorted expressions appear theatrically staged. Despite his inner distance from the subject, Faruqi achieves in his portraits an impressive symbiosis of expression and plainness. The simplicity of the human expression is achieved by the restrained motifs; the painting displays amateurish, naïve traits, for example in the stiffly ordered poses of the subjects. Then – full of virtuosity – unorthodox, abstracted, wild pictorial structures burst in with quite informal brushstrokes. Spontaneous whirls of paint, whose colouration expressively alienates the physiognomy, render in a conceptually controlled manner, a confrontation with physiognomy, facial expression, inner life; a dynamised field of tension vibrates on the surface of the canvas, and a controversial symbiosis of material factors and transcendental vibrations is revealed.