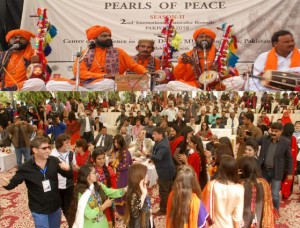 From small cities to big countries there is always something – food, music, tourist spots, culture,  its people – that makes the place special for visitors. For the locals it becomes their pride and honor. When we hear of the name Jamshoro[i], what springs to mind immediately are images of the Ranikot Fort[ii].

But there is more to Jamshoro than what meets the eye and comes to mind. Jamshoro has been a center of cultural and traditional events besides its historical significance. On the other hand it cannot be denied that the educational institutes in Jamshoro have carried the city to greater heights of accomplishments today where events like the International Biennales are hosted by the academe.

This year Jamshoro had the honor to host the Second International Watercolor Biennale “Pearls of Peace, Season II” with the collaboration of the International Watercolor Society (IWS) at the Center of Excellence in Arts and Design (CEAD) of MUET. The event took place on February 14, 2018. It was a symphony of watercolors which brought national and international artists from more than 60 countries under one umbrella.

Ali Abbas Syed[iii] curated the second season of the Watercolor Biennale at Mehran University of Engineering and Technology (MUET), Jamshoro. Syed is a renowned watercolorist himself. He was also the recipient of the prestigious Gold Medal Award at the Biennale held in Spain in 2014. His work is recognized on national and international levels. He paints the people of Thar within the environment they are most familiar with. The artist is influenced by Sufism which is strongly reflected in his works.

From music to paintings, MUET was embellished with the essence of art that didn’t let the foreigners and locals feel a difference of color, race, language and especially culture.

After an hour of joy and fun the inauguration ceremony took place at the A.R Nagori Gallery which is situated within the campus.

The gallery sparkled with the ‘pearls’ displayed all across the gallery. The Counsel General was taken through the galleries to witness a treasure of watercolors which adorned the halls.

As soon as the gallery opened, the foreign and local artists were surrounded by all the art enthusiasts, dignitaries, writers and students who came to Jamshoro to meet these artists, experience this grand event and get some words of wisdom for their future endeavors.

The walls of the A.R. Nagori Gallery were solely reserved for foreign artists’ work. From landscapes to portraits, flowers to birds, animals to fruits, the walls of the gallery space were enthralling with watercolor paintings from around the world.

The other rooms were adorned with the watercolor paintings of the national established and emerging artists. The local artists showed a refined variety of watercolors depicting the village and city life from where they belonged. They enhanced the culture and simplicity of the country whereas the budding watercolorists focused on the portraits of the local people and highlighted the city life in their work.

The gallery, thronged with countless art enthusiasts,  had an honor to display 444 watercolor paintings of the foreign and local artists whereas more than 20 foreign and 50 local artists were present at the event who spoke to the students, visitors and media about their experience being in Pakistan and exhibiting their art.

Atanur Dogan, the founder and President of the IWS, said: “The branch of IWS in Pakistan is the strongest branch and this Biennale is a proof that the purpose of arranging this Biennale is to introduce the art of one country to another and spread love among them.”

“The participants have enjoyed this face of Pakistan which they never imagined due to all the negativity spread across by the media. They now know that Pakistan is a peaceful and peace loving state and the image is completely contrary to what they have heard before visiting Pakistan.”He further added.

The hospitality of the hosts was at its peak ensuring that the artists and visitors alike were well taken care of . Hi-tea and dinner was arranged with a variety of local and international dishes.

After the hi-tea, all the artists, guests and students congregated at the Auditorium for the award ceremony. The Auditorium was reached through vans and private cars and was fully packed with a fervent audience. The award ceremony began with the national anthem sung by the students of MUET after which the play “Silence” was performed by the students of CEAD. It was based on the reality of today. The play was also a strong comment on the role of media today. The play ended with a very powerful message about inquiry and quest for truth and the role of justice to save the nation from disastrous implications. Everyone appreciated the efforts of the students and the students of CEAD proved that great talent with strong concepts is emerging from Jamshoro.

“Art is the way to spread love and peace. ‘Pearls of Peace Season II’ have again proved to be an event that could help us change the image of the land. Artists have a different and beautiful way of portraying issues of today’s world.”

“I thank all the foreign and the local artists who have come here to make the event a history and spread the message of love, peace and harmony within the region and across the globe. I hope that this event will bring fruitful results to the country and play a pivotal role in changing the image of the country around the world.”
The Italian Counsel General, Anna Ruffino started her speech by greeting the audience in Urdu which won the hearts of the audience. She said that it is her pleasure to be here. She thinks that this Biennale is an exciting event and will convey the message of love all over the world.

After speeches and performances, the award ceremony started to appreciate the services of the eminent Pakistani artists who are residing in Pakistan and abroad and commended the role of the foreign artists. Appreciation, excellence and lifetime achievement trophies were awarded to the nominated artists.

The Star award was given to Atanur Dogan, the President of IWS. After receiving the award, Dogan delivered a speech in which he said:

“Born and brought up in Turkey, I founded the IWS in 2011in Teos, Turkey and a branch was opened in 2015 with an eminent artist Ali Abbas Syed. I want to tell all the people present today that art gives a message of peace and love only. People should see this face of Pakistan and not the negativity portrayed about the country. I thoroughly enjoyed the second season “Pearls of Peace” and wish all the artists the best in life.”

“We all have become a family and new members keep adding every year and this is how we are expanding not only as an organization but as a family and successfully spreading the message of love, peace and harmony all over the world.” he further added.

The Excellence Award was given to Marjorie Hussain, an eminent art writer and an art critic, serving the art of Pakistan for a long time.

The Life Time Achievement Award was given to Syed Moazzam Ali, a renowned watercolorist of Pakistan who is well recognized and appreciated all over the world. He has taken watercolors to new heights of success each time he exhibited his work. Moazzam Ali is a well-known and eminent name in the field of figurative painting and majestic watercolor techniques not only at the national level but is also acclaimed internationally.

Moazzam Ali has been crowned the “Master of Watercolors” by the Whitney Museum of New York in 2007 due to his innovative techniques in watercolor and won an international award.  In 2008, a book titled “Moazzam Ali” was published in his honor. Later in 2016 he was awarded the “Pride of Performance” by the Government of Pakistan.

“He deserves more than this, maybe different awards every year. He is a magician; he paints with a technique that few have mastered. He is a treasure for the country, no doubt.” – Artist Jamal.

The other established artists who won awards due to the excellence and command in watercolors were Hajra Mansoor, Ameer Hassan Rizvi, Sarfaraz Mussawir, Abdul Haye, Fateh Halepoto amongst others.

The award ceremony ended with folk and cultural music by a famous band of Jamshoro and then a grand group photograph was taken of all the artists, local and foreign, with their awards, along with organizers, teachers and students; capturing the memorable moment in history.

Dogan ended the ceremony by singing the national song of Pakistan “Jeeway Jeeway” on stage and made everyone sing along with him.

The artists also set a record by painting a 22-meter long sheet on the lawns of CEAD. This huge painting was made by 15 foreign artists, including Liu Yi from China, Ze Ze from Hong Kong, Endre Penovac from Serbia and other, and 10 local artists. This painting focused on the different aspects of the local life of village and Tharparkar.

The second season of “Pearls of Peace” proved to be a peaceful event that has made history by bringing a large number of artists from all over the world on a same platform ensuring that the legacy of watercolor is well appreciated and recognized everywhere in the world. In fact, watercolor is the oldest medium known since the early cave dwellers who would use natural colors found from earth to add life to the drawings they made on the walls of the cave.

Watercolor is not an easy medium to master and Pakistan is bestowed with watercolorists like Zain ul Abideen, Syed Moazzam Ali, Ali Abbas Syed, Abdul Hayee, Zahin Ahmed, M.A. Ahad and many such who have taken watercolors to a high level of maturity.

A technique best known for its vulnerability of medium, best used to portray emotive and analytical narratives from primeval times to present, I would like to honor the event by concluding the essay with this pertinent quote:

‘You will see – in the future, I will live by my watercolors’[iv].

[i] a city in Sindh and the capital of Jamshoro District,

[ii] Also known as the Great Wall of Sindh it is the historical fort near Sann, Jamshoro