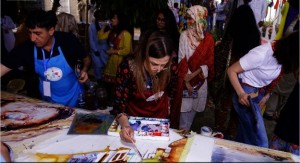 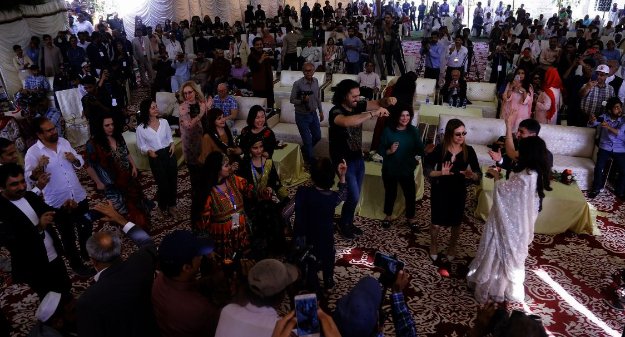 Jamshoro holds the history of being the host of the first ever biennale held in Pakistan. In 2016, the under-rated city was chosen to host the International Watercolour Biennale. It was not less than a surprise that Jamshoro brightened the event with its magnificent sights and heart-warming hospitality.

Since then Jamshoro became the venue where local as well as foreign artists would wait to gather every after two years to commemorate the legacy of watercolour medium and spread the colours of peace, love and harmony.

On the Feb 26th, Center of Excellence in Arts and Design (CEAD) of Mehran University of Engineering and Technology MUET greeted the third iteration of International Watercolor Biennale Pakistan titled ‘Pearls of Peace III’.

The energetic cultural dance and warm welcome of the guests would make forget the weather. The third season was not less than a celebration that had brought hundreds of artists from around the world. From mesmerizing watercolour paintings, the event was filled with lively performances.

Espying the MUET building, one would wonder how fast the university has grown into a cultural hub where not people but countries exchange cultures and traditions. Entering MUET this time felt like entering in a world of colours where all colours fuse together to form a new one. The event has always been successful as it brings the masters to the spotlight and let the audience, art lovers and students treasure the medium and learn masterly techniques from their favourite watercolour masters.

Taj Mastani, a very well known singer from Sindh, won the hearts of the audience with her vigorous singing. Her energy, volume and pitch would not require music as she herself was a bundle of talent. Why would not anyone dance over her tune? The audience could not maintain the formal guest appearances as her powerful singing brought everyone on the floor. Artists from all countries danced on ‘Ho Jamalo’ like they understood each and every word of the song.

The one who would indulge others in increasing the energy of the festival was none other than the curator of the show; Fatima Ali. To make Pearls of Peace’s every edition a success, the hard work and devotion of Fatima Ali, and Ali Abbas Syed, a renowned watercolorist and country leader of IWS, could not be ignored. The event held in the times when a global health emergency was announced yet the number of attendees of the event proved the unity and sincerity toward the mission of promoting art and culture.

The first query that a Pakistani would have in mind is about the international artists enjoyed the event or not? But one would ask any foreigners ‘How does it feel being in Pakistan and have they liked the country?’

It is a proud moment when the guests speak high of  Pakistan; they gladly replied to the query and said that the image of Pakistan is opposite to what it’s like in Pakistan; peaceful. Alena Kruglova (Russia), Asuman Dogan (Canada) Bea Strugo (Argentina), Natalia Studenkova (Ukraine), Diana Toma (USA), Bob Hannah (USA), Pedja Acimovic (Italy) and Vladimir Marcos (Argentina) enjoyed their stay in Pakistan while they loved the hospitality and people of the country and optimistically commented over the security.

The Chief Guest of the occasion was Syed Sardar Ali Shah, Provincial Minister of Sindh for Culture, Tourism, and Antiquities.  He respected the festival and came with no sirens or horns or black uniformed police. He sat among everyone like a general audience. He assured that the next biennale would be another surprise for the people of Pakistan. He expressed his intentions to promote art and culture in Pakistan.

One would feel so proud to listen to a foreigner singing their country’s patriotic songs. It was not a surprise this time as well having Atanur Dogan, the Founder & President of IWS, singing ‘Jeevay Pakistan’ with so much patriotism. He expressed his gratitude to the attendees as the world knew how crucial the situation was about to get due to the rising pandemic. The Canadian-Turkish artist, Dogan has always loved the environment and the biennale arrangements. The other reason of enjoying the biennale in Pakistan is that it offers what no other country does; hospitality, festiveness and chance to own the biennale.

The environment is one of its kinds; master watercolourists surrounded by young enthusiast art students, visitors astonishingly gazing at the intricacy of watercolour medium captured in landscapes, cityscapes, portraits, still life and culture. Watching the compositions contrast and colour palatte in each of the artwork was itself a complete insight artists’ dexterous techniques. Painters shared their cultural tales with wider audience.

In every biennale CEAD students offer a captivating performance. This time they brought speculating mime performance that revolved around the global issue; ecology. The performance was very well composed and synchoronized.

They brilliantly depicted the evolution of human kind and how materialism doomed it. The performance comprised over a few parts in which the evolution phases, destruction phase and the future was predicted in which human will not have clean water to drink, organic food to eat and air filled with toxic waste will destined human to death. The storyline was not only strong but was very well put together the hall applauded until the purple lights turned warm.

The biennale felt like a family gathering where relatives from different countries gather and cherish memories and moments. Dogan joyously shared his motive of founding the International Watercolour Biennale. He believes that the biennales are not only art events but builds strong bonds among countries, people get to know diverse cultures and it brings an opportunity to replace the negativity with love, peace and harmony.

“With the Country leader of Pakistan, Ali Abbas Syed, the biennale in Pakistan became a success. I founded it and today I am pleased to see the growth of IWS in more than 85 countries.” He said.

“People should see this face of Pakistan and not the negativity that portrayed about the country.” He added.

There were a few new categories in the awards such as ‘Best Organizer Award’, ‘City Coordinator Award’ and ‘Media Coordinator Award’ in a response to city and media coordinators and organizers. Eminent watercolorists, watercolor masters, Appreciation Awards and Excellence Awards were distributed among the artists. After a few minutes of struggle to get adjusted according to heights, everyone managed to say ‘cheese’ for a group photo.

One would go empty hands but come back hands full of gifts, catalogue, ajrak and what not that is given at the end of the ceremonies. This grand biennale did not come to an end on the first day. But the second day was a trip to the city of lights, Karachi. The live painting sessions held at the Port Grand was a treat to the eyes. The setting sun beamed its light over the canvases and the colours reflected back to the eyes confused the mind to discern the actual colours. To roam around the city with so many foreigners was not a piece of cake however Murtaza Wahab, Adviser to Chief Minister of Sindh on Law, Anti-Corruption Establishment, and information, made it so.

As the opening of the biennale was grand so the closing ceremony was not less than that. It was held at the lawns of CEAD where artists painted a 22-meter long sheet. The images might show artists and participants wearing yellow or colourful scarfs because the students were celebrating Basant in the university which was an addition in the biennale. The round of performances didn’t end on the third day as well but this time the students sang and danced to mark the joyous biennale.

The third iteration of the Jamshoro Biennale set a benchmark. The curators, organisers and the city well-hosted the biennale and legacy of watercolor is well cherished. The preparation of the fourth biennale had started right after the week of the third biennale ended. Being the first city that hosted the first ever biennale started in Pakistan, Jamshoro has become the city of festivals. One could not wait to be a part of the fourth biennale.