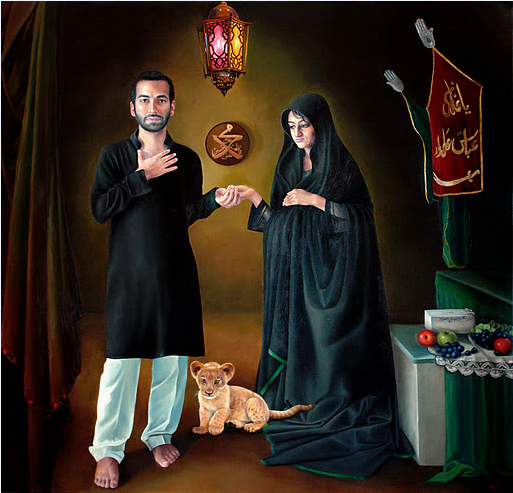 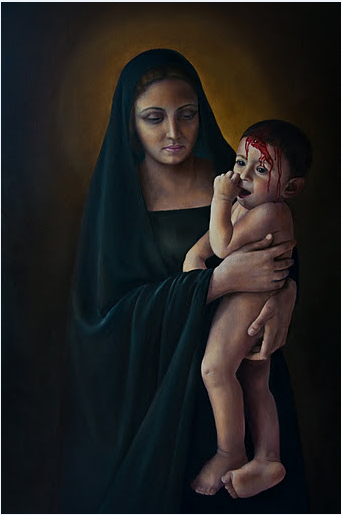 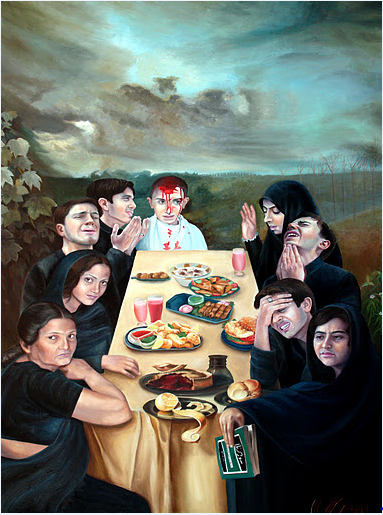 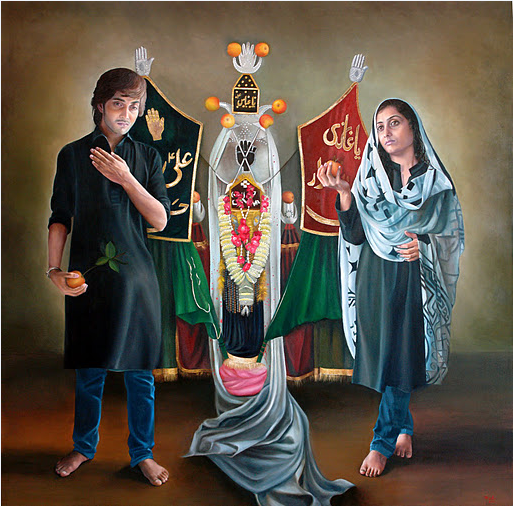 Two young artists Komail Aijazuddin and Mohammad Ali presented their works at Canvas Gallery, Karachi in December. The two sets of work were titled separately – Altars for Aijazuddin’s and Condolence Theatre for Ali’s but serendipitously, they both coalesced in their trajectories of thought and thematic inferences. Both were based on the presumption of religious art – an oxymoron in our religious tradition but not without example in the cultural realm of devotional ritual. But perhaps a leap of faith (no pun intended) has propelled these two artists to initiate a new concept in art in Pakistan, one that must be recognized for its innovation and may in fact find a place in the annals of our art history.

Komail Aijazuddin has used the altarpiece of Christian art as his pictorial space. He reverts to the use of the wooden triptych of fourteenth century Europe used as permanent or portable votives to decorate the spaces above and behind the altar in churches. The most famous of these is The Adoration of the Lamb, also known as the Ghent Altarpiece, a polyptych in 12 panels by Hubert and Jan van Eyck, painted in 1432. Altarpieces depicted biblical themes and included representation of saints and holy personages. Aijazuddin substitutes the biblical drama with narratives from our own tales of passion—more specifically the incident at Karbala involving Imam Hussain and his family that denoted the supreme face-off between good and evil, right and wrong, and brought into play the most vital theological instruction of Islam which is submission to the will of Allah. He titles his paintings after masters’ works as in The Entombment by both Michelangelo and Caravaggio or The Denunciation by English artist George Watts. Aijazuddin does not depict the actual incident of Karbala but the traditions that have emanated from the incident like the gathering or Majlis, the self-flagellation, or the walk on a fire bed in Moharram. But Aijazuddin has gone a step further and transformed the images into an analogue for the present, incorporating the immediacy of social and political crises that envelope us. The rapid fluidity of the paint flashing across the surface of the wood, instead of the traditional dense layering of formalism also pegs the work to present-day realities  and makes the borrowing only that much more significant to fleeting currency.

In the strain of narrative painting characterized first by Caravaggio and then Rembrandt, we are confronted by a single image and the spectator is invited to elaborate the narrative by speculating on events preceding the episode. Thus the moment of drama is significantly enhanced. Aijazuddin portrays scenes replicating the remembrance of the martyrdom of Imam Hussain but goes on to illustrate scenes from a wedding, although a darkness pervades these as well, and the theatricality of the people in the scene is highlighted by a farcical exaggeration of the players.

Mohammad Ali is an artist who graduated a year ago, but seems to have developed speedily from his embryonic stage as a talented painter to a thoughtful artist. His present works are huge canvases that are proxies for famous paintings selected eclectically like The Betrothal of Arnolfini by Van Eyck and The American Gothic by Grant Wood and even nuances from The Last Supper by da Vinci.

Within the environment of the paintings, Ali substitutes the old with the new and the spiritual with the corporeal and the temporal, suggesting the enduring legacy of the Karbala martyrdom and its relationship to our lives. He says about his work Vanguard of Faith:

“The painting is after Adam and Eve. The apples held by the protagonists are not symbolic of lust; they are not even the forbidden fruit. Even in the Biblical context, the apple referenced knowledge and in the context of my painting, they are emblematic of hope, faith and the process of continuity. When you associate an object with a personage of spiritual importance, it inescapably becomes sacred and significant. The ‘Alams’ represent Bagh-e-Zehra and the fruits are sacred. It is death in the most glorious of forms and life together in this painting”.

In one painting, The Table Spread, men and women are seated at a table filled with eatables reminiscent of foods that we eat at tea, at Iftar and as offerings of ‘Nazar’ specially after a Majlis in Moharram. The contradictions are evident. The wailing guests are still in the cathartic mode of spiritual cleansing as a result of the ‘masaib’ read at the end of the more instructional portion of the majlis that recounts the tragedy of Karbala in gory detail. Some at the table are more ready to eat than others and the martyr with his bloody head sitting at the head of the table is dismayed by the apparent urgency to eat.

While Ali’s paintings mostly demonstrate restraint and control in the face of monumental tragedy, the depiction of raw blood on babies and young men is jarring and the works could do without the obvious signs of physical violence. In artists like Ali, one can sense a volatility that is sometimes reflected as a need to stun viewers and draw attention through sensationalism. So it remains to be seen whether Ali is able to sustain the thoughtfulness of his better canvases or if he lapses into confrontational sparring with the viewer where the audience recoils from his thrusts and parries of shock and awe.