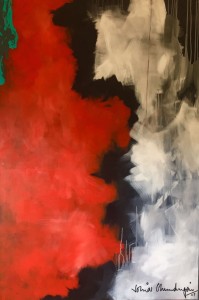 In a review on Sonia Chundrigar’s work, Momina Sibtain wrote, quoting the curator of Khaas gallery where the exhibition was held, “The use of pain is intensive…” (Momina Sibtain, “Eye Candy: Capturing the Core of Loss” in The Express Tribune, January 26, 2011). It was a typing error. She had intended to write “paint”.

What an interesting coincidence, I thought.

“Art” is “Cathartic” Sonia says. Catharsis through art is the purgation of emotion brought about by poetic expression. Aristotle, in Poetics (335 BCE), describes the effect of tragic play (the highest form of poetry according to him) on the audience as “cathartic” (tragic pleasure) induced through an emotion of fear and pity. Catharsis brought about by ritual mourning or relived trauma also form the basis of Christian and Shi’ite tradition. The Isenheim altarpiece, painted by Matthias Grünewald in 1516 depicted a crucified Christ with flagged, mutilated skin. The altarpiece was place in the Monastery of Saint Francis which specialized in caring for people suffering from skin diseases. The patients were supposed to look at the stigmatized skin of Christ and take solace in his suffering. His suffering was cathartic for them. Likewise, Jalal Toufiq describes the collective reliving of traumatic memory as cathartic in his 2005 book Ashura: This Blood Spilled in my Veins. Nietzsche, in The Birth of Tragedy (1886), describes the Greek tragedy as an art form that transcended the meaningless of life and allowed the spectators to face the tragic human condition and affirm their own existence through it. William Shakespeare and Richard Wagner are two examples of playwrights who strategically build up narratives leading to cathartic moments. Walter Benjamin again drew attention to the importance of catharsis through expression in The Origin of German Tragic Drama (1925) in which he traced the history of the German “trauerspiel” or “mourning play”.

On the surface, no link can be found between Sonia’s paintings and the Tragic play. A connection, however, can be built by considering the words she uses to describe her process. She says painting for her is “participating in a happening”. The word “happening” has a rich history in the art discourse. Allan Kaprow coined the term “happening” to describe the participatory events that he was organizing in the sixties. He was inspired by the shift from form to process apparent in Jackson Pollock’s work. In fact, the first time he used the word “happening” was in a 1958 essay The Legacy of Jackson Pollock. Harold Rosenberg in his 1952 article for ARTnews coined the term “action painting” to describe Pollock’s work which he described as an “event” rather than a picture. All these terms (happening, event, act, play, catharsis) tie Sonia’s process to the long history of cathartic expression.

Sonia talks about a “zone” which she enters when painting. This “zone” is the space between the painting and the painter. Paint lies between the two. Paint is the arena where a purgation of emotion is brought about. It is the stage where the cathartic play is acted out. This is the playful space between two bodies in dialogue. This space is magical and full of possibility – a space of transition and transformation. This zone is where fantasies live and are acted out – the twilight zone like the famous British series.

Sonia says the layers of paint in her paintings are a metaphor for sediments of memories deposited through time, some hidden underneath the others. Her paintings are palimpsests of memories. We are our memories. And if she considers her surfaces to be reminiscent of her memories, her paintings are her, or at the very least, a reflection of her mental state during the process of making. Sometimes people like to look at artworks in isolation, without taking into account the artist and the process of making. For me, taking into account the process of making is very important to understand or experience an artwork. It is important because the artwork as an object is a vestige of the duration for which it was the site of dwelling for the artist. It is actually an archive of a human being’s mode of existing; and, as such, is a threshold to another human being’s heart.

Sonia says something very interesting about her work in her statement: “A recurring theme [in her work] is the idea of compartments and compartmentalizing our lives…We compartmentalize in the face of trauma in order to cope…” The tendency of the ego to split when faced with trauma was noticed by both Freud and Jung. When confronted by a traumatic event that overwhelmed the psyche, the ego fragments itself into a part that regresses and stays safe and a part that progresses and protects the regressed part. The progressed part then splits the traumatic experience itself into memory and affect, compartmentalizing it into different parts of the psyche.

The progressed part of the ego would never allow these memories to enter consciousness under normal circumstances. But unless these memories are not assimilated into conscious experience, the psyche cannot return its wholeness. This is where the transitional space opened up between two bodies (in this case, that of the painter and the painting) proves indispensable. The protective part of the ego can be tricked into allowing the reliving of trauma in this “playful” space. The dripped puddles or streaks of paint fight for dominance on the surface of the canvas. They mix, submerge, cover or are covered. These forms are literally placeholders for emotions that surface and recede during the process of making. Thus, the healing effect of catharsis can be felt without actually having faced the real trauma. Slowly the two can merge, that is, the actual traumatic memory and its place holder within the serious “play” we call art.