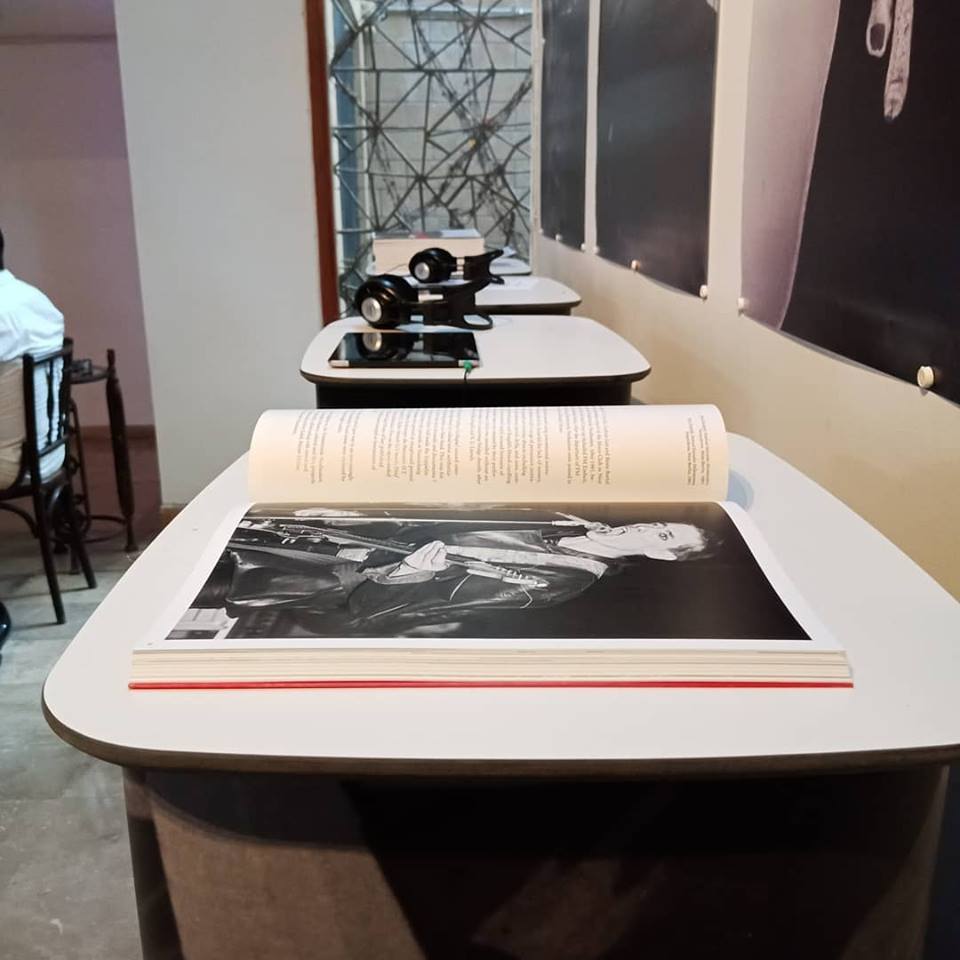 ‘Outsiders’ opened on the 16th of April at the Amin Gulgee Gallery. The Goethe-Insitut participated to form the German exhibition and the Pakistani exhibition showcased their art work in relation to the forms of counter culture in the country from the 70’s till present day.

The Pakistani exhibition was curated by Amin Gulgee, Zarmeene Shah and Zeerak Ahmed, and consisted of performances, video installations, prints and paintings.

There were two striking performances. One by Sara Pagganwala and the second performed by Amin Gulgee and Zarmeene Shah.

Sara Pagganwala wore what seemed to be an inflatable body suit. In conversation with her, she mentioned that the suit was an expression of the constant continuation of artistic movements and how there is no end to the need for an art movement to supersede another.[1]

The second performance comprised of both Amin Gulgee and Zarmeene Shah adorned in complete white, seated opposite each other with a table in between, atop which were placed irregular, angular shaped gold pieces on what seemed to be an unconventional chess board. The performance consisted of a focused concentration on a game of chess, but without the conventional chess pieces or tactics. They mirrored each others movements consciously or subconsciously, one can not determine completely.

At the end of the game or midway, one can not be sure of, there was an unmistakeable loud, manic laugh from Gulgee, and the loud clunk of metal hitting the ground as the golden angular shaped piece was flung to the floor to the victorious ending of the game, although the performance continues again from the beginning. It is interesting to note the constant smoking during the entire performance. Whether that was intended to be part of the performance or not, is not clear, although it seems likely that it was.

Among others, one of the significant works of art was a series of video installations reflecting the recent cultural narratives and the rise of social media as a way of expressing controversial actions and ideas. Videos consisted of Qandeel Baloch’s provocative uploads on facebook, Noor Un Nahar and Areeba Un Nahar’s youtube videos, the Pakistani Instagram twins taking the internet by storm with their inclusion of pop culture references and desi cultural references, Kit Kat ads that have become viral with memes, shares and reuploads on various facebook pages and groups. These have illustrated the different forms of expressing the counter culture of Pakistan. Other videos displayed some form of counter culture in the city.

Emaan Mahmoud’s Halal, Champa, Phatyma, Tim, a series of 4 prints framing the wall stood out as the images of the artist in different roles on the cover of pseudo art magazines was captured with satirical headlines of the elitist mentality of the art world.

Asim Butt’s ‘Stop, Shariat, Idea, 420, Marchoro’ digital prints from the year 2007 to 2009 portrayed the controversial political narratives Butt has explored through his artistic expression in the city.

The German exhibition curated by Mathilde Weh and Leonhard Emmerling focuses on the Geniale Dilletanten, (Brilliant Dillentantes) the deliberately misspelled title of a concert held in Belin’s Tempodrom which created waves in the 80’s and was a significant period of artistic experimentation and activity.

Many of the photographs on display were captured by the Legendary German photographer Wolfgang Burat who was also in Karachi for a week giving a talk and workshop, and also the co founder of the music magazine in Germany – Spex[2]. These photographs displayed the bands, musicians, fans, concerts, artists of the 80’s and the era of artistic revolution. Artists, film makers, designers and the work of Seven Bands are also displayed in the exhibition. The seven bands are the Einsturzende Neubauten (Collapsing New Buildings), Die Todliche Doris (The Deadly Doris), Der Plan, Freiwillige Selbstkontrolle (Voluntary Self Censorship), Palais Schaumburg, Ornament and Verbrechen and Deutsch Amerikanische Freundschaft (German-American friendship). All of these bands contributed in creating experimental and performative forms of art and music. Documentation in the forms of Interviews of film makers, audio samples, magazines, posters and artefacts were also on display.

The exhibition was not the end all, but many enlightening events continued such as the introduction and talk by Zarmeene Shah, curator of the show and performance artist, Leonhard Emmerling, an exemplary art historian and Markus Heidingfelder who is a german media theorist and documentary filmmaker. Continuing were discussions and performances by members of German bands such as Ropert Lippok from the band Ornament und Verbrechan and Wolfgang Burat who kicked off the music scene in Berlin. German photographer Wolfgang Burat and one of the founders of German music magazine Spex started off a stimulating talk and workshop on photography at Habib University. Marco Wilms, a film maker screened his film ‘Comrade Couture’ which is a look into the german bohemian fashion of the 80s. He also presented a three day workshop called ‘Guerilla Filmmaking’. Further additions included screening of ‘B-Movie: Lust and Sound in West Berlin’ a highly reviewed documentary screened at Berlin International Film festival highlighting the chaotic music and art scene of Berlin in the 80’s. And last, but not the least, it ended with the concert by Ropert Lippok at Amin Gulgee Gallery.

[1] Interview with Sara Pagganwala at the exhibition

[2] Catalogue on display at the exhibition, Amin Gulgee Gallery