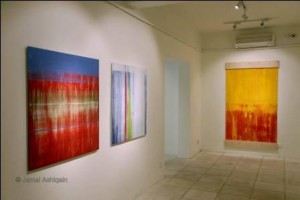 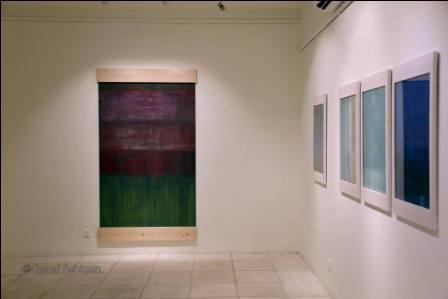 Abstract art was brought into the limelight by Koel Gallery with Ayesha Quraishi’s solo show titled “Open Presence”. Her work embodies the meditative nature of artistic practice and art making.

Her work is one that speaks to the viewer, not through words, but through a mix of fragmented feelings and emotions, incomprehensible yet overwhelming. The thread that ties all her work together is this element of being stuck in a limbo. Between the ordinary and the sublime, between the state and the senses, between creating and the creation.

In her statement, she says,“The skin, senses and states are porous through which one may sieve into open presence, where everything touches everything.”

It is this porosity that is effectively translated into her visuals that strike the viewer and make them lose themselves in just how raw it’s subject matter is.

Her body of work comprises of digital prints, paintings and sculpture but holistically, her visuals are an amalgamation of lines, blurs and haze that draws you into itself.Textures seemed to play a role in her work as well. It was a visual documentation of the process of making art; one could deduce the additive and subtractive process of art making – applying paint and then scraping it off and making it take a form of its own.The colour palettes were also smartly chosen with ochre, umber, black, white and other such neutrals took over the work space with colour accentuating the pieces – either in the form of maroon or tints of turquoise – never too striking, never too bold, yet completely alive in it’s freshness.

Even though her works are abstract, it’s as if her paintings are flashes of very real, existing things. Some of her paintings almost have a landscape feel like ‘touching blind – inside out 7’ and ‘in the absolute presence of a distant light’ where one can almost spot the horizon line and an unfathomable depth. Her other piece ‘touching blind 6’ is a reminder of flashing lights, perhaps of cars on the road amidst driving on an inadequately lit road. ‘Touching blind, inside out 5’ reminds me of trails the rain water makes on the windows of a car on a cold night. And this i believe is the strength in her work; people can see what they want to see, and they’ll relate to it as strongly as another – who may see it as something completely different; because, what they see in it is a fragmented emotion that is very real and raw to themselves.

Ayesha Quraishi’s work is one that can only be felt, not explained. What can be said in all surety is that her work is incomprehensible, but completely relatable and thereby, sublime. As the title of one of her paintings phrases it aptly,“.. open presence, where everything touches everything.”