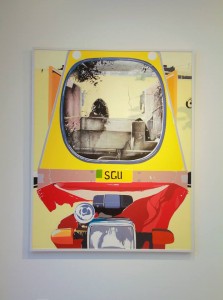 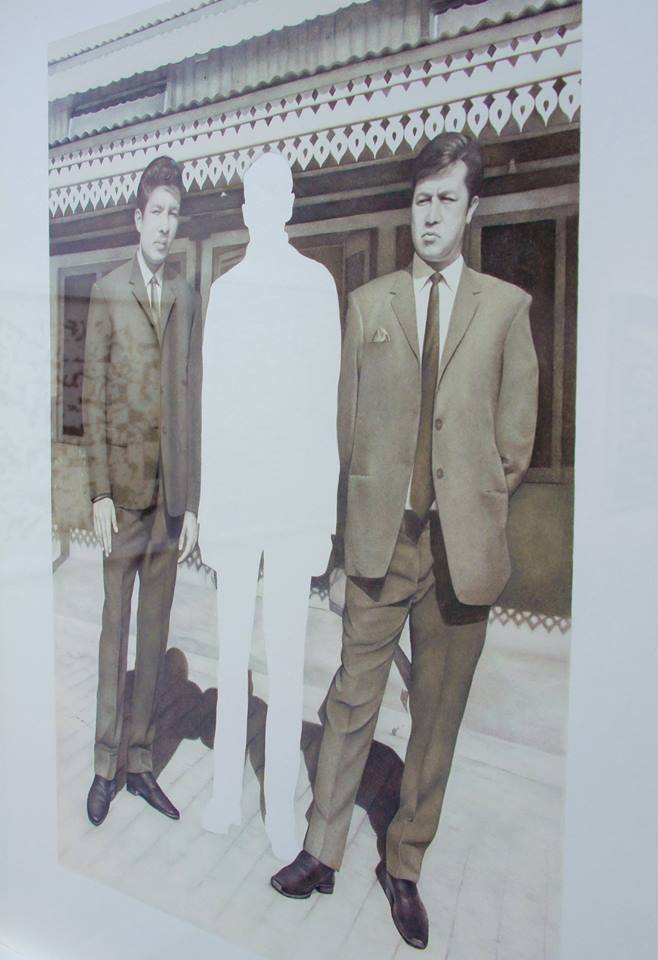 Of Absences and Empty Spaces

Upon entering the gallery, the viewer is met with Ahsan Javaid’s compelling diptych Day and Night. This artwork is an extension of his previous works that use cloth in an acrylic box. He chose second hand under garments from Lahore’s Landa Bazaar to create the black and white ensemble. This particular piece emanates an almost tangible duality of Yin and Yang, where both forces interact to form a dynamic system in which the whole is greater than the assembled parts. In his own words, “Information that reaches us is a collection of cropped ideas sometimes by us, sometimes by others. It depends on how well we paste them together to form a picture of our very own reality.” Ahsan uses various methods to crop information from a variety of media, including references from newspapers, magazines, popular imagery and history in his other works on display.

The next piece is by Hamid Ali Hanbhi, titled Colors of Paradise, putting playful spin to the concept of men getting seventy Hoor Al’Een in Jannah. The brightly colored burqa-clad figures are painted on a large canvas trying to capture a part of the realm of the unseen of which we have very limited perception. He touches upon a topic of discourse which begs each of us to delve deeper into our fixed perceptions. His other piece, Kali Shalwar is inspired from the Urdu short story “Kali Shalwar” by Sadat Hasan Manto. He has painted this black traditional garment on a dark surface objectifying it to yet again touch upon taboo subjects of sexuality.

Ehsan Memon brings us back to his thesis days of the bread installations by his new pieces Girah 1 and Girah 2. Girah is a bite sized piece of a roti which he has used graphite and charcoal to recreate in his new works, trying to explore his visual vocabulary of the past as an artist. Syed Hussain’s skilled miniature paintings of old photographs titled Album Series-1 and Those Who Traveled-15 & 16 touch upon the pressing issues of the Hazara community. He has left a human shaped empty space in the middle of the painted photograph trying to capture the way people go missing in the Quetta target killing. These usages of photographs which are concrete evidence of a fixed moment in time highlight effectively the profound nature of the problem that creates not only a physical displacement but also a mental trauma for a whole community.

At the end of the line, Unab Sumble’s Profound Reflection-1, assimilating the nature of shadowy figures, leaves the viewer with an uncanny feeling. She has painted an everyday scene in such a way that one is able to project the tell-tale signs of a deeper concern within the artist. This group show is a commendable effort by the six artists to explore and maintain their practices and remain active in the fast paced realm of the art world.