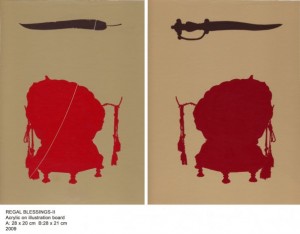 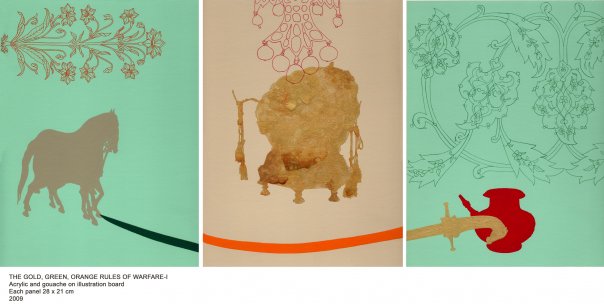 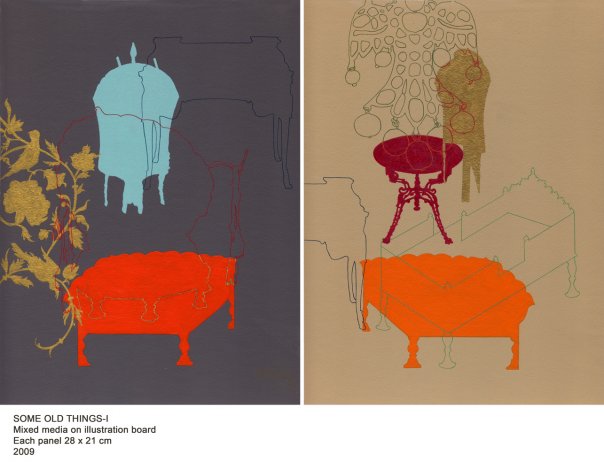 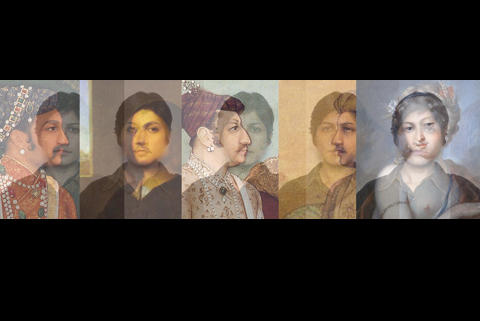 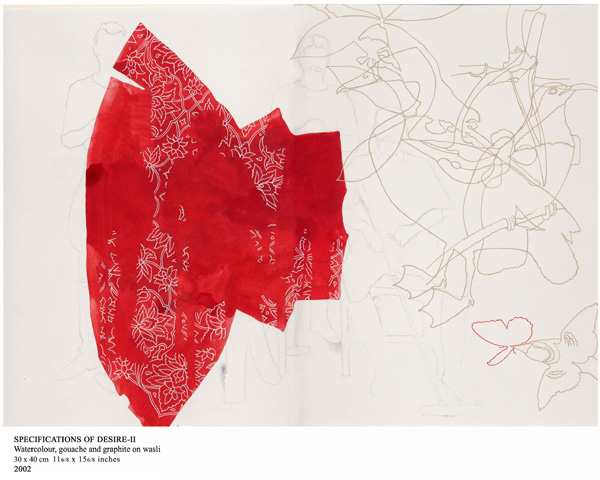 Nusra Latif Qureshi is a neo-miniaturist trained at the National College of Arts, Lahore. She presently works and lives in Melbourne Australia. ArtNow talks with her about her work and her concerns as a diasporic artist

ArtNow: Why is miniature close to your heart? Why did you choose to do this instead of any other medium like sculpture or painting?

NQ: I find certain elements in this mode of painting very appealing. For instance, the attention to detail- which does not necessarily mean miniscule elements- makes the practitioner of this medium consider each and every component in the image. In older paintings, especially of Mughal era, the considered use of colour to emphasize certain areas is quite fascinating. This style of painting carries within it a particular sensibility and aesthetic that is distinct from other modes of painting.

AN: The work exhibited at The Rising Tide show in Karachi, shown previously in Venice, was a leap away from your traditional output. Why did you choose the holographic images instead of a miniature?

NQ: I have been doing prints for a few years, but not on this scale. Digital media offers interesting parallels to miniature painting. I became particularly interested in the device of layering which I have used in painting for some time and was keen to explore and see how it could be manipulated in a digital print format. The opportunity to explore the layering in digital format arose when I was asked to make a work specifically for the project ‘East West Divan’ in Venice Biennale. There was enough space and the production was funded which made the whole process easier. If you remember the image ‘DID YOU COME HERE TO FIND HISTORY?’ it has two overlapping images in most frames.

AN: How do you resolve immediate, current issues with the images of ancient royalty and kingship? Do you want to possess the post-colonial space in Pakistani art?

NQ: If I sum up the whole issue, it would be in these words: “we live in very interesting times indeed”. The scenario becomes even more interesting when we consider the bizarre situation of every noble ideology becoming a cheap political slogan and every complex idea presented with copyrights of celebrity artist and an accompanying price for the free market.

The use of symbols is not new in art. It is a certain way of saying things.

AN: Your vocabulary includes an architectural and textile type patterning. Where does that come from?

NQ: Most of these are textile patterns. My interest is based on the debate about their origins, for example where did the paisley motif come from? Or that certain patterns have multiple cultural associations and how some of these are thought to belong to certain religions. I am interested in exploring the aforementioned ambiguity and in that process placing the patterns in contexts where they add to this ambiguity. The use of pattern also refers to cultural influences of one culture over the other, for example the process of colonization. In this context, I use pattern as an imprint over a set of figures-human or animal. Recently I have used a motif from Taj Mahal, and that is skewed and repeated over a set of figures. This work explores the idea of establishing authority.

AN: What is the significance of animals in your work? We find everything from tigers to crows, ducks and fish.

NQ: These images mostly come from natural history paintings made during colonial rule in a particular area like Australia, India, and the Pacific. Other images come from colonial photographs of the same regions. In my work they refer to an erased past. As some species in the colonized countries became extinct due to over-hunting or introduction of disease, so were many other natural and man-made resources. The animals and birds become symbols of that loss that occurred through cultural and political colonization.

AN: Do you think western audiences take to your work because they find its orientalism fascinating?

NQ: I think that would be a negative assumption. As far as I am concerned, the production of visual culture historically has been much more complicated than the mere division of ‘east’ and ‘west’. And if any such fascination exists within eastern or western audiences, there are plenty of artists producing that material; I certainly do not find myself in that category.

AN: There is an understated sexual reference in your miniatures. What role does sexuality play in the work?

NQ: I would not quite put it that way. There is certainly a use of sexual tension. This is mostly in the context of exploring the political nature of human relationships. The enquiry is done from a woman’s point of view, thus a lot of figures in my work become outlines as if they are denied a reality. This ‘omission’ or erasure is not necessarily that of the female figure, but depending on what the painting is about, can be either male or female.

Another aspect of this use is that the human figure in some works is symbolic of a culture, or a certain phase of history. This use is made in the context of colonial pasts. I would also like to mention that I selectively use existing images (from historical paintings), which have a certain sensuality about them, particularly in Pahari paintings.

AN: How often do you return to Pakistan to visit or exhibit? Do you feel it is important or irrelevant to show at home?

NQ: I visit nearly every year and have shown in Karachi quite a few times at Canvas, Chawkandi and of course at Mohatta Palace Museum. But it is a coincidence that I have not been in the country for the openings. It is quite important that I exhibit my work in Pakistan as many of the themes I deal with are as relevant to the audiences there as anywhere else in the world. I find that presenting my work to people in Pakistan brings many interesting insights because of the shared cultural understanding