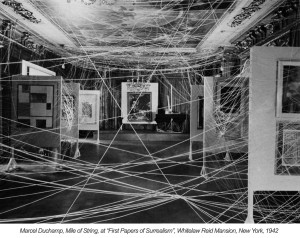 NOTES ON CURATING: THE CURATOR AS MEDIATOR

The meaning of the word ‘curator’ – and thus the role assigned to the individual – has undergone massive shifts in understanding over the last several centuries. In Ancient Rome, the curator occupied the space of a senior civil engineer, whose job was the management and overseeing of the empire’s aqueducts and bathhouses. In the medieval period, this word came to be rooted in the Latin term cūrāre, which translates to ‘caring for’ or ‘attending to’, which would explain the use of the term in the context of the curatus, or the High Priest who was responsible for the care (cura) of souls, ensuring their safe passage into divine promised lands. It was in the 20th century that the word curator came to define an individual associated with a museum, one who cared for and came to meticulously research and set out its collection, poring over books and ancient objects, organizing and reorganizing the display of these to the public. This is perhaps also where the notion of the curator as one who came to assign meaning first emerged.

The study of the curatorial practice, or any writing on the subject, is therefore an investigation of modes of thinking and exhibiting, of meaning-making and assignations, of discourse and display. How does the way in which art is presented come to form the ways in which art is thought about and understood? How it is conceptualized and contextualized, interpreted and assigned meaning and value in the context of a larger public that would then take its cues from such an ascription and dissemination, coming to define a larger understanding of art itself?

Today the word ‘curator’ has taken on an expanded field, where anything from food to music to retail stores and websites are ‘curated’ – viewed within this field, the role curator becomes that of an organizer, or one responsible for the aesthetic and marketable display of content at large. In this model, the curator then takes on the role of anywhere between producer to technician to organizer to programmer, builder or problem solver. While this is not far from the truth, our discussion on the subject does not explore this particular (and popular) phenomenon in depth; instead it roots itself in the subject and realm of art, the field of which itself has become thus expanded that dialogues within this can no longer be viewed as successively linear, but rather as a decentralized network of interlinked nodes, horizontally unfolding and extending, forming a field of rhizomatic connections.

It was in the 20th century, more precisely perhaps in the 1960s, that the truly radical shifts in the field of curating began to emerge, concurrent with the transformations in modes of thinking about the conceptualization and production of art itself. In this context, one can then also cast one’s eye further back to the 1920s, more specifically to the practice of Marcel Duchamp, who would not only come to change the ways in which artists would begin to think about the space in which their work was exhibited[1] (and their intervention into this), but also in the reframing of the object came to reassign its meaning and therefore to enact what would become the central discussion around curatorial practices in the decades to come. In 1969, Seth Siegelaub would speak of the art object as different from its perception and reception, how “art was a different thing to how information about it was provided.”[2] (Was Duchamp then the primary curator within this expanded process of production?) For Siegelaub, consequently, the artwork could be divided into its ‘primary information’, which was contained within the work itself – the “essence of the piece” – and ‘secondary information’, which was embedded within the form of its presentation and in the information made available around the art object, which came to define how one became aware of and thus perceived and interpreted the object.

Thus the curating of the work of art became a critical lens through which the modes of presentation and distribution of art (as propounded by the curator) became inseparable from the meaning that came to be attached to the work. The curator thus became mediator – the instrument/channel through which the discourses on art would come to be generated, and the creator of a particular kind of site of production: that associated with the making of meaning and value in the context of an expanded field of cultural production. In these conditions then, the word ‘site’ becomes a particularly layered and stimulating point of consideration.

In his essay ‘The Curatorial Turn: From Practice to Discourse’, Paul O’Neill speaks about the site of the (contemporary form of the) biennale as a critical consideration in the dialogue around curatorial practices since the 1980s[3]. O’Neill speaks of the general acceptance of the group exhibition (particularly of the large-scale, international variety) as the primary “means through which contemporary art is now mediated, experienced and historicized.” In this context, biennales become particularly viewed as a site that is able to provide a platform existing on an “inter-national, trans-national and multinational scale, where the ‘local’ and the ‘global’ are in constant dialogue.”[4]

Such exhibitions, according to O’Neill, have not only become potentially momentous in the recognition of certain artists and artworks, but also the vehicle through which a much greater respect came to be conferred upon the curator. These large-scale, temporary exhibitions then not only became entities within their own right, but also spaces capable of generating some of the most significant critical reflection around art, with the curator at the center of the dialogue.

The group exhibition then became the mode through which curators were able to reclaim the long-lost space of the dead author. In his 1968 essay ‘The Death of The Author’[5], Roland Barthes expressly denied any power given to the originator of the text, i.e. the writer. According to Barthes it was unnecessary to look to the author or producer of the work in order to interpret or understand it; the origin is irrelevant. The author need not explain the work to the reader through his being; instead, the creation of meaning in the work would come to be formed through the reader’s interpretation itself. This active interpretation or participation came to define an act of liberation from the ‘tyranny’ of any meaning imposed onto the work by the author, thereby taking apart the ranks or superior position granted to the author and in doing so, restoring equality to the process. In the absence of this obstacle of information on the life of the author, the work was able to grow independently, instead of being stifled under the shadow of intended or supposed meaning. The work was set free from the author, and placed directly into the hands of its audience, who were free to do with it as they would.

An equivalent to this view can be drawn with performance practices and relational work from the 1960s and 70s, particularly in America. Examples from these would seem to support this stand: 1971, Vito Acconci would whisper secrets to people who approached him as he stood at the end of a deserted pier in New York, while Marina Abramovic allowed her audience to cut away her clothes or even force a gun into her mouth, and Paul Thek invited spectators who came to see the ‘natural theater’ of his ‘Processionals’ to touch, pick up, sit on, even move parts of the work around in order to become part of the creative act of the making of the work. Almost thirty years later, Rirkrit Tiravanija would cook meals shared by the audience in attendance at his shows in an act of communal coming together[6], and viewers can still walk away with candy from Felix Gonzalez-Torres’ installations.

In 2006, Claire Bishop, in her essay ‘Viewers as Producers’, would take up these same issues by drawing exactly such parallels between contemporary artists and their practices with the performative and participatory works of the sixties and seventies, building the case for the ‘emancipation of the audience’ through this engagement, for the desire to create an “active subject…who will be empowered by the experience of physical or symbolic participation”[7] in the hope that these “newly-emancipated subjects of participation will find themselves able to determine their own social and political reality”. Bishop sees the impact of this work to be exceedingly relevant particularly in the current social context, spurred on even more by the fall of Communism and the need to rebuild social relationships based on the collective.

The concerns of  “activation, authorship and community”[8] are all seen as critiques of and an intervention in the capitalist system of hierarchies, viewed as lying at the heart of such work, as well as the attempt to create an equal platform which enables the exchange of dialogue and exchange as a collective, binding act. In this context, the collaborative or participatory performance becomes a symbol of the ceding of authorial control and status, allowing for this emancipation of the spectator through the breaking down of these hierarchical, assigned roles and enabling the creation of this equal footing. As Barthes would say, the ‘true place’ of the work would not be found in its source, but instead in its reading: “The reader is the space on which all the quotations that make up a writing are inscribed without any of them being lost; a text’s unity lies not in its origin but in its destination.”[9]

This idea of criticality and text then became central to the proposition of the reclaiming of the authorial space by the curatorial practice. In the above-mentioned essay, O’Neill also refers to the (by and large) now redundant role of the art critic, where curators have come to be the direct mediating force between the artwork and the public, and to generate the key dialogues and writings around artworks. With a proliferation of curatorial summits and symposia dedicated to this discourse, as well as talks and lectures, seminars and conferences becoming central to the proceedings of large-scale exhibitions, the publications produced through these along with exhibition catalogues are now almost categorically seen as the sites of critical, intellectual, socio-political and cultural production, through which some of the most important texts on these subjects are generated, and ideas and understandings around these are disseminated.

The figure of the curator as mediator then not only allows for the creation and expansion of the fields of meaning-making and dialogue around art, but also seems to emerge from within this space as a central figure located somewhere in between praxis and practice, between the artist, the artwork, the audience, and all of the mechanisms of display, dialogue and dissemination in between these. In this in-betweenness, the curator is almost as some kind of mythical being, able not only to contain vast amounts of information on a boundless number of subjects, but also to be responsible for its distribution and circulation, and this too within an all-encompassing, expanded field of ‘directed emancipation’ so to speak. The curator as mediator comes to occupy several spaces at once then, being as indefinable as the (ironic) definitiveness of subjective ‘truths’ articulated through the curatorial frame, while simultaneously holding the power and capacity to permeate and burst open the frame at any given moment.

[2] Seth Siegelaub in an interview with Elayne Varian, June 1969, cited from Alexander Alberro, Conceptual Art and the Politics of Publicity, MIT Press, 2003, p. 56

2 Responses to NOTES ON CURATING: THE CURATOR AS MEDIATOR