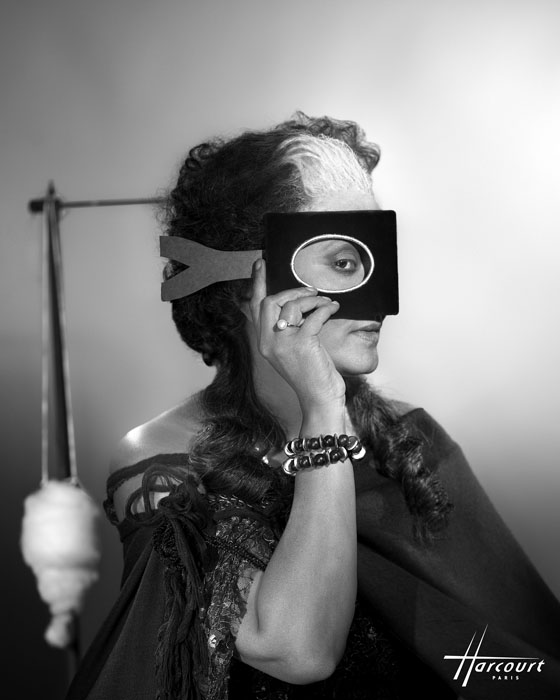 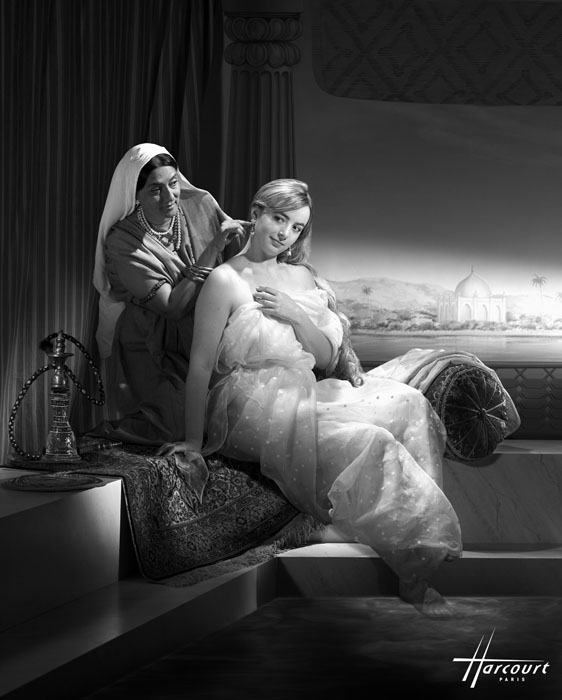 N. Rajyalakshmi: Miss Pushpamala, why do Indian artists imitate the West? Shouldn’t you be more Indian?

Pushpamala N.: Imitation implies blind copying, Miss. Rajyalakshmi! Why should Indian artists or ‘Third World’ artists be restricted to our ethnicity? Why can’t we take from forms current elsewhere and use them to break the norms here and to intervene in our reality? Our identities are not so fragile! The Kannada writer B.G.L. Swamy has written a book called South America in Our Stomach in which he talks about all the foods that we use in our cooking which originate in South America. Even the chilli that we think of as so quintessentially Indian was introduced by the Portuguese in colonial times.

There is an assumption that a person’s subjectivity is formed by what they eat, read or see. But if the British eat a lot of curry, they are still seen as British eating curry. And if Indians eat only curry, it doesn’t mean we are not colonial in our thinking!

NR: Do you think you are representing real Indian culture?

PN: Maybe I am not interested in representing ‘real’ Indian culture at all. I critique it. The Hindu Right has appropriated the right to define Indianness – and all these definitions come from the European discipline of Indology anyway, which vested feudal interests use to prevent social justice and questioning of the status quo.

You know, I have been working with hoarding painters to create tableaux for a recent art project ‘Native Women of South India’ which deals directly with ethnography. I discovered that hoarding painters designed everything in Bangalore from public arches, temple architecture and ashram complexes to film sets and TV serials, theatre backdrops, festival tableaus and political cut outs. These are the people with their weird, kitschy, eclectic mix of images who are defining ‘real’ Indian culture, creating a strange continuum between dream, commerce, reality and exploitation.

NR: Madam, you are a trained sculptor. When we have an old tradition of stone carving, why do you do this performance photo work, imitating cheap films?

PN: Susan Sontag writes that photography in essence is not an art form at all, but rather, like language, has the capacity to produce both mundane and artistic forms. It is a kind of vernacular and I am interested in the vernacular! It connects directly to the real world.

NR: Your work is funny! Is it art or entertainment?

PN: I like to use entertainment and the forms of entertainment to say something serious! Brecht said in the 1930s that theatre should be like a game of football – quick, lively and entertaining. You hold the audience’s attention while you make them think and question.

NR: What about the style of your work?

PN: I’m afraid I have been completely formed by being a South Indian and growing up here reading P.G. Wodehouse and Mad magazine, Miss Rajyalakshmi! The South Indian languages are quickwitted, full of satire, irony and sarcasm. There is a lot of punning and wordplay. I love slang and idiomatic forms; they hit the nail on the head! I try to use visual language in the same way. I’ve always loved Indian silent cinema which uses inter-titles in three languages – local language, national language [Hindi] and international language [English] – sometimes each saying completely different things.

NR: Who is your audience?

PN: I like my work to be layered. I use familiar themes and humour but there is always an emotional undercurrent of autobiography. I do think of my audience as primarily Indian or sub-continental, who would understand the background and nuances. My images act like half-remembered things that people never really experienced…

I recently went for a lecture by the political scientist Dr. Partha Chatterjee on the new globalism. He compared it to late 19th century imperialism and how British philosophers had given legitimacy to colonial conquest by propounding the idea of a civilizing mission. I later talked to him about how, for the project “Native Women” we had used a photograph of an Andaman islander from a notorious mid- 19th century British anthropometric study, which compared the measurements of the skulls of ‘primitives’, lunatics, prostitutes and criminals. He told me that in fact these Andaman islanders had been brought to Kolkata to the Indian Museum and displayed in glass cases there for public viewing. The photographs of these exhibits were still there in the archives.

At my Bangalore show last year, the Kannada literary critic Ki Ram Nagaraj had a very interesting response to my work Dard e Dil. He said the way the architecture of the old mansion was used as a character in the story, made him think of the ‘linguistics’ of the homes of the Kaadu Kurubas or honey-collecting tribes, who had what he called an elaborate ‘grammar’ of space.

All artists dream of an ideal community. I try to keep in touch with the progressive thinking of the time, and to connect to a network of creative people who form my ideal audience and the context for my work.

NR: People say you are a narcissist?

PN: You know, I love the scene from Silent Movie where Mel Brooks and Marty Feldman go to meet Burt Reynolds. For several miles leading to his house there are enormous billboards with his picture pointing the way – when they finally reach his mansion you see ten signs saying Burt Reynolds Lives Here. And then it cuts to his bathroom where he is taking a shower, smiling into the mirror and soaping his armpits – it’s hilarious! When you stretch something beyond a point, it becomes ridiculous. I’m making fun of myself!

The Mother Goddess is worshipped in the form of a polished metal mirror in certain shrines in Kerala. The mirror can be used to examine the soul, not only the physical body.

PN: Perhaps masquerade has been integral to the idea of India as a nation! Indian Nationalism defines the country as being made up of diverse ethnic communities co-existing happily together. In the silent film Wildcat of Bombay, the heroine Sulochana had eight separate roles – herself, a gardener, a policeman, a Hyderabadi gentleman, a street urchin, an European blonde, an old banana seller and an expert pickpocket who gives her money to charity! Every year on Gandhi’s birthday, people dress up as Gandhi and walk miles with a stick to garland his statue. Recently I saw a picture of an activist leading a police rights demonstration dressed as a policeman!

Indian newspapers always have pictures of politicians going to remote areas of the country and dancing with the tribals, wearing the local headgear, or masquerading as mythological heroes. There is always the tension between the self and the Other, the mainstream and the marginal…

NR: What about the common man?

PN: Art is seen as something elite and superfluous to the life of the common man. Yet everybody makes and enjoys some kind of art. It is a way of exploring the world! Art making is the sensual expression of the larger world of ideas and a society which muzzles art expression or ignores it, becomes barren and impoverished, Miss Rajyalakshmi.

For the last ten years there have been increasing attacks on art shows, films, plays and books because they ‘offended the sentiments’ of some group or other, or were ‘against Indian culture’. We have to ask ourselves why we feel so weak and threatened that we cannot tolerate any questioning, any criticism.

NR: What is the artist’s role?

PN: In a postcolonial country like India, artists have seen their role as developmental and have worked to build institutions and the infrastructure for creative life to flourish. The artists I admire are scholar-writer-teacher-artists. I believe the creative subjectivity and the anarchic individualism of the artist resist the homogenous culture demanded by both a feudal society and by a globalizing world!

NR: Do you find it easy to be a woman artist in India?

PN: The Nationalist movement in India released certain energies where a woman could enter public life. The first modern artist in India is considered to be Amrita Sher-Gil, an Indian-Hungarian woman trained in Paris. She was a contemporary of Frida Kahlo and died at 28 in 1941. Women artists of every generation here are active, vocal and doing some of the most radical and innovative work! You have to consciously make your space and hold on to your territory. But it’s not easy! It’s still a patriarchal society and there are many pressures…