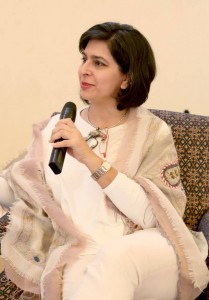 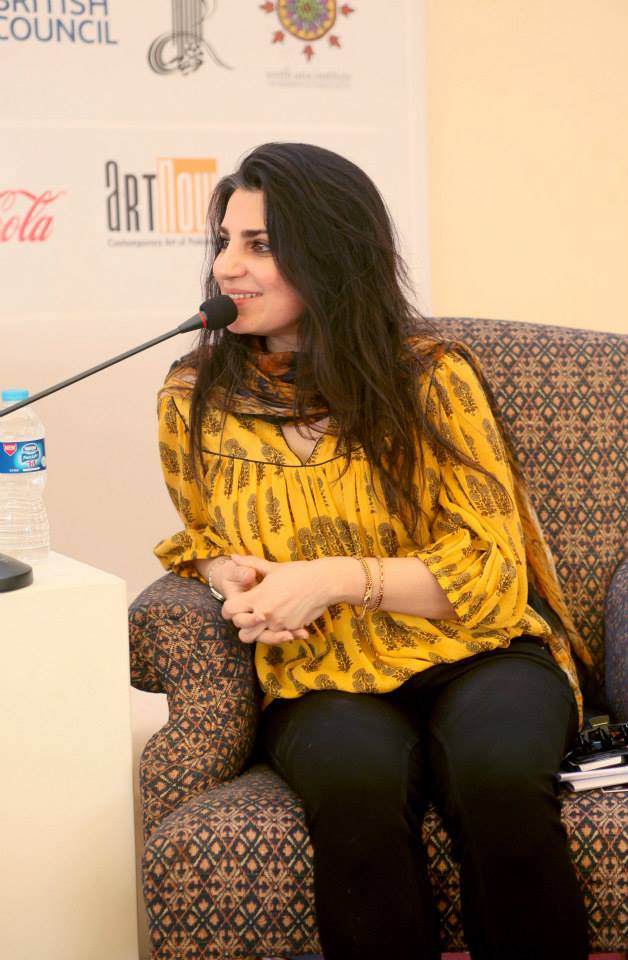 Born in Bahawalpur in 1968, internationally acclaimed visual artist Naiza H. Khan studied at the Wimbledon School of Art, the Ruskin School of Drawing and Fine Art and Somerville College at the University of Oxford. She is the recipient of several awards including the Unilever Lux Award for Visual Artist in 2002, the National Excellence Award PNCA in 2003, the 43rd Premio Suzzarra in 2003, and the 2013 Prince Claus Award for her achievements in the field of culture and development. She is a founder and former co-ordinator of the Vasl Artists’ Collective.

Khan has over the years gained global acclaim for her work. She has explored the form and very essence of the female figure, producing an extensive body of work based on female sensuality and the various social paradoxes that encompasses it. She interweaves the personal and the political through the use of various mediums; her 2008 exhibition ‘The Skin She Wears’ featured a series of sculptures, made in galvanized steel, of garments that were a cross between lingerie and armour. Khan’s work has also focused on Karachi and its constant political unrest and the plight of Manora Island.

She has produced considerable amounts of work related to Manora in order to highlight the ongoing situation of the terrain and what she regards as representative of what many other cities in the region are experiencing. What was once a sought after picnic spot and a calming reprieve for residents of a bustling metropolis is now slowly deteriorating. At a point in time Manora was home to the island’s attractions, amongst them a primitive jetty, the pyramid-shaped Varun Dev Mandir Temple, the Manora Lighthouse and St Paul’s Church.

Battla emerged on the Pakistani fashion scene in 1999 when she opened her first fashion boutique. Using the highest quality of fabrics, each  of her collections claims a uniqueness of style, created by colour, innovation of patterns and drape with a hint of ethnic embroideries and other renditions making them interesting in their own space. She is inspired by nature and handcrafts, yet keeps the silhouette modern and cutting edge while keeping an attempt to configure negative and positive spaces to lend perspectives and rebalance proportions in order to create new work. Tailoring and draping has been central at ‘Sonya Battla’.

Both Khan and Battla appeared at ArtNow’s art section at the KLF 2015 for a panel discussion regarding their collaboration. ArtNow interviewed Khan and Battla via email for a more in-depth look into the journey and process that went into the collection.

ArtNow: Where did the idea for the Manora Collection stem from? Is there a specific reason for choosing designer fabric as a surface?

Sonya Battla: I wanted to work with a contemporary Pakistani artist and had loved Naiza’s work from 2008 so I asked her to revisit the work and this time collaborate with me for a medium new to her, which was fabric, and she seemed to like the thought.

Naiza Khan: Sonya and I have known each other’s practice for several years now, and we have had many conversations about fashion/process/art and what this means to us as creative practitioners working in Karachi. So in 2009, we collaborated during the Karachi Fashion Week, at a time when Swat was going through an insurgency, and the streets of Karachi were torn with strife. In 2007, I was working on soft sculptures related to attire, for an exhibition called ‘Heavenly Ornaments’. Sonya gave me support in making some of these fabric sculptures.

I love the way art and fashion can conspire and mix to take totally new and exciting directions!

The idea of the Manora line came about very intuitively.  Sonya was visiting my studio and over conversations around the work, we thought we would try something out…so this is how it began.  I think Sonya could see the potential of the images translated into attire, and she had a strong sense of how these could be used on fabric.

AN: You mentioned in the the panel discussion at KLF that the idea was for the “body to be moving through the landscape”. If you could please further elaborate on this?

NK: Well, I think that is an interesting idea…that the body does move through the landscape and this landscape in turn becomes the skin for the body through drapery. It makes me think of my long meandering walks through Manora Island. With Sonya’s collaboration, I was intrigued to feel the sensuality of the landscape wrap around the moving body and I sensed a transformation I did not expect. As so much of my work has been about the body, it was great for me to see the possibility of the body returning to the work in such a dynamic and fluid way. This is revealing about the nature of image making. I feel that the images are so adaptable, when they are translated through another medium and through the sensibility of the designer.

AN: The panel also discussed fashion as being a means for art to reach a larger audience. Do you feel that for artists this could prove to be a vital aspect in promoting the arts especially here in Pakistan?

NK: Yes, the work does reach a different audience, and is received in completely different ways.

It is a fantastic way to promote the arts internationally as well as locally!  There should be more artist-atelier collaborations, which carry forward ideas that visual artists have conceptualized. After all, these are all home-grown ideas, which are rooted in our visual sensibility.

When I began to visit Manora, I was drawn to the open space of the island and its history. We forget in Karachi that there is a maritime landscape alongside the urban landscape of Karachi.  And so I was interested in the architecture of the sea, and how it has shaped our history and land.

I feel art and fashion have a vital connection; both are strong statements of our emotional being and how we see ourselves and want to be perceived. Historically, artists and fashion designers have always merged ideas and imagery to create new ways of seeing and imagining. We are part of the same breed, and in the end, feed on very similar sources of inspiration, even though the end products may be specific to our craft.

AN: The Manora series has been an ongoing project for you and one which you have explored in several mediums. Was there a certain thought behind the Manora collection only aimed at a female clientele, to have the female figure draped in the visuals?

NK: Yes, Manora Island is a landscape I have explored over several years, and it has evolved through multiple processes so that I could excavate its beauty and history. The idea of images that carry the feeling/temperament of the land, scaled onto attire that is carried by the body is another feature that has carried the work across a different medium.

I don’t think it needs to remain within the ambit of a female clientele. There is certainly scope for the Manora line to expand into a collection for men.

AN: Could you guide us through the process in terms of designs, cuts and material through a designer’s perspective?

SB: Process is the same as any collection. Starting with inspiration and research etc .The interesting part was that I had a partner who was equally inspired or perhaps more inspired by the theme than me so it seemed to work beautifully as a process.

AN: Do you feel collaborations like yours and Naiza’s are the stepping stone for other designers and artists to come together especially for causes?

SB: Fashion is an intelligent tool to get one;s message out there; like artists, designers too draw their inspiration from their inner selves and emotions. Collaborations are the way forward in all walks of life.

Images of sketch and launch courtesy of Sonya Battla.