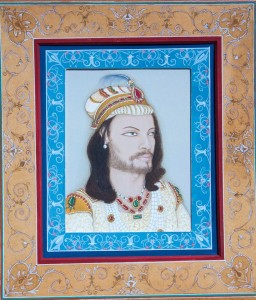 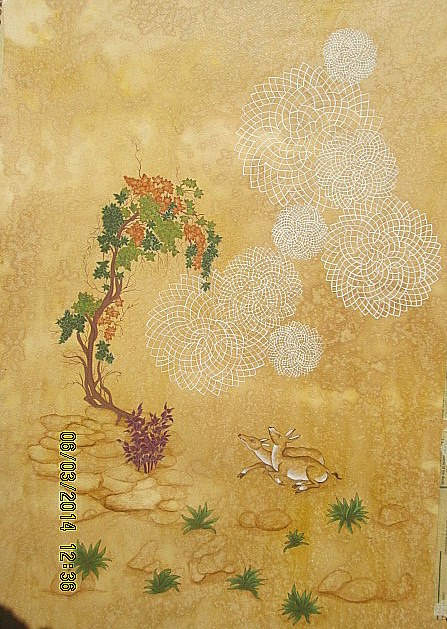 Miniature painting is one of the few vehicles of Indo-Pak art forms that makes it into the western imagination. As culturally misapplied as it is, the miniature painting conjures up images of the hazy Orient, hookas, opulence and mystery; Arabian Nights and Bollywood fused in an unholy marriage that the outsider never considers may offend.  As such an outsider, albeit with a little more sensibility to appreciate miniature painting for the true art form that it is, not its British designation as “craft” I was excited to hear that Jharoka Gallery in Islamabad was holding an exhibition of contemporary miniatures.

Aside from prints in books or online, my most recent exposure “in the flesh” to miniature paintings are those housed at the Mughal Gallery at Shahi Qila – the Red Fort in Lahore. Needless to say I was keen to be drawn into the paintings showing at Jharoka as I was with those at the Fort. With this highest of expectations, artists Carol John and Talat Fatima were, I admit, unfairly pitted against the masters of the art. Upon entering the gallery I immediately realized that I needed to adjust my expectations and leave the miniatures of the Red Fort behind: this was an exhibition of contemporary miniatures, which is quite a different thing.

Talat Fatima takes the most risks in changing the nature of what we expect of the miniature medium, with varying degrees of success. She explores the addition of elements unusual to traditional miniatures; geometry, dots, dashes. Her work in this exhibition is more focused on nature than on depicting figures, “My subject matter depicts movements of natures,” she says, and we can see in her depiction of two deer how this can work beautifully. The fawn color background and white geometric flowers in the right corner perfectly match the colors on the two deer, sitting together beneath an intricately constructed tree, leaves on the verge of turning golden and autumnal. The delicacy of the miniature here meshes well with the mottled background, which give an almost tea-stained, aged look to the picture. Her sunflower paintings, however, don’t really achieve this balance. The skill of someone trained in miniature painting is evident in these pictures, however the subject matter, or perhaps the composition renders these a little too one dimensional to capture the attention for long. Talat Fatima is straddling the fine line between exploring the depth of possibility in the miniature art, and producing paintings that are just, well, small. Her paintings of seashells do this more elegantly, adding an almost Polynesian twist on the miniature which works surprisingly well.

Carol John sticks closer to the traditional images that miniatures are famous for. John, who apprenticed for three years with Ustad Bashir Ahmad – one of the last real masters of the miniature art – has stated that she aims to bring back the popularity of the art. “I want to revive the traditional miniature painting and its elegance,” she says. John is clearly at ease with the demanding techniques of miniature painting and captures the feeling of fairytale that so often accompanies the miniature. Traditionally miniatures were often the illustrations for classic folk tales or scenes of Mughal court life, and this is the kind of evocation that John brings to her work. She is not, however, simply reproducing images from a bygone era; her portrait of a young man, which looks for all the world like a Mughal emperor, is in fact a portrait of her cousin. This adds another dimension to the portrait, making it a very modern take on an ancient art form.

Both Talat Fatima and Carol John are bringing their own meaning and their own interpretation of what miniature painting can be in a contemporary setting. It’s interesting to see the range of exploration in their work, and it is thought-provoking in that it challenges the concept of the miniature that most viewers will come pre-programmed with. The show has left me with unanswered questions though. What does it mean to be a miniaturist in this day and age? Do we define it through a set of skills, a style of illustration? Is it just about making art on a small scale? Or is it a mood, a feeling, a flight of fancy that the viewer feels? Perhaps it’s a little of all. One thing I was left with after the show was the impression that these artists are doing a commendable thing here by making the audience reconceptualize the miniature not just as a part of the past, but as an evolving art form that, yes, evokes a long-gone era, but also has a future in contemporary art. ♦

Cosima Brand is an editor and writer living in Pakistan