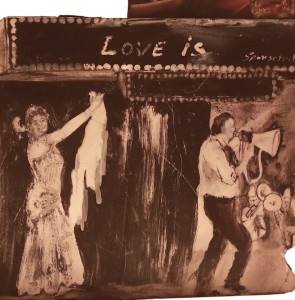 “It travels, flies and takes a look from the highest cliffs and lowest oceans, to history, people, life, death, cinema, love, displacement and war.

Spotting locations, lights, sites and times is a theatrical play, drama and hallucination of a thousands stories within stories.

Constructing theatre was like a third person entering and exiting the scene.”

As one enters Masooma Syed’s recent solo show at Canvas Gallery titled ‘Spirits’, the dimly lit, atmospheric space draws the viewer in. One is enticed by the array of pieces on display that cast shadows on the walls and reveal their individual stories. Each piece is delightful and surprising, and displayed fittingly.

Masooma Syed’s dioramas takes one into a different world altogether. The three dimensional nature of the works allows them to be seen from various angles and experienced from several perspectives. Detailed and varied architecture is the first thing that is noticeable, both indoors and outdoors: from what seem to be mosques and minarets to collosseum-like amphitheaters, to worship rooms, to ordinary sitting areas, to performance and museum spaces, to warehouses- different kinds of spaces depicting different kinds of scenarios with different kinds of people.

However, the second thing that catches ones eye most intrigues the viewer – the material. This includes cardboard remains and boxes of various brands of intoxicants. Each piece is made from recycled, easily-available, cheap material, and for Syed, who has lived in India for a large part, the cardboard from alcohol bottles bearing various brand names was an easy find.

Nevertheless, what’s interesting is that narrative this material brings with it, whether consciously or unintentionally. The consumption of intoxicants is an implicit reality in Pakistan, as is religious conservatism- two polar opposites, yet those, which strangely overlap. This paradox is illustrated wonderfully as the branded alcohol boxes come together to create architectural spaces that remind one of places of religious significance. According to the artist, while the places she has created are not meant to be overtly religious but are present merely for their architectural beauty and characteristics, this contrast cannot be ignored, because it highlights the various layers, contradictions and contrasts present in our society.

The dioramas of both inhabited and abandoned spaces, whether individually or collectively, seem to be metaphors for life and the various stages and experiences it presents us with. Greys, with its run down walls, wall etchings and what appear to be cement bags, depicts either the lows of life or the ordinary days; a stage where toil and hard work has not yet shown fruit. A Japanese woman is seen making tea in a domestic atmosphere. The scene is bare and desolate. Dutch Quarter depicts South Asian men and women with their goats praying over (what seems to be) the body of Jesus lying inside a glass coffin. This piece has religious overtones (though ambiguous) and perhaps speaks of the human race’s search for spirituality and connection to a higher power.

Dear Love, depicting Hollywood in all its glory, takes us to a bygone era of post-war cinema and theatre particularly from the Western perspective. The happy faces of the entertainers remind one of the celebratory moments of life that can be abundant, yet fleeting. Centenary depicts older people visiting what seems to be a museum. Perhaps this speaks of a stage when we are older, and have the time and insight to look back at our lives with wisdom and introspection?

While Syed’s process of creation is spontaneous and she does not read too deeply into the connotations of every element she includes, she is well aware of what they are saying. Her concerns veer from the existential to the mundane, from various stages and facets of life (consumerism, religion, popular culture) to death. Perhaps it is these loaded questions and contradictions that create our experience of life itself, as is embodied by the title of the show and its various meanings: Are these ‘Spirits’ referring to just the alcoholic beverages, or our dispositions as human beings, or the very essence of life inside us: our souls? Syed leaves this for the viewer to uncode.