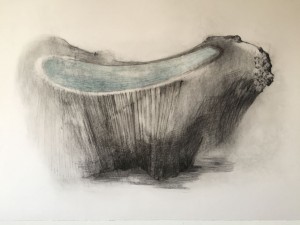 Markings – an interpretation of drawing

The practice of drawing and mandatory sketchbook updates for art students across universities around the globe seems to be less of an ‘educational’ aspect homogenizing curriculums but rather a tool to strategize engagement and reflection of linear qualities. Let’s not forget that the career of an art student is often –rather presumptuously and unnecessarily – deemed ominous if their drawing skills tend to falter below average. Perhaps because there is a general misconception that skill of drawing aspires to transfer reality onto a two dimensional surface. However, there are a multitude of artists who profess an understanding on how the linear can convey a plethora of conflicts and issues through the simplicity of mark making without digressing into formal rendering with pencils.

Such is the case with ‘Markings – contemporary drawing and questions of space’, curated by Maha Malik at Chawkandi Art. Featuring 12 artists, the exhibition asks the viewer to contemplate and vacillate between representational and the non representational, leading us to walk between the monochromatic and the intensity of colours and to then further cross the bridge between the static and organic. The exhibition speaks to the viewer on a one on one basis, as do spontaneous torn pages of a sketchbook with it’s’ edges and unframed appearance or rough scribbles on walls or tables. Maha Malik synopsizes the show for her viewers and readers by underlining how drawing can be used as a form of ‘spatial rendering’ because of its unapologetic simplicity and paradoxical uniformity in a multitude of visuals. Malik further illustrates that the 12 artists have contributed to the ‘kinetic ‘use of mark making, building upon the layers through which each piece in this exhibition compliments each other.

Waseem Ahmed, Khadim Ali and Imran Qureshi’s pieces may seem unusual choice for this show due to the use of colour and deterrence from straight line. However the three works utilize the essence and discipline of miniature as the basis for their interpretation of drawing. As Waseem Ahmed articulates that by the time a piece is complete, the fundamental drawing is hidden beneath, one can start to appreciate the hidden grids and patterns which cling on to the very basis of wasli for all miniature paintings. Khadim Ali similarly urges the viewer to ‘go beyond’ the studied demon figure present in his paintings and draws a parallel with his cherished sketchbook. The two may seem at polar opposites but the compositions, framework and layout draw upon the artists’ sketches.
Ali Kazim introduces the viewers to his sensibility of a sculptor perceiving the act of drawings; Kazim’s two pieces feature from a previous body of work prepared in 2011 which drew upon connotations of the human anatomy. These drawings of conte pencil on Japanese tissue could either seem to be a zoom in of cracking dry skin or a very defined isolated view of hair fallen on a surface. Speaking of surfaces, Aisha Khalid draws on the memories of the Sindhi home she grew up in as an immediate reminder of the patterns and geometry she associates with drawings. Her tulip diptych aptly titled ‘Doing as Others Told me, I was Blind. Coming When Others Called Me, I was Lost,’ encapsulates the difference between controlled calculated motions and blind free movement on paper. It is interesting to see the infamous flower which she is known for painting deconstructed and compared even in it’s most simplistic form.

Afshar Malik comments on the act of not seeing as his work with wire requires the utilization of both his hands which are tangential to drawing for him – ‘like playing a musical instrument, the habit of loose crochet’ are examples given to highlight this comparison. ‘House of Our Boxes’ appears to be in the form of an X-Ray of various boxes opened up and flattened for us to examine, these inanimate objects are given a metaphorical sense of being even in monochrome. Whereas R.M. Naeem and Anwar Saeed use representational forms of the body to profess their reflection of drawings – these studies definitely remind one of the continuous studies of the human physique and ‘life drawings’. We can sufficiently compare Malik, Naeem and Saeed’s differential treatment of the human body through the act of mark making as it highlights how varied reality is and how subjective an artists’ notion of fundamental drawing is.

Naiza Khan’s ‘Objects from the Deep 1’ blur out map details and emphasize like Afshar Malik’s work, the process of ‘image making’. In an attempt to explore the spatial restrictions and environments of cities and lesser dense habitat such as Manora Island, Khan’s artwork engages with the absorption of form and material. The details of the sites in her piece are overwhelmed by the foggy graphite and screen print making it elusive for the viewer to decipher the nitty gritty details. This can be compared with Meher Afroz’s work which builds upon layer after layer pouring less emphasis on the words but more between the points of the graphite onto the paper’s surface. Her horizontal and vertical vibrations of lines could symbolize how the meanings behind texts are often fallen on deaf ears or the language utilized in texts is never truly understood by the reader.

The final two artists for the show, Muhammad Ali Talpur and Muhammad Zeeshan employ their own unique techniques which they are identified by. With his meticulous straight lines, Talpur speaks about the unraveling of a kite string and the imitation of this act in his work. Zeeshan on the other hands pays homage to the technique of laser cutting and how the machine and tools come into their own yet the artist has to exert such control over these utensils.

It is fair to say that the exhibition is a visual exploration but perhaps it should also be added that the catalogue for the show contains specific and exploratory information put together by Maha Malik for this show which helps the viewers absorb and understand the different directions for Markings.