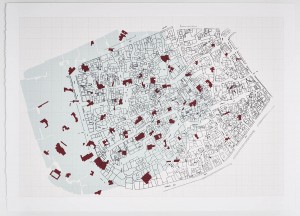 Maps not only define the topographic composition of a land, they accompany with them, abstract traits as well. Socially, culturally, and politically demarcated boundaries are an intangible element of maps that seemingly do not exist, yet they hold great significance. These defined “man-made” precincts represent the territorial ideologies man has created on a single sheet of paper for centuries. While to some individuals superficially observing a map it merely appears to be a physical depiction of land and sea on a two dimensional surface, others may perceive the social, cultural, ideological, or historical implications of it. Time and again artists have used the imagery of a map to express such notions, which has resulted in a plethora of artwork being produced around it.

“How we mark the land” explores how some of the most comprehensive and contemporary artists of Pakistan have tackled this issue. Curated by Aziz Sohail, the exhibition aims to present to the viewer a deconstruction and re-imagination of the imagery and ideology of maps, territories and home in the form of each artist’s visual vocabulary. Comprising of a mix of drawings, prints, mix media and photography, the show displays the works of Roohi Ahmed, David Alesworth, Shakila Haider, Zarina Hashmi, Naiza Khan, Fazal Rizvi, Shahana Rajani & Zahra Malkani in collaboration with Abeera Kamran.

This collective work of veteran artists along with up and coming emerging talent provides the audience with a versatile and multi-faceted viewing experience at the Gandhara-Art space. Works compiled from collections such as those of Naiza Khan, Zarina Hashmi, David Alesworth and Roohi Ahmed fit seemingly well into the narrative Aziz Sohail envisioned. Each artist has uniquely dealt with the idea of home, landscape, boundaries and their identity within that space.

Past works of prominent artists have been re-conceptualized to explore further possibilities they may present and explicate new concepts to viewers, such as David Alesworths The Chinese Periodic Baloch 1926 (2013), an antique Baloch kilim intervened upon with multi-coloured embroidery denoting elements of the Periodic Table in Chinese. Scrutinizing the inconspicuous establishment of Chinese dominance over the land of Balochistan, Alesworths visual mapping of both cultures via textile intervention is abstracted by the image of his work being projected onto the ground, adding an extra dimension.

Similarly, digital prints of Naiza Khans previous works generated further discourse with viewers on identity and belonging. Amongst her works, Khans more recent screen prints titled Re-aligned I &II (2016) are visually striking. The artist communicates the idea of shifting boundaries by superimposing elements of an aerial city map in a diverse manner. The viewer is pulled into the work immediately by the multitude of concise red forms, indicating structures, sprayed across the map which seem dislodged from their point of origin. They appear layered over a cool toned silhouette, presenting itself as a “gray area” of sorts, almost casting a shadow. Underneath, the base linear and skeletal structure of an urban space can be observed. Concrete Folly I and A Moving Landscape (2016) adopt the same visual language, comprising of undefined red markings overlaying landscape images, where Khan expresses how urban structures interfere with these landscapes. 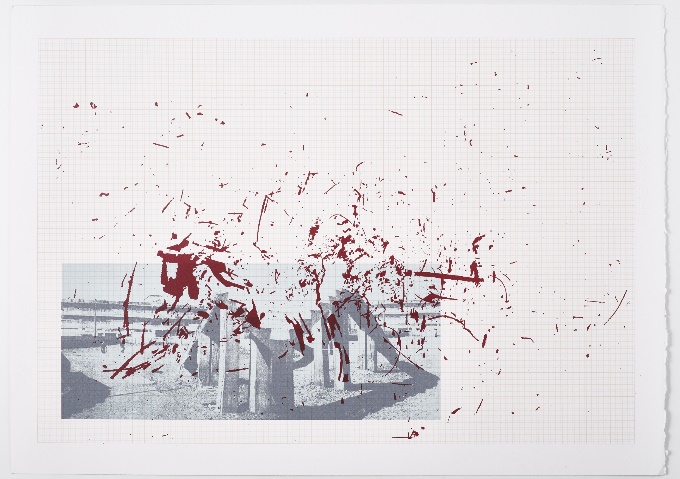 A selection of seven woodcut prints by Zarina Hashmi from her original series Home is a Foreign Place (1999) explores ideas of home, language and nationality. Hashmi questions the validity of home and how it transcends boundaries, advocating her native language over her native land as her true identity, with strong lineal elements characterizing her minimal, monochromatic prints. The Partition had a great influence on the artist, who expresses home to be a negotiable idea not bound by peripheries.

Roohi Ahmeds Karachi Series (2016) navigates the viewer across the various travel networks of Karachi by mapping her daily commute from home to work. Ahmed’s most outstanding piece, In the Limelight (2016), delivers a strong message through minimal technique. The simple arrangement of needles on a plain white surface encapsulates a negative space forming the boundaries of Pakistan. The ominous needles appear to assume both a hostile and defensive position, almost as if targeting and threatening the terrain while identifying it as a threat as well, an apt reflection of the nation’s current state of affairs.

Fazl Rizvi offers a series of drawings and writings that expound upon the idea of impressions being left upon a land. True to his style of incorporating abstract narratives within his work, Rizvi illustrates how external actions imprint upon the land, striking an imbalance within the system. His typewriter drawing series uses paper as a metaphor for land, and the markings on it a reflection of the impacts on the land.

In More than good intentions (2016), Shakila Haider overlays a map with an intricate pattern, kaptomar, indigenous to Hazara, symbolizing hope in a conflicted region. The elaborate design interlaced in the imagery creates a harmonious visual journey for the viewer. Adding to the diversity of the exhibit were a collaborative photographic series of archival prints by Shahana Rajani and Zahra Malkani titled Moon-Water-Earth-Plant (2016). The series of photographs capture local vegetative growth as the focal subject, perceiving it as a representation of the lands identity. Rajani and Malkani further collaborate with Abeera Kamran to create a web installation titled Of Struggle (2016), a research based project about the mountainous terrain of Pahwaro Jabal in Gadap, Karachi. This effort was organized in collaboration with the Karachi Indigenous Rights Alliance in hopes of raising awareness on the plights faced by the locals in terms of development, climate and infrastructure. This video based project is an admiral undertaking by the artists as it aims to place the concerns of land in a broader societal context and reach out to audiences in a creative manner. The work can be experienced online at www.ofstruggle.com.

How we mark the land continues till December 9th at the Gandhara-art Space.