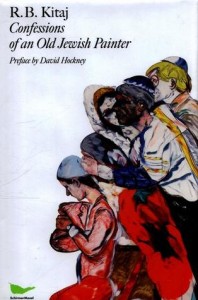 I came to know about this book, while reading an article on Philip Roth in The New York Times where he mentions R. B. Kitaj’s Confessions of an Old Jewish Painter. The autobiography, which was published in 2017, contains the account of a life that was lived in an unusual manner and ended on a shocking note- the painter committing suicide on 21 October 2007, eight days short of his 75th Birthday.

Perhaps mentioning his death is not an appropriate course to review his book. It is not dissimilar to those movies in which the hero is killed in the opening scene- and the rest of his life unfolds in varying and unexpected phases. Likewise, when we read 35 chapters, from his ‘Childhood in Cleveland’ to ‘Kitaj in The Aura of Cezanne’ and in-between his studies at the Royal College of Art, Hollywood, The Six-Day-War, Paris, his wife Sandra, London, Jerusalem, and various other episodes of his life, we recognize the master, who had a complete command in creating his self-portrait – not in paint, but in words this time.

For an artist, revered for his painterly quality, fertile imagination, control on line, and complexity of composition, Kitaj demonstrates an equal grip and grasp on words. He weaves narratives, which not only describe separate stages of his life but enchant a reader because of the simplicity of expression and intricacy of details. He reconstructs his life bit by bit, as a painter puts the final strokes to complete his image, but one suspects that like an artist who makes a painting but is surprized to see his final work, for Kitaj the text of his autobiography would have been unexpected or strange, since he writes: “I believe, with Harold Bloom, that the best art is strange”. Much like most of readers who are familiar with his paintings, but not aware of his personality or past.

The autobiography provides a background to ‘read’ his paintings, which in their construction are literary, since the painter consciously sought to create works which are rooted in the Jewishness or dealing with Jewish themes, personalities, and history. On several pages, Kitaj mentions the importance of being a Jew. “When I first realized that the Jewish Question was becoming a dramatic force in my art and maybe even a force of destiny, I determined (in the late sixties?) to go back to the beginning, to the Bible, to Torah, Talmud, and the Prophets; to the great Commentaries, etc.”.

Reading his text one becomes conscious of Philip Roth’s admiration for the Confessions of….. because the American author also writes about Jewishness in his novels, often disturbing his family and annoying his Jewish tribe, due to the openness, frankness and freakiness of his characters. Most of the time obsessed with women and sex. In the epilogue of the book, Eckhart J. Gillen writes about this link: “Not least it was Philip Roth who fortified Kitaj in his conviction that the London critics and English society had been anti-Semitic. Both belonged to the same generation…… four years before his suicide Kitaj writes in his diary [Roth is a good listener and he and I talked often on the phone when Sandra died. Then a lot of my stuff would appear in his novels].”

The common fascination for women can be witnessed in the fiction of Roth and paintings of Kitaj, but his autobiography also reveals his obsessions. There are many females in the pages, but his wife Sandra Fisher (since 1983) dominates his life. A life that was like every painter’s, spent in loneliness and desolation, even though he was surrounded by friends. One of his earliest friends – before success – was David Hockney, a fellow student of Kitaj at the Royal College of Art. His lifelong friend Hockney wrote the Preface reminiscing their time spent at the Royal College of Art: “He was much more sophisticated and I saw he drew very well. He could draw and he bought my drawings for five Pounds. That was a lot of money, I could live for a week on five Pounds. He had the first skeletons I did. We had two things in common: we liked to draw and we liked to read. Literature and drawing. I remember we talked about books, Kafka.”

Perhaps that interest in books and Kafka was the moving force that made the art of R. B. Kitaj unique in terms of complexities of references and literary/historical connections. The same happened in his writing too, because the text is embodied with clarity of thought. Even though he writes about his life, but he shares ideas of his times, including marginalization, art criticism, Jewishness, and the structure of art world. In the book, “Kitaj identifies his memoirs programmatically as Confessions in allusion to the Confessions of church Father Aurelius Augustinus (354-430), who used this title for an autobiography for the first time”.

The book by R. B. Kitaj is a means to enter into the mind of a painter, who is not just a maker of images, but a creator of them, he fabricates a world in his works that can be understood when we read his autobiography, which not necessarily serves as a code, but as a confession!