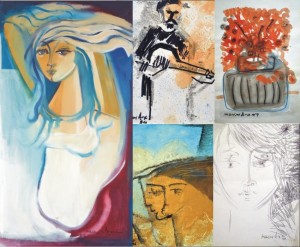 February 13, 2014 saw the opening of the ‘Mansur Aye – A Retrospective of Five Decades’ exhibition at Islamabad’s Gallery6. Those familiar with Aye will immediately call to recollection his penchant for the ‘Moon-faced Girl;’ a mystery muse who marks the majority of his works. The Retrospective – curated by gallery owner Arjumand Faisel – showcases 50 of the artist’s works, including previously unseen still lifes and a series of paintings featuring male musicians.

Those who are unfamiliar with Aye’s work are in for a treat if they can make the exhibition, which stays open until February 24. The immediate effect of being surrounded by this little-known Master’s work is one of tranquility. Easy and effortless lines grace the canvases, with vibrant colors that highlight without clashing. Everything about his work has a sense of softness to it, perhaps reminiscent of the man himself. From all accounts Mansur Aye was a quietly-spoken, gentle soul; completely dependable and polite. “Unlike other artists, he never marketed himself and was not social. Perhaps that is the reason why his work did not get [the] due exposure and recognition it deserves,” says Faisel.

Aye was born in 1941 in Delhi, but lived most of his life in Karachi where he worked and where he passed away in 2008 at age 67. “Although he was well known in Karachi, people don’t really know about him elsewhere, so the [Retrospective] also aims to familiarise the art lovers of [the] twin cities with his work,” Faisel comments. “It is good work which has not been displayed before,” he adds.

A self-taught artist Aye eschews any association with a school or style. Still, his works are reminiscent of the early Cubists and Expressionists like Kirschner, and there are even echoes of the Monsignor of Cubism Picasso in Aye’s renderings of his Moon-faced muse. The fragmented faces are what bring about this association, with minimal outlining and spontaneity of brushstroke; however Aye’s work displays none of the tension and angst so often present in pure Cubist form, which again could come back to the gentle nature of the man himself. His pencil sketches are more aligned with Cubist style than his paintings, but it is in his paintings where Aye’s work really comes alive because color was Aye’s strong suit. He understood how to bring movement and vibrancy in an effortless style, with an innate ability to convey vitality to a canvas without losing a sense of calm in the work. Warm sepias and palettes of blue were regular color schemes for the artist, who liked to work with a variety of media, from oil on canvas to watercolor, pencil drawing and even chemical etchings.

Aye was first exhibited at the Arts Council in Karachi in 1962 with fellow artist and close friend Jamil Naqsh, and the following year was awarded third prize for his painting entered into the National Art Exhibition in Rawalpindi. A relatively unknown side of Aye’s career is his interest in animation and cartoon drawing, which he devoted a lot of time to in the early 70s. He remained active as an artist right up until ill health made it impossible. He enjoyed experimentation, and was known to try his hand at print making, even making his own paper in his washing machine! He made baked clay faces to print on paper and was eager to explore all avenues when it came to his art. He did however, always come back to his Moon-faced muse, despite having dalliances with other subjects matter, like the musician series on exhibit at the Retrospective, and some energetic still life images. In an anecdote about his famous muse, it is said he called a friend to simple say “She’s back” when he once again started painter her after a short hiatus. It is unknown whether the Moon-faced girl is a rendering of someone Aye knew, or if she was a figment of his own imaginings.

Aside from his work in visual arts, Ayes was attracted to the power of documentary films for recording history as it happens, and planned to make documentaries about the prominent artists of his time. Unfortunately for this generation, Aye never secured the sponsorship to complete his documentaries, and so many of those artists are now long forgotten. But not Aye himself. Thanks to a powerful body of work and to Gallery owners like Arjumand Faisel, the memory of Mansur Aye lives on.

Cosima Brand is an editor and writer living in Pakistan