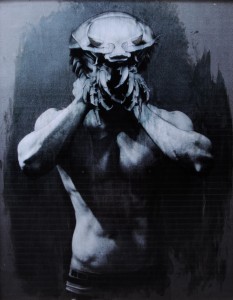 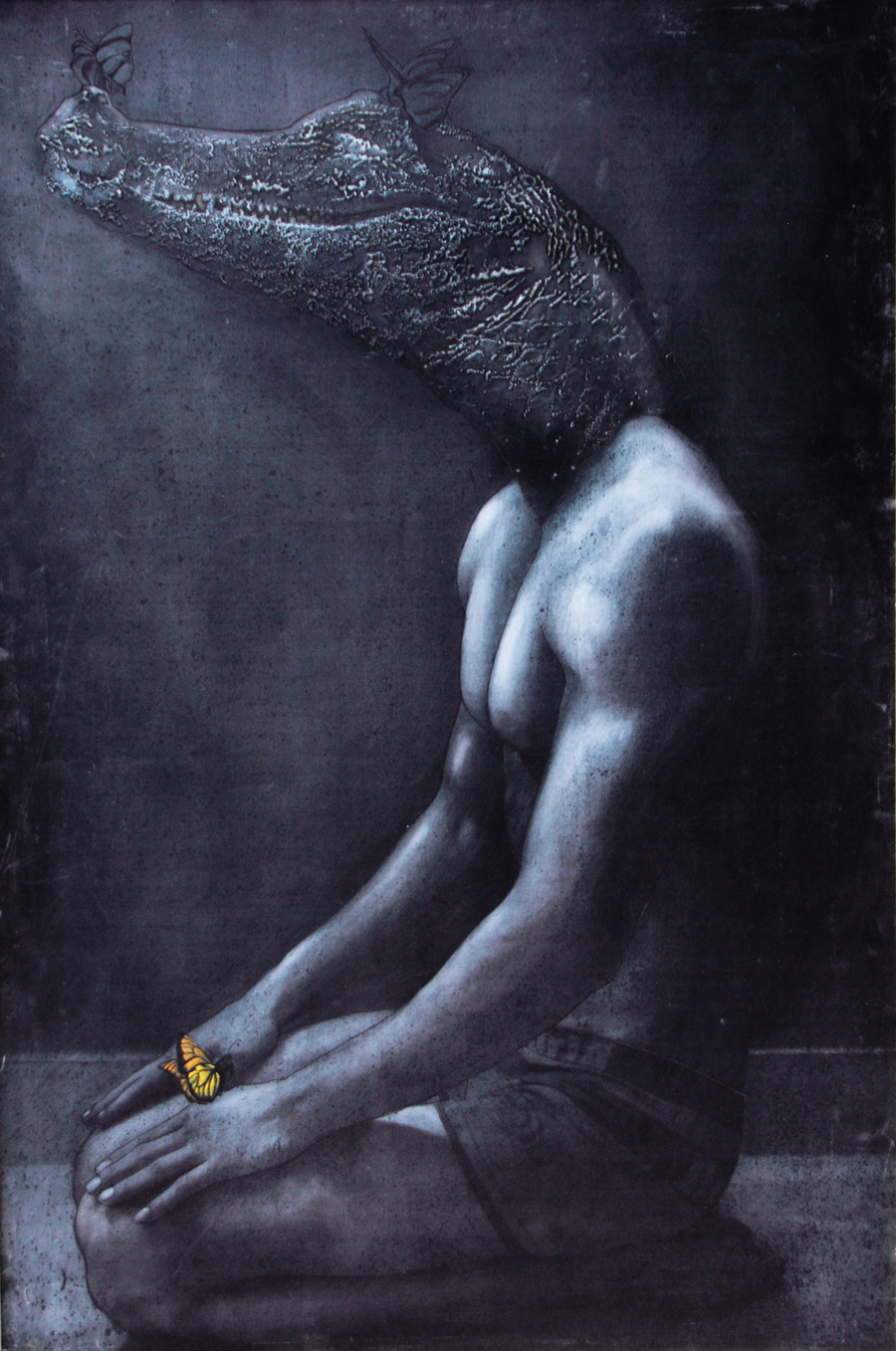 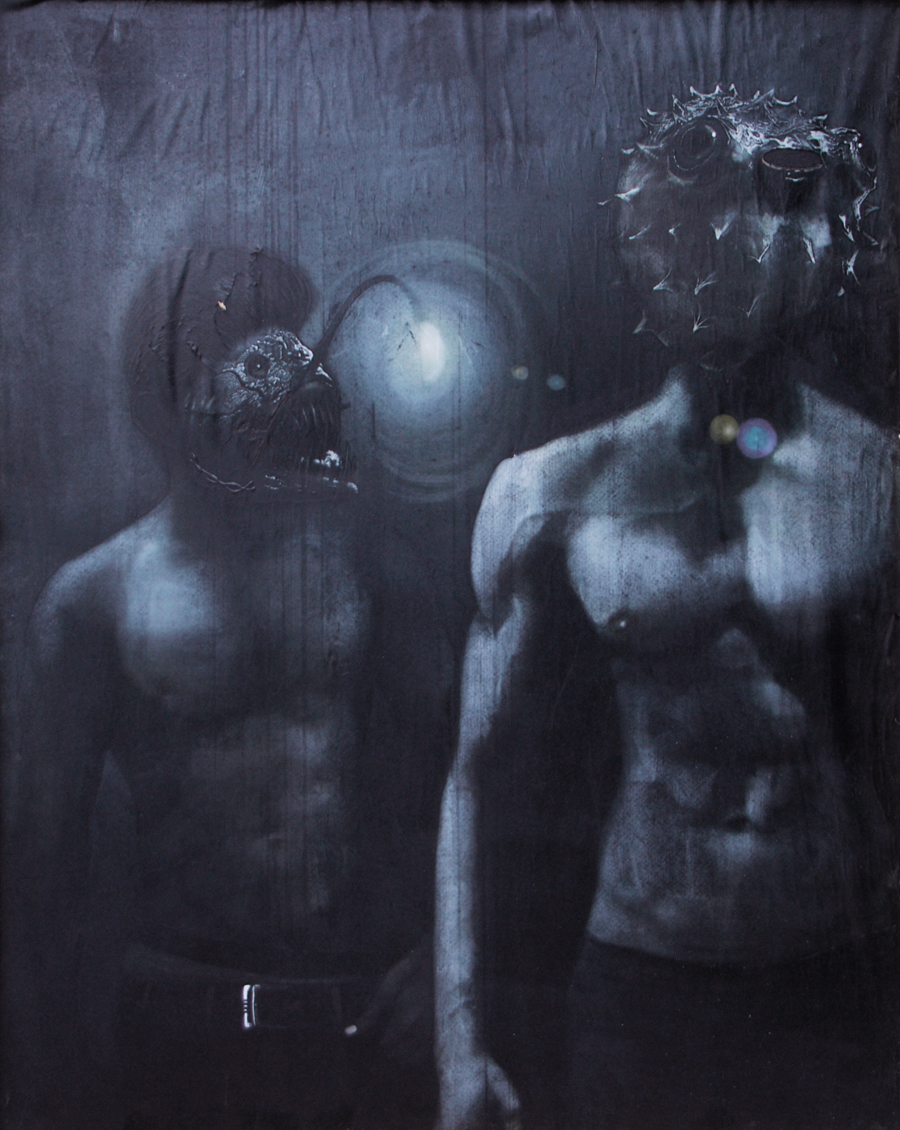 Man or Beast: Metamorphosis of Instinct and Image

Bestial” by Hassnain Awais at the Taseer Art Gallery is an exhibition of mixed media callographs that features opposites at every level, starting from the handling of the surface that includes the technique and its palette, the images it portrays, to its titles laden with meaningful insinuations. The eternal tussle between the negative-positive forces starts with the vast expanse of achromatic humanoid male figures with heads or tails of large aquatic animals, sometimes offering the eyes a pleasant relief in small area of bright colors depicting delicate objects. The contrast between the sensitively rendered muscular torsos of attractive male bodies and the equally masterful renditions of ferocious underwater animals augment each other from the power perspective but at the same time the metaphor of brutal animals betray the man’s skin deep dark inner self. This abyss is compared to the unfathomable depths of the oceans and the primary rule that reigns there: “Big fish eat little fish”. The Megalomaniac infers that this is exactly what is practiced in the competitive corporate world – the smooth silky red necktie flaunts the financial status of the wearer, the suspenders his age and experience and the multiple shark heads arrogantly signify his tactics of survival.

Another contradictory theme Awais’s artworks present is the portrayal of the male body defying and reversing the usual “male gaze” approach as the masculine figures are displayed here as objects of desire and sexuality. Moving one step further in his provocative approach, Awais also forges a connection between the masculine and the brutal on the one hand and in a very subtle way, with feelings of sensitivity, sympathy and compassion with the female. His Swindled Stratagem(deceptive scheme) where the nonchalant gaze of the man is completely detached from the tight grip of one of his lower-body octopus tentacle holding a goldfish in a deathly grip. This image is a strong statement on the contrasts in human behaviors and characters where looks are deceptive and the consequences fatal for the victim. Patient Predator is another frame carrying similar undertones where an alligator-headed male sits in a meditative pose calmly awaiting his prey. The strong contrasts between the delicate butterfly and the robust male body with its sly mask and the imminent danger to the innocent from the malicious tugs at the viewer’s heart, awakening the instinct to reach out and save another life from danger.

His artworks whisper loudly to the spectators and encourage them to engage with them on a variety of visual and metaphorical levels. Pretentious Rendezvous, therefore, is a silent and soul-searching engagement of a man and reptile. Eyes locked in gaze, both sit at ease assessing each other and holding back from pouncing, aware of the other’s malevolent potential. Encrypted here are lessons for endurance in a ruthless world where survival is only for the fittest.

Awais’s large-scale artworks using the printmaking technique of collagraphy offer an insight into the dystopia we inhabit. Flooded with social dogmas, taboos, plagued by politics of gender, space and time, life appears to have lost all semblances to peace and tranquility. Gleaming behind his dark and dull color schemes are sentiments of yearning and hope for the bright and beautiful side of human nature – the benevolent and the caring. This search has taken him deep into the abysmal depths of the oceans where life from times immemorial has continued on simple and predictable survival notions. Life on earth on the other hand has mastered complex destructive techniques defying all rules of nature. Awais’s humanoid figures at one level are palpable, emanating sexuality, desire inviting close proximity but at the same time are devious and treacherous as they appear to contemplate instincts reserved for cold-blooded reptiles.

These images are a vivid reminder of similar paradoxical characters we encounter everyday who emanate human values but ruthlessly crush, crumble or devour anyone they think is in their way. But more importantly, these collagraphs are like a mirror Awais holds for such characters reflecting an image in each frame that only they can decipher and identify with. He seems to offer them a chance to “stand and stare” at their inner self-whispering pleas to let their human self take over again!

One Response to Man or Beast: Metamorphosis of Instinct and Image