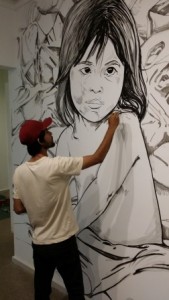 For any audience, what’s more exciting than being exposed to productions of talent?

It’s the opportunity to spectate the talent coming into play.

Such was the appeal of S.M. Raza’s show at Canvas. The artists solo exhibit featured mostly murals that he painted on the walls of the gallery space as art enthusiasts dropped by to watch the artist in action – the completed works displayed on the 14th of June.The artist’s flair for illustration found itself on the walls of the gallery. To be able to draw on such a large scale with people spectating is a feat on it’s own. It’s obvious that S.M. Raza is incredibly gifted and is one to be commended for his unwavering skill.

Raza’s work featured poverty stricken children, all of which share a tendency that we all can even relate to; to dream. A famous quote from Hamlet, one of Shakespeare’s renowned plays, comes to mind-“To die, to sleep – to sleep, perchance to dream – ay, there’s the rub, for in this sleep of death what dreams may come…”

As Russel A.Smith says in his statement about Raza’s work, the artist’s aim is not to disturb the viewer or invoke some form of empathy. But rather, to highlight the manner in which creativity and poverty correlate with one another. This notion could be placed in any context; the opium for any person finding himself in troubled times is to hope and to dream of what can be. I feel that Raza accomplishes this successfully through his work, his illustrative murals detaching the audience from feeling the intense reality of the children’s plight and rather, focusing on their yearning. What one also notices next to each mural is a thumbnail of its reference photo. The artist purposely chose to include these images in his exhibit so as to further emphasize the notion of ‘what is’ with ‘what one wishes it could be’. Although, personally, I feel as though this particular aspect was redundant as the work spoke for itself, I must commend Raza for being daring enough to include the reference photos and allowing his skill to be subjected to public scrutiny – which he made obvious that he lacks none of.

The most powerful of his work is that of a young adult sleeping on a pavement that is held up by clouds. The child sleeps, stoic (an aura that all his subjects exhibit), looking almost comfortable in his seemingly uncomfortable setting. He wears shoes that look a size or two too big on him, but an aspect only noticeable if you look more closely. These subtle indicators of a poverty-ridden child, presented ever so bluntly, yet with utmost dignity and unapologetically dreaming of transcendence, is what makes the work incredibly moving.

Another work featured a girl drawing on a blank page, the linear butterflies flying off the page and into the immediate space – as the girl watches them with her big, unsurprised eyes. Interestingly, as the boy literally dreams while sleeping on a pavement, another uses art to daydream – fantasize about one day being able to rise from her predicament. This piece has a melancholy undertone that lays dormant in its whimsical appeal. The choice of using a girl as the subject makes this piece even more poignant for it could also be highlighting the limitations that women face when it comes to their aspirations regarding careers and independence, even being denied a right to an education.

Another mural featured a child sitting on a wooden plank, unapologetically feasting on a watermelon, him surrounded by multiple more, perhaps an abundance just waiting to be feasted upon by him. It’s rather obvious what the plight of this child is and how there are so many children like him who yearn for something as basic as food; having limited to no access to it.

Although not his intention, S.M. Raza points out the reality of their economic background and how it has denied them their basic rights – of security, protection, shelter, education, and nourishment. Raza’s murals would have been more poignant and relatable had they not been restricted to a gallery space where his audience was limited. Even so, it was a refreshing body of work that was thoroughly enjoyed by all those who did have the privilege of viewing it.

Keeping his voice detached and free from much emotion and sympathy, S.M. Raza makes the hopes and aspirations of his subjects emerge within the air of the gallery space, leaving the hopes open-ended; just like all hopes and dreams are – waiting to happen.

One Response to Lucid Dreams