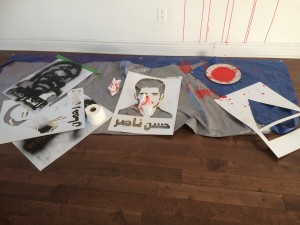 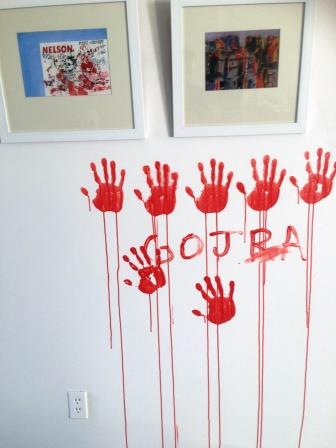 Love in the times of Mufti Naeem

‘Love in the times of Mufti Naeem’ is Shaan Taseer’s inaugural exhibition in Canada held at the Promenade Gallery in Toronto from May 14-30, 2016. Twenty four new works in water colour and mixed media were cleverly created and exhibited amongst spray painted graffiti and template portraits of recently killed leaders, activists and journalists of Pakistan to create an environment of civic protest and extension of the on-going resistance movement. Shahbaz Bhatti, Sabeen Mahmud, Murtaza Jaffari, Rashid Rehman, Perveen Rehman, and of course, his own slain father Salman Taseer. These were the brave souls who’s voice of reason were systematically eradicated by a nasty wave of religious extremism and intolerance, or fell victims of state terrorism.

“Through my art, I am telling the story of a society that is being Talibanized slowly yet is fighting back bravely,” says Shaan Taseer. “I let the city tell this story.” Taseer’s metaphoric paintings of cities without inhabitants provide a strong back-drop to the current cultural wars in Pakistan, as he takes on religious extremism and intolerance promoted by the self-proclaimed and righteous religious leaders. This madness is just not limited to Pakistan as recent events in Bangladesh, India and Myanmar show alarming signs of growing intolerance in secular societies.

While we know where Taseer’s mind’s at, his heart is definitely where art is. His hand is particularly adept to fine art, water colouring technique, detailing and portraiture making. Well executed portraits of Nelson Mandela, Malala Yousuzai and Pervaiz Rahi demonstrated his ease with the medium and a gift, evident in him as a self-taught artist.

Taseer’s exhibition raises some important questions for us to ponder on and take action. Why can’t we not tolerate religious differences in our societies? Who is promoting this intolerance and why? Who should be responsible to stop this madness? Is it the role of the state, or religious and civic bodies, or the society at large?

One could argue that if members of civic society become bystanders to injustice, they actually become part of the crime committed. Great cultures and civilizations are created on pillars that respect and value ethnic and religious diversity. Taseer said “I do not like using the word minorities and for some reason it continues to be used in South Asia. Meanwhile in Canada, I have noticed the frequent use of the word diversity to celebrate pluralism and the contributions of all its citizens.” He raised the awareness of the current stand-off at Mandi Bahuddin and the recent killings of Christians on Easter in Lahore and the burning of entire Gojra village on blasphemy claims.

Taseer’s exhibition is a brave attempt at re-claiming the civil rights of Pakistanis and achieving much needed pluralism and moderation in Pakistan. It received critical acclaim and recognition amongst progressive Pakistani Canadians and native Canadians as the message of pluralism resonated strongly with them.

Ali Adil Khan is a writer, curator and collector of art, and the founder and director of South Asian Gallery of Art in Toronto. He actively promotes South Asian art, music and culture in Canada.