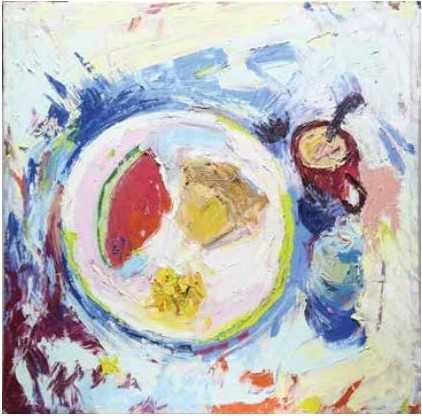 Fiction is defined by the idea of non-reality, where the author creates a make-believe world bearing little or no connection to our own real

Think Like an Artist: And Lead a More Creative, Productive Life
The everlasting impermanence
Red on the Spectrum

Fiction is defined by the idea of non-reality, where the author creates a make-believe world bearing little or no connection to our own reality. For most of us fiction is a tool for escape when truth becomes even stranger than myths. In a recent show at Studio Seven, curator Rabia Ali brings together four artists who’s bizarre imagery draw the viewer in, yet instead of an escape what we get is a harsh reality check.

As the title suggests, “Loompaland” (the fictional land conceived by author Roald Dahl in his children’s story “Charlie and the Chocolate Factory”) creates a phantasmagoric world of eccentricity and wit which ironically hides beneath it harsh truths. Walking into the gallery is a sensory delight, with works that have the outlandish visuals of fantasies and fables. This trope of make-believe is perhaps played for irony, as the works seem to use their fantastical imagery to hold a mirror up to society, commenting on, and challenging facts that we assume to be concrete unchangeable realities.

Safwan Sabzwari’s work dominates the exhibit in its volume and size. The illustrative style mixed with the looseness of the paint creates a raw visual. The work has an unrefined, unfinished quality and is yet saturated. The imagery that is at once grotesque yet captivating. Sabzwari examines and critiques society and culture as he observes it in his everyday encounters, challenging longstanding ideals and revealing the hypocrisy that lies within. Each work presents a cacophony of ideas with satire and wit yet there is a certain darkness to it. Religion, superficiality and conservatism are a few of the recurring themes in his work which he seeks to subvert.

Maryam Arslan’s small frames of thick delicious paint seem to be almost carved and sculpted. Instead of creating the impression of a 3D object, the paint becomes the object, used to create the textures of various food items. This overabundance of delicious treats along with the title “Food and Other Demons” seems to talk of over-indulgence, excessiveness, glut and waste, especially with the way the paint has been treated, piled on and spilling out onto the frame. The bright colors and zoomed in images of sumptuous food seems to be appealing to the viewer’s senses, attempting reveal our own greed.

Sophia Balagamwala’s work uses childlike imagery with bright innocent colors to talk about political themes and the distortion of facts. This is most evident in her installation “Very Important Announcement”, where tiny T.V screens are stuck inside fluffed up shapes made out of fiber glass. These are speeches from fictitious political candidates which become confusing and inaudible as they compete with each other to be heard. The little TV sets seem almost like toys, feeding the public fantasies. The shape is also reminiscent of sheep, which might as well be a metaphor for the naivety and gullibility of the public.

Anum Lasharie’s work is visually removed from the rest, attempting a more realistic depiction, rather than a fantastical one. Her work is about society as a tool for suppression and restriction, and how humans are meant to be free yet constraints are almost inevitable. The work depicts the frustrations of a trapped mind, especially the piece “Waiting and Wanting” where a woman sits in a room next to a window with a view of the open sky, which is reflected across her own body, perhaps revealing her inner yearning for freedom.

While the works employ absurdity as its medium, what it speaks about is more truthful than reality itself. In a way then, the show tells us that it is our “real” world that is the made-up lie we have been made to believe since childhood to keep us in check. The work can easily be considered nonsensical doodling of a peculiar mind, but if they depict reality beneath the surface, perhaps it is the world that is crazy.