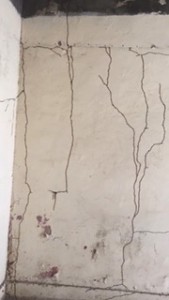 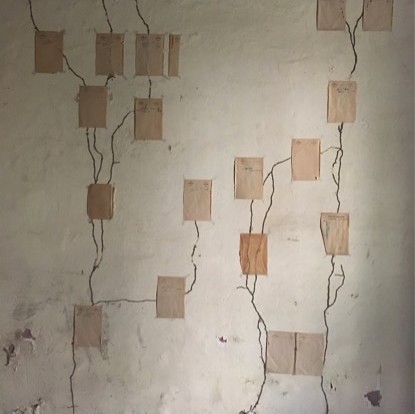 ‘Of Other Spaces’ was a group show by a collective of 12 artists at the site of an uninhabitable house and entailed the exploration of a space that is purposed and repurposed, through a variety of media and techniques, inspired largely by a lecture delivered by French philosopher Michael Foucault, titled ‘Of Other Spaces’.

Me, says the robin, my song in October

Will tell the still gardens the leaves are over.

Thus ends Hughes Elegy for the Leaves, his depiction of nature and natural processes as a requiem for people and places in transition, and whereby the poetry itself is meant to become the agent of healing. Nisha Hasan’s has taken the cue and the title from Hughes for her installation in the 1940s house, constructed in the wake of Independence at 8-F in Gulberg, Lahore. With a play on his words, she composed an installation consisting of numerous ‘leaves’ or pages from the 1961 diary of Mian Lateefur Rahman. Nisha accidentally chanced upon this diary while browsing through the piles of old books & early editions in Purani Anarkali, as she contemplated an installation harking back to familial pasts.

When invited to participate in the show ‘Of Other Spaces’ (Lahore, October 19-25), Nisha explains that the first time she entered the space she was struck by what was seemingly the only sign of ‘life’ in this no longer habitable old house – the vein-like lines of termites on the walls of what would have been the butler’s room in the house at 8-F. These formed a pattern that appeared no different than the blood carrying vessels of the human body.

Her installation of single leaves of paper over the veins over a period of almost 6 weeks meant that the termites in places burrowed through and over these pages and continued along their old familiar paths. That Nisha chose to strip pages from this dairy not only transformed their previous form but in the way she installed them, in fact reconstructed their history and brought them alive as pulsating veins. The echoes of past lives were now reverberating in this room, as it became a site of material memory.

Sana also uses an existing feature of the large gol kamra at 8-F as a cabinet of preserved articles, or fragments of memory. Her forms are recognisable as articles of daily use, like a pair of reading glasses and a lock or a book, wrapped in a spider’s web, which may be viewed as mummification for the sake of preservation. These together with her hyper-realistically painted old pages, passports and envelops shows her desires to turn these into “lodged memories that will withstand the vagaries of time and the disappearance of actual site, place and body”, in the words of Rakhee Balaram.

Both Nisha and Sana show an acute concern for architectural memory and the fast-changing face of Lahore, their city. However since very little information of the house, its history, owners and occupants was available it did not provide the essence of a ‘home’ in the way Gaston Bachelard might have analysed space: the psychic space of a room or a house and its hidden dimensions. Notwithstanding, both artists’ sensitivity to loss, memory and nostalgia are ever present in their oeuvre as they draw the viewers’ subjective consciousness to focus on the present while eliminating transient time. While Nisha’s installation takes the viewer to re-live a golden era in Pakistan’s history Sana seems to be providing us plans and designs not for a new building in the future, but for not living. In a manner seemingly akin to Rachel Whiteread’s Ghost and House – an impression of some thing which will soon not exist; in the words of Digby Warde-Aldam “a physical manifestation of imposed absence” but unlike Turner prize winner Whiteread’s House, which ended up being a temporary imprint for merely 90 days as per Council consent, Sana’s mark making, also impermanent, may end up with a longer life.

Nisha Hasan and Sana Saeed were both part of a group show ‘Of Other Spaces’ held in Lahore 19-26 October, 2017 by the Creative Process and in partnership with Jadeed.