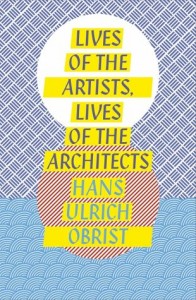 One of the leading curators of our time has a way with titling his books. His books, that can be taken collectively as a big, warm heart-to-heart with contemporary art, nod also – as far as titles go, and inspirations – to certain other influential texts on art and its history. Berger’s Ways of Seeing was implicit in the neatly titled and sincerely written Ways of Curating (2014). And, now, with Lives of the Artists and Architects, Hans Ulrich Obrist tips his hat to Giorgio Vasari, the grandfather, so to speak, of art history. Published in 1550, Vasari’s Lives of the Most Excellent Painters, Sculptors, and Architects, from Cimabue to Our Times, (commonly, and thankfully, simply referred to as Lives) looks at many of the great minds that led and contributed to the Italian Renaissance. Vasari is eulogistic in his descriptions of these lives, so much so that he well nigh apotheosises them. And his text, though invaluable in the biographical information it provides from almost five centuries ago, is verbose and a little pompous.

Obrist’s Lives could not be more different. The similarities end at the titles and the combined reviewing of artists and architects, an idea which Obrist attributes to Vasari, who did not ‘differentiate’ between them. Obrist writes, in the Introduction: ‘We have brought together art and architecture…because keeping disciplines together is more urgent; often the connections between supposedly different areas are the most inspiring.’ The product of his conversations with eminent artists and architects from the twentieth century, Lives was first published in 2015, by Allen Lane (Penguin Books). Obrist has unequivocal faith in conversation as a fundamental means to understanding the creative process. Ways of Curating was interspersed with references to the importance of having conversations and recounted how many of Obrist’s ongoing conversations with artists came about. In Lives, these play out more fully in entire chapters dedicated to everything Obrist has ever discussed with a certain artist or architect over the years. ‘I have these conversations wherever they can happen,’ he writes, explaining that he uses the word ‘conversation’ instead of ‘interview’ because ‘once it starts it is infinite and doesn’t stop.’

Informal, meandering, honest, these dialogues are as telling as someone taking you through their photo albums. Glimpses into personal histories segue into admissions of current interests and obsessions (who knew Frank Gehry loved to sail, and David Hockney thinks that Twitter is the ‘totally new space’?), and both alight together on plans and concerns for the future. Each conversation is preceded by a small foreword by Obrist, revealing his first encounter with the artist or architect in question, tracing the trajectory of their interactions, and alluding to special, intimate incidents that bolstered communication between them. Obrist has known many of these personages since his teenage years and his earnestness in collecting their stories and experiences (he calls it ‘a protest against forgetting’) is a study in dogged determination. It is evident that Obrist does not consider any exchange between himself and an artist/architect unworthy of being recorded. The conversations, therefore, range from rambling discourses conducted in the leisure of an artist’s studio to fragments of interchanges taking place in high-speed vehicles, briefly but sufficiently touching upon a leitmotif from the interviewee’s practice or imagery.

Among the most engaging conversations, I felt, was Obrist’s dialogue with David Hockney. The two talk comfortably and at length about digital technology, 3D cinema, printed versus virtual newspapers, painting, painting people and their personalities, and Caravaggio doing centuries ago what artists do today on Photoshop. Hockney is wonderfully articulate and also has a somewhat oracular way of imparting information and opinion, which ties up with his persistent search for veracity in everything, in images and image-making, in people. The artist’s dalliance with technology and gizmos always leads back to his dogmatic belief in the truth of what he does – drawing and painting. ‘I’m painting people,’ he says, ‘and I do it without cameras, with just my two eyes to look at them. I think that’s how I get the volumes…It’s amazing: all you have to do is sit somebody down and they will always sit slightly differently.’ And then, in his quietly self-assured way, he adds, ‘I catch the person. I do catch them.’

Obrist’s chats with architect Frank Gehry and Iranian artist Monir Shahroudy Farmanfarmaian constitute two more memorable chapters of the book. With Gehry, Obrist chooses to talk about early life and inspirations, factors that helped shape the man and his architectural visions. The figure of Frank Gehry that emerges as a result is well-rounded and almost Hemingway-esque in his adventurousness. He is fond of ice hockey and sailing, the former of which he also uses as an analogy for architecture. He discusses with Obrist how imperative it is for a successful architect, a good architect, to be adaptable and to dream up buildings that, above all, serve the culture and people they are intended for. Obrist’s conversation with Farmanfarmaian, on the other hand, is an exciting contrast to this world of rough winds and ice and heat. Their dialogue takes you into enchanted interiors full of afternoon light, twittering and rustling with nightingales and flowers painted on wooden beams. The artist revisits her childhood in Tehran, her youth in New York in the bustling 1940s (where she was ‘this unusual girl from the Far East’ who would be invited to parties thrown by and for artists), her return to Tehran, and her subsequent travels all over the country that took her from traditional coffee-houses to old palaces to shrines in a whirl of geometry and mirrors.

Some of the other names interviewed or, rather, conversed with are Louise Bourgeois, Marina Abramovic, Zaha Hadid, Oscar Niemeyer, Gerhard Richter, and Rem Koolhaas. An unaffected and genuine inquisitiveness is, I suppose, the mark of a globally popular curator like Obrist. Since his adolescent years, the man has displayed a remarkable fearlessness in approaching celebrated artists and architects, extending a hand of friendship, and sitting down across from them to just listen. The impression his writings and curatorial endeavours leave of him is that of a modern-day Hermes, the wings on his sandals beating fast as he flits from place to place and person to person, leaving in his wake constellations of connections between cultures, philosophies, and their standard-bearers.