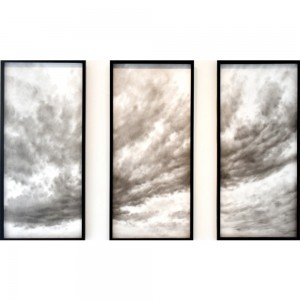 When the eye perceives an image, it sends it to the brain for interpretation where we make sense of what we are seeing. We ingest the image as a whole, taking in all details to better analyze a situation. However, in order to fully understand an image, the brain pulls up previous associations, whether factual or sentimental, in order to give us a more well-rounded understanding, and based on these previous associations we may formulate context for what we see. Thereon, we may choose to focus more on certain details or smaller elements present in the image, which may hold greater meaning for us.

All of this happens rather subconsciously in our minds, with little awareness or control over the process on our part. Thus, anything we see will inevitably be interpreted based on our past experiences and knowledge, making any given visual information highly subjective. This concept is even more magnified when it comes to art. These are exactly the kind of concerns that are addressed in Sajjad Nawaz’s solo exhibition at Canvas Gallery titled “Land – Escape”.

Nawaz abstracts landscapes through an extremely zoomed in perspective that accentuates the details yet isolates the subject matter. The landscape is reduced to its major elements – sand, foliage, rocks, water and clouds. In this way the artist distills the landscape and takes it out of context so that it can be studied as an independent entity, expelling all previous meaning and definitions attached to it. As a result it may no longer even qualify as a landscape, becoming open to interpretation as the audience sheds all prior associations and creates new ones. The landscape can be seen as a form of metaphor here, and this can be studied in terms of its broader implications for any subject, image, object or concept.

Visually the works have an ethereal quality granted by the softness of the charcoal’s varying shades interspersed with rough textured renderings of the rocks and other elements. The realism this approach achieves is uncanny. In certain cases, especially the water series, there is a certain opaqueness to the treatment of the darker areas that is reminiscent of old black and white photographs. It takes away the depth and turns it into more of a frozen image rather than a representation of an open space.

The artist is inspired by his own home in Bahawalpur, where the Cholistan desert dominates the surrounding landscape. Thus, a large part of his work features sand and cloud formations, and a few works depicting water, detached from signifiers of their original locations so that they take on their own identity as individual elements. The image gains more intrigue as it is turned into more of a texture rather than a landscape.

The removal of context serves more than just to offer an intellectual exercise for the viewer to understand the workings of an image, but is also an attempt to unify the diverse cultural variances in any given location. It in turn keeps us from identifying the landscape as any one particular location – even the color is removed and the image turned into standardized grey scale. This homogeneity in effect eliminates differences starkly present across cultures.

The philosophical questions posed by the works require us to “unlearn” what we know and rediscover through the image presented to us. The work questions what happens when an image is taken away from its representational basis and presented in a new light. Does it create similarities or enhance differences, or perhaps create new differences? In a way differences are eradicated as far as the image itself is concerned, as we cannot correctly place what specifically we are looking at beyond the broader sense that it is, in fact, elements of nature. However, individual differences will always exist. When it comes to interpreting the work, the eccentricities of our individual natures will emerge as each of us find different meaning in the same image, based on our personalities, past experiences, influences and backgrounds. The beauty of the human race is in its individuality, which sadly also becomes its undoing when it is used to propagate fear and hate. It then becomes a futile effort to remove our differences in favor of a more generalized view of society.

One Response to Land – Escape