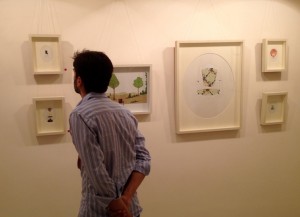 The last show of the season for Khaas Gallery Islamabad is “Kit and Kaboodle”, a two-person show, presenting the latest works of Saima Ali, miniature and collages, and of Syed Ali Karim, graphite on paper. The works are accurate and detailed in the execution. The two artists are from the same generation and both graduated in Miniature Painting at the National College of Arts, Lahore.
Saima Ali finished her BFA with Major in Miniature, Minor in Painting, Graphic Design and Ceramics in 2005 and since 2009 she teaches as Assistant Professor in the Miniature Department at NCA Rawalpindi. She has been showing widely in Pakistan and also abroad, in particular Jordan, Syria, UAE, Algeria and UK. When asked how and when she discovered the potential of a traditional technique like miniature, she answers: “As a student of Ustaad Bashir Ahmed, in the Miniature Painting Department at the National College of Arts in Lahore, I had a very traditional training of the Miniature painting techniques. The emphasis was on the perfection of skill and following the tradition. This was an important practice, as it is while I studied these historical paintings that I realized that there was more to them than just the obvious beauty that one saw. From storytelling, to the compositions, to the way multiple perspectives were shown in one painting, it was so much more than just a technique of painting. Just observing these paintings gave me so many ideas and possibilities of things one could explore. After two years of vigorous training of the traditional skills, I used the idea of multiple perspectives and my love for architectural drawings in my own work to create my thesis”.

Interest for architecture, in particular for the ability to depict tri-dimension through drawing, and fascination for the narrative aspect of traditional Moghul painting, are still very evident in the body of works exhibited by Saima Ali now in Islamabad. About the diptych “Habitat” and “I’ve got your back”, the artist says: “This work is a story about a family of chairs, where one chair leaves, and the rest are left behind, in a state of transition. ‘I’ve got your back’ is the title of the first piece where hundreds of chairs are shown with their backs facing the viewer. On one hand saying ‘I’ve got your back’ is a way of showing support, whereas on the other, showing your back means just the opposite. This story starts with chairs entering a house, almost like an intrusion of personal space. And these chairs are piled and lined up till they slowly start dispersing, until the end where only the few that are left to survive are shown in a kind of void, in the second painting. It is a comment on life, death and loss. People coming and going, and in this process those who are left behind, feeling lost in that void”.
The exhibition probably also has an autobiographical feature, in fact, Saima Ali explains: “This work started with the process of searching, cutting and collecting of chairs from magazines. It almost became a way of recollecting and preserving, the way one holds on to memories. These chairs were all completely different from each other with their own characteristics; they looked almost human. This process of collecting continues in the rest of the works where different patterns associated with each character of the chair in the ‘family portrait’ series is shown”.
Syed Ali Karim graduated last year. He explains that art has always been part of his family history, because some of his ancestors were Sufi poets, but his interest for visual art started later. “From 2002 to 2009 I was working at the Sindhology Museum in Jamshoro, making sculptures and some other works like cleaning antique coins, ecc…”. During those years Ali Karim understood that he wanted to have an academic training and left the job to enter NCA Lahore. “I started to make drawings with charcoal and graphite in 1998. I still work with drawing now but, after my studies, I started combining it with miniature paintings”. The works he presented at Khaas Gallery are graphite on paper. They represent entire or partial human bodies, persons involved in a fight or a choreographic dance.