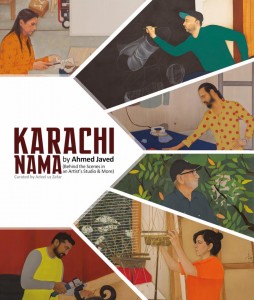 What takes place in an artist’s studio while the artist is at work is a mystery unveiled beautifully by Ahmed Javed in his recent exhibition, titled ‘Karachinama’, curated by Adeel uz Zafar. This show opened at Sanat Gallery on 12th October 2019, and is an extension to his previous exhibition, ‘Lahorenama’, which was exhibited last year.

Javed’s works are a documentation of the lives of famous contemporary artists of Karachi, such as Muhammad Zeeshan and Adeela Suleman, mainly in their work spaces and outside their studios. The artists displayed in this show are carefully chosen by Javed on the basis of how close he is to them in order to record them in their personal spaces on a more private level.

In his works, Javed uses stylization to play with perspectives and the sizes of figures and objects. His technique is deeply influenced by Mughal miniatures and their colour schemes which he brings into his work to maintain a connection between traditional practices and modern art.