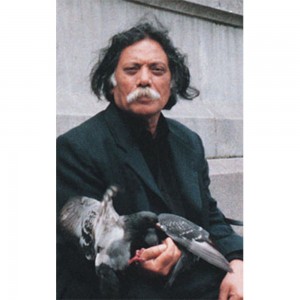 Jamil Naqsh: Art is a Way of Life

For Jamil Naqsh painting is a way of life. He is a man who has lived – and continues to live his life for art. Painting to please himself; he is a master of texture, light and space as the background for his uniquely painted figurative subjects. Now based in London where his work is exhibited at the Albemarle Gallery, his story begins in the ancestral home in Kairana where he was born in 1939.

Naqsh recollects, the house was filled with books, manuscripts and antique furniture, a place where poets met, and he would find a hiding place among the furniture where he would listen to the poets and his father Abdul Basit, recite. Early on he developed a taste for books and for the art of the miniaturists’ of history. Windows were always wide open in the house and birds flew in and out. They became his friends as he linked them to the art of the miniature paintings; these symbols of his early life were to continue live on in memories to be relived on canvas in time to come.

The artist was nine years old at the time of the partition of the country, and the family decided the sons of the house should leave Kairana for the newly emerged country of Pakistan. Jamil’s idyllic life ended and he was taken by his elder brothers to Lahore, never again to see his father. In Lahore, an experience that was to live with him throughout the years was a visit to the tomb of the legendary Empress of history Nur Jahan. Viewing the ruins of the tomb and musing on the grandeur of the past and the neglect and loneliness of current times, he suddenly realized that Nur Jahan was not alone, there were myriad birds nesting in the broken walls and flying amongst the blue coloured tiles. The experience appeared as a familiar affinity with his home so far away.

In 1954 Naqsh joined the Mayo School of Arts and Crafts, Lahore. He was a serious student who was particularly drawn to the art of miniature painting. After completing a year, he left the Mayo School to become a full time student of the dedicated miniaturist Ustad Mohammad Sharif. With Mohammad Sharif as his mentor, Jamil Naqsh learnt to begin work with the first rays of the morning and continue till evening; a work discipline the artist practiced for years. While his peers explored western art forms, Naqsh was committed to the study of his own aesthetic legacy. He was determined to understand and absorb the spirit of his roots in order to study modern art movements from a position of strength.  During his year with the Ustad, Naqsh produced several calligraphic artworks, and miniature paintings that he signed: Pupil of Ustad Sharif.

After a completion of a year with the Ustad, Naqsh bade farewell and made his way to Karachi. He discovered there was one shop in town that sold limited art materials. The artists were welcome to gather there, and it was there that Naqsh met Masood Kohari who was destined to become Pakistan’s first studio ceramist. From Kohari he learned of the art classes being conducted at the American Center by a Japanese/American artist, and of the free art materials provided to students. It was also a source of reference materials with books and magazines available, and Jamil was delighted. Looking back he describes himself as: “Walking on air.”

The American Cultural Attaché at that time was Dr.Schofield. He was immensely impressed by Naqsh’s work and offered him the opportunity to continue his art in America. Jamil Naqsh thought it over very carefully but he was committed to his own heritage and decided to continue his efforts in Pakistan. It was a decision he was never to regret.

As time passed Karachi flourished; Advertising Agencies opened and hired artists for their studios. Naqsh did well and within two years he became the Studio Art Director.

Naqsh’s first solo exhibitions took place in 1962, at Lahore Arts Council, and the Karachi Arts Council. In 1963, an early series of pigeon artworks were shown at the Karachi Arts Council, followed in1971 by a series of 51 paintings with the pigeon theme. The birds represented domestic harmony drawn from memories of his childhood, their feathers reflecting myriad colours. In later paintings they acted as a foil to the female figures, a contrast of movement and stillness.

In 1970, one met an American visitor who had seen Naqsh’s work and was keen to curate an exhibition of his work in America. Unable to contact Naqsh, he left messages with Naqsh’s friends inviting Naqsh to meet him over dinner to discuss the possibility. I personally carried the message to Naqsh which he received with a smile. Later I was puzzled to learn that Naqsh had failed to show up. When questioned he replied:

“An artist should be known in his own country before exhibiting abroad.”

That philosophy stays with me to the present time.

It happened that Najmi Sura, who was distantly related to Naqsh, visited his studio seeking advice regarding her artwork and metaphorically speaking, she never left.

Najmi Sura became the artist’s model and his muse. Naqsh ceased to work for exhibitions and though he did not exhibit his work, one was always welcome to visit his studio where his paintings were stacked. In the words of Ali Imam:

“The tactile quality of the pigments and the intensely concentrated and worked surfaces added a quality that is rarely found in the work of most of his contemporaries.”(Quote)

In 1971, the artist was quoted in the media on speaking of his work.

“I have no story to tell, no symphony to play, no poem to recite…If you must find a plot or a story, music or meter, then you should find them in my treatment of colour, texture, form and composition…” Naqsh’s work remained the crux of his existence.

His concerns addressing the surface of his canvas, the subject a means of manipulating space.

In 1977, inspired by his friendship with Dr.Faridon Setna, Naqsh produced a series of twenty-five Mother and Child watercolour paintings, which he donated to the Lady Dufferin Hospital, Karachi. Losing his mother at an early age, Naqsh mourned the loss of that special relationship which he idealizes as the only love that is unconditional.

In the 1980’s Jamil Naqsh’s work was recognized by way of awards. In 1980, the Shakir Ali Award was conferred upon him, in 1982, the Arts Council of Pakistan awarded him for twenty years of contribution to art; and in 1989, and he received the President’s Pride of Performance. That same year he was the recipient of the Artist’s Association of Punjab award for Pursuit of Excellence. More precious to him than all these awards was a tribute by Professor Shakir Ali. Working on a canvas some months before his death, Shakir Ali received a visitor who had brought along some recent paintings by Naqsh to show him. The professor smiled and snapped his brush in two saying he no longer felt the need to paint as he had a worthy successor.

In 1994, the Momart Gallery was opened under the auspice of Jamil Naqsh in Karachi and several of the young artists he had mentored exhibited their work. In 1998, Naqsh introduced the image of the horse in his work juxtaposed with the female form. Dedicating the exhibition to sculptor Marino Marini, he exhibited 150 works titled Woman and Horse.  In 1999 a group of distinguished art enthusiasts inaugurated an adjacent gallery as the Jamil Naqsh Museum with a permanent collection of the artist’s work. In 2013 the venue changed to a building designed by Cezanne Naqsh in Clifton.

Surprising their friends, Naqsh and Najmi Sura celebrated the Millennium by leaving their cloistered studio for Paris and London to explore renowned museums and galleries.

In 2003, a retrospective exhibition of Jamil Naqsh’s work was held at the Mohatta Palace Museum, Karachi two publications were produced, one containing the work in calligraphy Naqsh titled: Modern Manuscripts.

Now settled in London, Jamil Naqsh continues to paint with fervour beginning with the first rays of morning. He shows his work at the Albemarle Gallery, London, where enthusiastic admirers gather, and has exhibited his linear calligraphy – Modern Manuscript – paintings in Dubai.  Jamil Naqsh lists his right life decisions thus:

Not to obtain an art diploma

To join the studio of an advertising company

Not to settle in America

To make the friends he did: artists, writers, musicians and poets

All of whom continue to remain close.