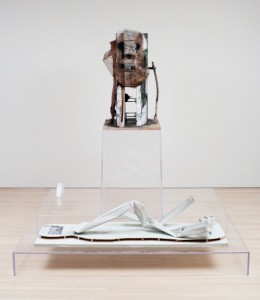 It Would Rain Anyway: A Case for the Mythic

[i] I prefer the original “beunruhigt” here, ‘made un-peaceful or un-calm’. Wittgenstein also refers to acts like kissing a lovers name or picture, as without aim.
[ii] In the latter case I am advocating an art that is ‘grounded in its own groundlessness’ to paraphrase Jean-Luc Nancy.
[iii] This kind of declaration of hate by proxy could be a seen as a (significantly less peaceful) counterpart of the Tibetan prayer wheel, where simply spinning the attached prayers is considered to have the same effect as orally reciting the prayer. Zizek cites the prayer wheel as an example of ‘interpassivity’, where a subject can mobilise certain interior states without experiencing them in the moment.
[iv] I would happily see the word ‘affiliation’ as a substitute for ‘belief’ in most cultural contexts; to expand on the history and current usage of this word is a task for another essay.
[v] In the meantime, the most rapacious and predatory people of the television and media world understand the brew of dogma and ritual that gives ‘peace’ to people (and peace can be malevolent too…). Amir Liaqat forcing mangoes down peoples mouths on a Ramzan television show in no way detracts from his role as religious authority in the eyes of an adoring public. I am suggesting-against my own instincts- that there is something to be learned here.