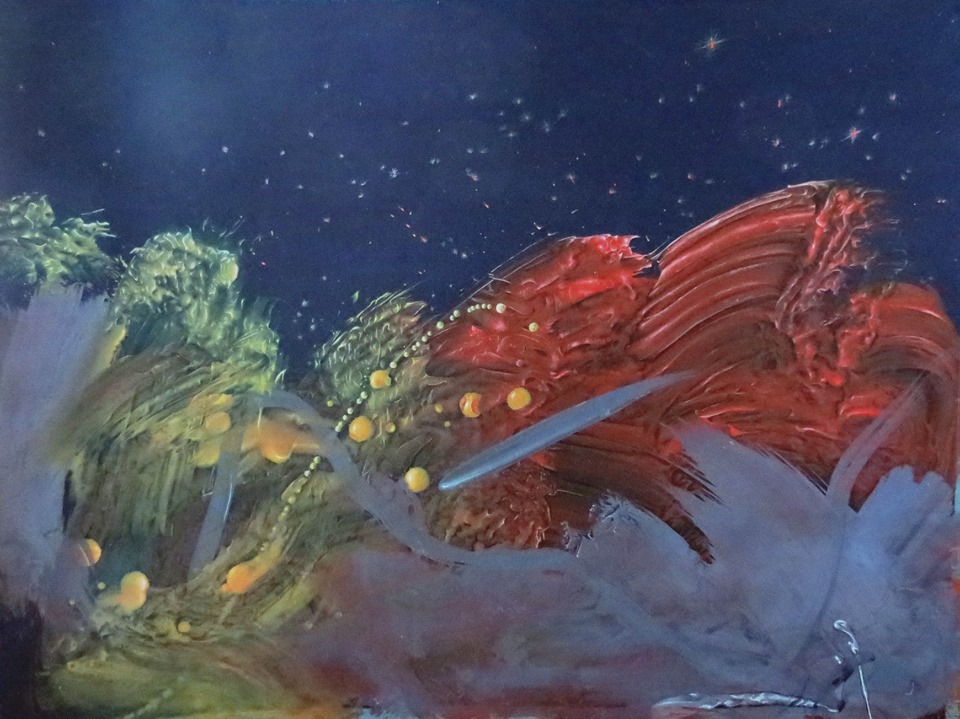 On 18th June 2019, Sanat hosted a show titled ‘Invisible Visible Light Dark’, which came together through the works of two creators. This exhibition displayed the works of Rahman Zada and Salman Khan, two young and budding Pakistani artists.

The first of the two artists in the exposition is Rahman Zada. Born in 1994, Swabi Pabaini, Zada graduated from National College of Arts in Miniature Painting, in the year 2018. Through his work, Zada has tapped into a topic that makes us all uncomfortable. He has based his series on a topic that is so highly personal to not only himself but also it would be safe to claim, to all his audience. Something we all acknowledge we are guilty of, but not knowing where to put a stop. He not only talks about the ease of interaction between people through technology, but he also discusses the worrying and lingering topic, of how ironic has the fact become that the technology which was meant to bring us all together has actually drawn us apart and highly affected the quality of human interaction. His aim was to materialise this feeling; something that is invisible, into something tangible through his art, which upon critical observation, is a real nudge to the spectator’s conscience. Zada has dissected the basic building blocks of mechanical devices as well as a human body and brought them together in one space, coexisting together, as if slowly intertwining with each other and blurring the distinction between one another. Wires, sockets, poles and switches subsist in a place alike, with human limbs-our arms and legs and other organs allied with operating the mechanical devices, each feeding off the other. He has placed the limbs in a position to depict that they rotate on an axis, intrinsic to the quality of the machinery. He has delicately utilised the varying colours and structures of electricity wires to portray human veins, chiefly the blood vessels. Zada engages the viewer by leaving the interpretation of these connections on them and reflect upon their lives.

The second of the two artists partaking in the exposition is Salman Khan. Born in 1994, South Waziristan, FATA, Khan graduated in Miniature Painting from National College of Arts, Lahore, in 2017. Salman has created a series of work, which is highly personal to him and jogs his memory of fear and the apprehension of being violated at the hands of Taliban and the military operations. Through his practice, he has tried to develop an association between his two parallel extremes, harmony and hostility. Khan has chosen to express himself and translate his emotions through his work, the process of which has proven to be highly meditative and healing for him. The technique of miniature, which requires high concentration and patience, has proven beneficial for the well-being of the artist, so safe to say, the journey of Khan’s series is as much of a joy to observe as his results. When observed from afar, Khan’s works appear to consist of aggressive bold strokes, but in actuality, they comprise of minute and meticulous rendering done in miniature painting technique giving varying tones of light and dark to depict the highs and lows of life. Its remarkable how at the end, the dread and anguish alter into content and tranquillity upon closer examination, almost like a happy-ending.

After going through works of several recent art graduates, what has been observed is the fact that many seem to acknowledge that they are responsible for the content they are putting out in the world and therefore, looking at how it may have a significant impact in altering perceptions. The current group of working artists in Pakistan have stepped up and taken upon themselves to explore topics, which are unspoken for, through their content. In a country like Pakistan, which is so fast paced that the hustle and bustle of our daily lives deafens us to our own heartbeats, the recent graduates of our art community have shown like-mindedness in wanting to explore the Self. Instead of working on substance which might be aesthetically pleasing and familiar to the eye, the artists have made a bold statement by creating carefully threaded and critically thought-of concepts, which are driven from their very own observations and personal lives. They have proven how a deep connection to a certain experience or memory, if translated to art, can be so much more impactful than creating work as a bystander. They have not only talked about topics which are brushed under the carpet like human addiction to certain things, its consequences and how we tend to deal with our emotions post-trauma, but they’ve also chosen beautiful techniques and mediums to translate their sentiments through. Several talented artists, including the aforementioned are continuing to incorporate traditional art techniques into their contemporary style and modern concepts and therefore, producing unique and exciting works.

The show remained on display at Sanat Initiative till 26th June 2019.