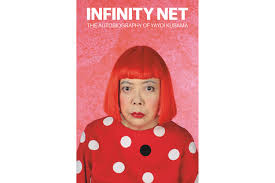 The monotony of her repetitive mark making in infinity nets brought on a hypnotic serenity over the viewer as her art paved the way from action painting and happenings, to pop art in New York. Being an obsessive artist, by creating multitudes of her infinity nets, polka dots, nude happenings, environmental sculptures and letting the message of ‘peace and love’ trump all else, has led her to create works not just for herself but served to lead the anti-war movement throughout the world, during the Vietnam war. In her own way, Kusama took on the world with a single polka, whether it be art history, psychology, philosophy or politics in her search for truth and the Self.

Kusama expressed her ideas of peace and love through her ‘Nude Happenings’ and ‘environmental sculptures’, where she painted naked bodies, with polka dots that then merged in the background, that was also filled with polka dots, in an attempt to ‘obliterate’ the Self. This idea of self-obliteration was in quest of reaching the ideal state of timelessness, which was appreciated by critics and writers for being beyond its time.

While it was New York’s openness that nurtured her creative powers, it was her childhood experiences and memories of unending landscapes of Japan that always informed her works. Her quest for truth came not from following the popular art trends of the time but by looking through what surrounded her and came from somewhere within. Though she openly loathes the conservatives of the Japanese society and its lack of appreciation for its own heritage and traditions, this autobiography speaks volumes to her internalization of the beauty and sublimity of its arts, while riding the tides of contemporary art.

It is uncanny the way she takes you on a wild adventure through the Swiss Alps, driving at a speed that was sure to end her life, and then seamlessly transporting you to the silent countryside of Japan and its snow covered mountains. Kusama’s writing retains the romanticism of the Japanese landscapes, while her paintings place emphasis on each brush stroke just as the traditional Japanese ink paintings did, where the sensitivity of every mark is definitive in beauty and equally important in the completion of the picture. This sublime nature of her works is ever present in her want for creating a mark that creates its own universe through repetition and timelessness.

She not only goes on to establish her acumen as a phenomenal writer, having published novels, plays and poetry throughout her life, but she also takes you through her world in the most intimate of ways that makes you feel like you’ve seen her go through life while you were sitting right next to her.

However, the autobiography is not without bringing forth her appreciation for artists she has crossed paths with. She directly credits Georgia O’ Keeffe for being her first benefactor and supporter, and whose encouragement led Kusama to leave Japan for New York to become a star. Kusama calls her an artist who painted the truth with such courage that it still holds up O’Keefes name as one of the best women artists to date.

Along the way she mentions all those who helped her, copied her and provoked her, walking with the reader through the streets of New York in the 1950’s, and 60’s. She describes the art scene, the hippie movement and her own work with such urgency that they all seem to be props in making her life progress in ways so human and yet so surreal. Artists like Andy Warhol, Donald Judd, Mark Rothko, Joseph Cornell, Roy Lichtenstein, all have their places in the theater of Kusama’s life and art, just as naturally as her own parents and their problematic relationship with her. From her childhood in postwar Japan, her success in her youth in Japan, her struggles of being a starving artist, to her stardom in New York and then back to a psychiatric ward in Japan, where she voluntarily lives now, she takes you through her highs and lows in the most intimate manner.

If it were not for Kusama’s unflinching  writing style, even if at times the book appears to be bragging about her achievements, it is necessary to note that she was showing with all the biggest names of the art world in New York in the 50’s and 60’s and yet her name has not been included in the western canon of art history as prominently as her achievements deserve. She was a success already before she landed in New York and her life was so multifaceted that it is no wonder that nine decades later her practice keeps evolving like a shape shifting dragon.

She has not only been an artist but an activist and has had an almost cult-like following of artists and hippies who have gone to jail with and on her behalf. She’s been to jail multiple times for her works and promoting the message of peace, all the while sacrificing acceptance from her own country for beliefs and for following her truth.

What better way to access her than in her own words in this autobiography, which was published in 2003 but is even more relevant today when she lives as a recluse with only art on her mind.

Having a full life behind her and a fuller future ahead of her, in her nineties now, Kusama still goes on to create furiously as her obsession with timelessness races against time itself and her revolution of the Self becomes all about discovering death and giving meaning to the nothingness it promises, through her art.