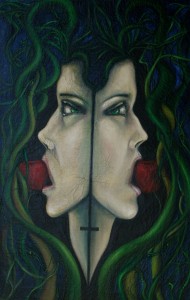 The recently opened solo show titled ‘Weeds’ at Canvas Gallery has been support by renowned critics, curators and artists, and is a massive undertaking with 40 works that deal with a range of issues, including the self and individual as female in society. With a small published catalogue of the exhibit, the exhibit is accompanied by rave reviews and testimonials by individuals such as noted art critic Marjorie Husain and publisher Tauqeer Muhajir.

The artist, Zehra Laila Javeri, is directly affected by her relationship with Laila Shahzada, her great aunt. Shahzada is of course one of the most highly regarded and groundbreaking Pakistani modern women artists. This inspiration and early training continues to influence Laila Javeri (who shares the name with her great aunt) in her current body of work. In this theme, feminism seems to be in integral part of Laila Javeri’s body of work. The feminine figure features prominently in most of her works in the exhibition, allowing it to be a cohesive theme that holds this show together. The feminine figure is painted and placed in a diversity of poses, usually central to the image, with the surrounding seeming to emanate and orbit from it, thus directly placing it as the core of this show’s identity.

Perhaps one of the more iconic and ironic works in the exhibition, and a possible starting point to view from, is The Golden Fruit. This work is clearly inspired from the downfall of Eve in the Garden of Eden when she bit off the forbidden fruit. In this work, a pregnant woman looks away from the viewer, her eyes closed, just before the act itself. This subversion of politics of the gaze, in which the viewer gazes upon the figure, complicates the work. We, as the viewer know what will happen, but in the work it is an act that has still not taken place. Vines creep over her body and she is surrounded by layered darkness, creating a contrast between the fore and background. These multiple layers create a unique experience for the viewer, and allow one to discover the various meanings and contexts within which this work is situated.

Similarly, many other pieces seem to deal with the role and anxiety of the artist as a female in Pakistani society. While in her artist’s statement Javeri insists that her work expresses “neither social commentary nor political gusto” it seems that current issues do seem to pervade her work. It is indeed hard to disconnect the status of women in contemporary Pakistani society when viewing her work with its strongly feminist themes. The Golden Fruit for example, could very well be a statement on current judgment and control of women in Pakistani society, rooted in our patriarchal system and our Abrahamic folklore. In most of the work, the symbolism of weeds and their hold on the female figure is profound and upfront. For the viewer, before reading the artist statement, an overall reasonable conclusion of some of the work can be the relationship of a woman to society, bounded and bonded by circumstances that seek to keep and pull her down.

There are places however, where the show lacks coherence and maturity. While the artist seems to have taken on an important theme of her work, and this show brings together several years of her artistic life, the viewer can be disappointed by what is missing. The artist while disassociating herself from making political statements, cannot disconnect from the national traumas, according to her, her work is a “response” to them. However, this seems to be missing at various levels from the work. It seems that this dilemma, of wanting to make a social statement, but also trying to distance oneself from it, fails to create a visceral and emotionally intense body of work. There are indeed some stand-outs, and the viewer is drawn to see the complete show, but given the artist’s maturity of ideas and thought, the viewer wants more, and wishes that the same could be present in the work more coherently.♦

Aziz Sohail is a curator based in Karachi