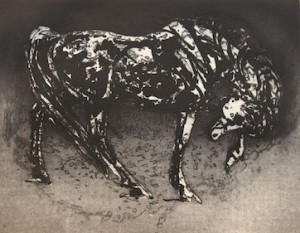 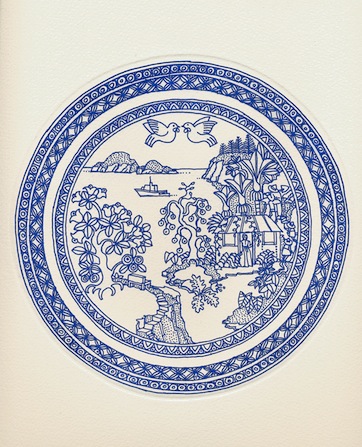 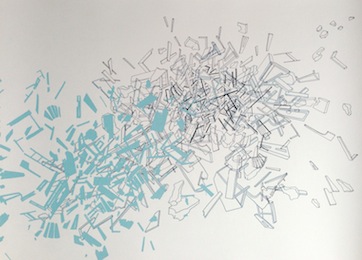 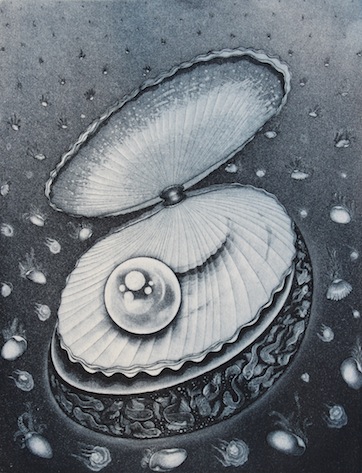 In Print: Sydney to Lahore

“Do you know what a cicada is? Do you have them here? Ok”… he says in response to my blank face, pointing towards his shirt with an insect form logo that has large eyes and explains the name of the Cicada press, referring to how the cicadas are known for making a lot of noise, a rhythmic sound. Michael Kempson, visual artist and academic, is verily true to that spirit: collisions make noise like the exhibition titled ‘Sydney-Lahore: Prints from the collection of Cicada press and Saeed Akhtar Studio’, curated by Imran Ahmad and Usman Saeed. The curatorial brief mentions that “the idea of this show originated when printmaking graduates from the National College of Arts, Lahore, Fatima Saeed and Imran Ahmad enrolled in the Masters Program at UNSW College of Art & Design in Australia. With Michael Kempson, Senior Lecturer, Convenor of Printmaking Studies and Director of Cicada Press at UNSW Art & Design as their teacher, they invited Saeed Akhtar and Usman Saeed for Cicada Press Residency in July, 2013”.

The exhibition came just at the right time to break the silence in the Pakistani printmaking world, right before the opening of the 1st International Print Biennale Karachi 2014 at VM Gallery. The show comprises selections of both collections along with loans from a few other individuals.

A few minutes of intent listening to the exuberance and philosophy behind the collaboration are a jet ride through continents and eons. And particularly for me the most fascinating part is the ‘meaning’ of being an artist in the world now.

Reg Mombassa, a recognized Mambo designer, Australia’s most successful commercial artist and the mind behind the inflatable kangaroos at the 2000 Olympics’ closing ceremony and his character ‘Australian Jesus’ – founding member of ARIA Award-winning band Mental As Anything has his prints displayed at this show. The works are a new language, tongue-in-cheek but layered, ordinary but extraordinary and share the versatility yet singularity of Mombassa’s journey. Kempson’s work itself is relevant here as it comes across as the perfectionist’s stance on the not-so-perfect little things around us. He’s also using icons and symbols such as national animals and soft toys, open to the viewer’s response on relationships (Friends and Acquaintances series)

Kempson shares works after the kermadecs, an exhibition which happened after nine artists took the brave heart vessel through  the Kermadec region – “between New Zealand’s North Island and Tonga is one of the last relatively untouched wilderness areas on the planet”  and from these nine we have the works of Elizabeth Thomson, Gregory O’Brien, John Pule and Robin White exhibited at the Sydney-Lahore show.

The ‘dot’ paintings by Indigenous men from the western deserts of Central Australia are striking in detail and the color palette itself has a monotone, dreamlike feel. In the early 1970s western dessert art has been called the greatest art movement of the twentieth century where art became the nucleus of restoration and reminiscence. The exhibit also present the works of Vic Chapman who  In 1975 achieved the distinction of becoming the first Aboriginal person inNSW(and possibly Australia) to obtain the status of School Principal at Gwynneville, Berkeley and Thirroul Public Schools until his retirement in 1990.

Kempson writes in his essay for Cicada Press: “In 2010 I took an exhibition Aboriginal Dreams –– Indigenous Art from Papunya Tjupi, to Karachi in Pakistan. While there I was introduced to the distinctive visual vernacular of Truck Art in the explosion of colour and design festooned on buses and long haul vehicles. I recognized in this a correlation with an innate assertion of cultural identity found in the art from Papunya. Most who see Western Desert Art may not understand the meaning of the pulsing rhythms inherent in the prints and paintings, but the direct or elemental connection made with viewers is real and powerful nonetheless.”

Usman Saeed stresses how he wanted to display Australian and Pakistani prints to engage in dialogue with one another and it comes out effortlessly. He mentions the courage and endeavor of the young printmaker Zaira Ahmad Zaka who has initiated a printmaker’s residency in Islamabad. Such individuals are a breakthrough for the art of printmaking itself. Zaira’s prints appear architectural in form, inviting the viewer into an unfamiliar adventurous space.

The Pakistani front is an equally rich overload of artists and their works through a variety of generations and practices. Sixty seven years of the printmaking history appears courageous and intense in retrospect. Abdur Rahman Chughtai (1899-1975) and Sadequain (1930- 1987) were the experts of traditional printmaking techniques and thoroughly explored them. Printmaking history paved its own path from western influence in the form of sponsored workshops; 1967 by the American Michael Ponce-de-Leon, 1986, Bartolomeu dos Santos (the Slade Print Department) in London, Peter Daglish in 1992-1993, Walter Crump, Fulbright scholar from the US who taught for a year at the National College of Arts to the printmaking departments of Punjab university and NCA to artists such as Anwar Saeed, Afshar Maik, Laila Rehman, Naazish Ataullah  and Sabah Hussain who took graduate and other foreign qualifications in printmaking.

From Usman Saeed’s bejeweled detail in the brooch-like ornament to Naiza Khan’s magnificent explosion of form, returning from the Sydney-Lahore collaborative I see history, content and regions overlapped amusingly. Yet individuality stood out through all the works and it is individuality which cultivates continual dialogue. Our differences make us look for our similarities.