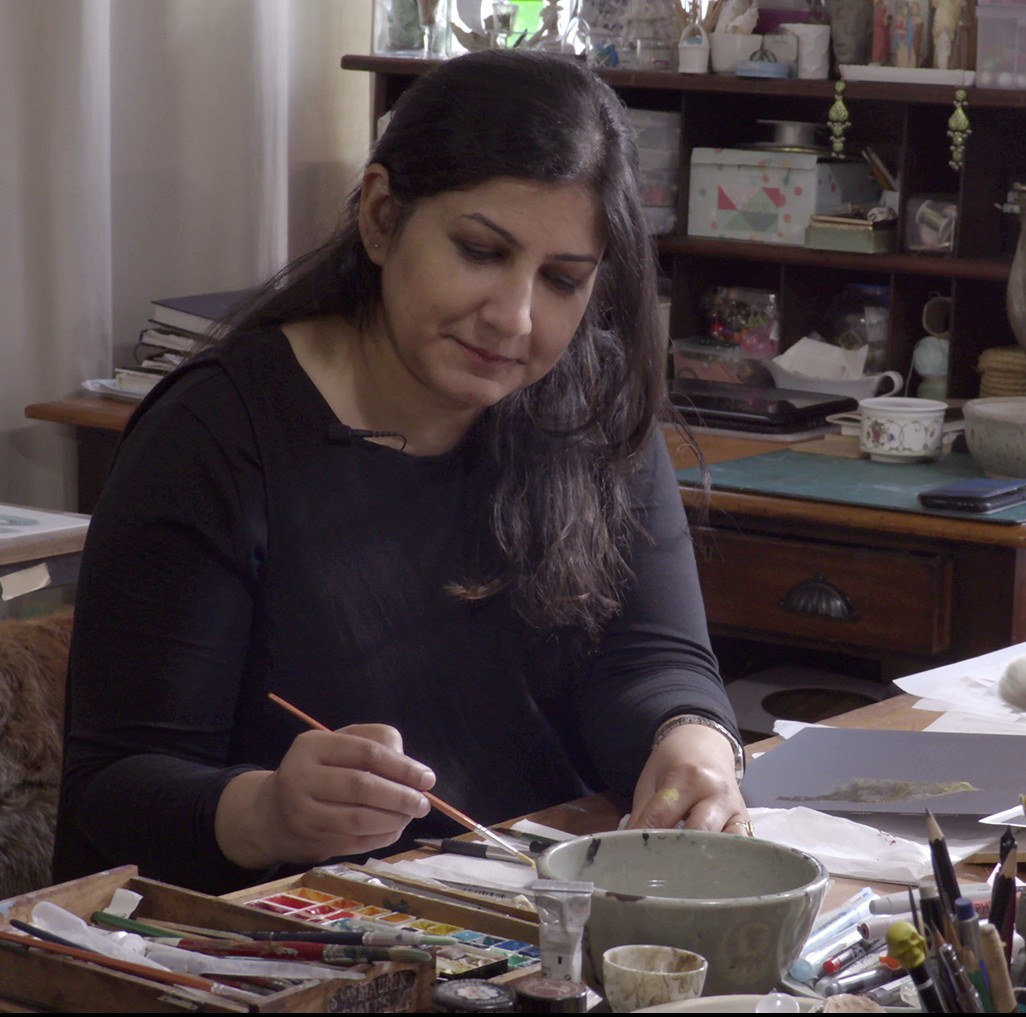 In Conversation with Nusra Latif Qureshi

AH: Can you tell our readers about your background? I come from Lahore, I studied at National College of Arts and moved to Melb

AH: Can you tell our readers about your background?

I come from Lahore, I studied at National College of Arts and moved to Melbourne to finish a master’s degree.

AH: A clichéd yet integral question: Why do you do What you do?

Raison d’etre: I would be a very unhappy person if I was unable to articulate the ideas I am partial to. It is said that the personal is political. I find it relevant in many ways. Using personal interpretation of life and histories around us is one way; another could be refining existing traditional practices to depict new meanings, reinterpret concepts and discover complexities. The end justifies the means.

AH: What are some of the themes/ideas you pursue through your art practice? And Why?

There are certain themes like forgotten strands of history and devices of painting that continue to fascinate me. In my paintings and digital prints, I engage with the visual histories of several cultural strands, questioning conventional interpretations, pulling apart and reconfiguring the found patterns to construct new narratives. My particular focus has been investigating little known histories of colonial eras, questioning established narratives and engaging with the politics of representation. I also use photographs, botanical drawings, technical illustrations and historical paintings as visual and conceptual references to construct unanticipated accounts of known events. While heavily referencing Mughal painting with its exquisite detail, I try to create a dialogue that offers new insights into both the past and the present while maintaining a visually appealing aesthetic.

AH: How do you organize your ideas/thoughts before, during, after the process of art making?

The process involves a great deal of collection of images and ideas. I collect these from various sources; the subjects ranging from traditional textiles to cityscapes. I am also very interested in organising the images into suitable categories depending on the ideas; at this point some culling also happens. During this stage many new directions are found that lead to possible practical solutions. Many projects come about as a result of a curated show, and some are commissioned. It can be helpful or conversely, limiting if there is a pre-determined focus that directs the work.

AH: Can you share with us your physical process of art making? From conception to exhibition?

I take the initially selected images and usually trace them on painting surface to construct a structure. This process occurs through complex layering, fragmentation, erasure and juxtaposition of accumulated visual material. After a painting is finished, I seem to distance myself from it. The curator usually plays a major role in how and where to place a work in an exhibition.

AH: Who were/are your favourite artists/artworks? and Why?

Rothko and Howard Hodgkin for their romance with colour and texture; Louise Bourgeois for her focused personal investigations into things too difficult to articulate, and her absolute dedication to her work; Georgia O’Keeffe, for her focused and disciplined exploration; Yinka Shonibare, who takes one into patterned political follies; Matisse for his use of colour and pattern, and a recent love, John Russell who inspired Matisse with his breathtaking mastery of colour in landscape. Also love these souls: Louise Paramor, Kara Walker, William Kentridge, Vernon Ah Kee, Ah Xian, Fiona Hall and Guan Wei.

AH: What is the role of an artist in the society?
The artist reflects on what is intentionally or unintentionally overlooked by the society. Art itself offers a sane version of events, often very considered and refined.

Given that historically the economic relationship between the patron and the artist keeps changing, this exchange is often subversive but sometimes explicitly critical. Despite the changes in this diametric association, artists have found means to speak their mind through their practice over the centuries.

AH: How has living in Australia vs living in Pakistan affected you/your art practice?

I mostly find it liberating being considered just an artist. My cultural sensibility is still based in Pakistan, though it is augmented by living next to various cultures thriving in Australia; I bring many rich traditions to it and in turn, accept what other cultures bring with them.

I do not carry the weight of explaining my Pakistani tradition and culture to a ‘western’ audience. One reason for this stance is that there is no isolated or ‘pure’ tradition in any culture; all living cultures lend and borrow, cull and adopt from the ones in their vicinity. Right now, a social stagnation is visible in many societies as they strive for a puritan state. At the same time, there is an inundation of communication technology with its potential sophistication to overcome boundaries and borders of all kinds. Thus the global space, when and where it tries to assert itself is interesting and continually evolving.

The other reason for not becoming a mouthpiece of a certain ideology is that I as a student of art embrace the art histories of all regions and eras. As a practicing artist I do not see any limits to my access to histories that are not part of South Asia. Intercultural encounters gave South Asia its potent flavour and sustained the vigorous growth of thought and image for thousands of years. I would contest a view that insists on categorising cultural production as definite and static. Furthering that thought I find the artists obsessing over a ‘traditional’ grandeur are only copying themselves to exhaustion with watered-down versions of their earlier works.
AH: What is the best part about being an artist for you?

Having an artistic licence seems to be an advantage. I also find it rewarding that I am able to explore one set of ideas and have the choice move on to another exciting area. It is remarkable that the creativity in this field can keep one thinking and engaging without the fear of stagnation.

AH: Do you make a living off your art practice?

Yes I am able to. I will tell you an anecdote. When I first came to Australia, I told people that I am an artist. The response mostly was: ‘But what do you do for a living?’ I would say: ‘Nothing, I paint’. This used to amuse and offend me in equal measure, though now I have come to understand that this is an Australian socio-economic scenario for an artist.

AH: What is a suggestion you can give to aspiring artist?

It is something that has worked for me: perhaps consistency is the key. Certainly consistent practice and preferably continuous exhibiting remains helpful.

Born in 1973, Pakistan, and trained at the National College of Arts Lahore, Nusra Latif Qureshi has been living and working art in Melbourne, Australia since 2001.  Her art practice uses various elements from south Asian traditional miniature painting, but is not limited to that as she stretches it out as far as using photographic and holographic images in production of her art works. From miniature paintings she draws various factors like attention to detail and color, as well as figures and attires, and the references then are juxtaposed on elements from art history, photography and notions of gaze, ambiguity and appropriation through a female perspective. Her audience is spread across the east and the west as some of Nusra’s achievements in her artistic career include her art works being exhibited extensively all over the globe, like Kunst Historisches Museum , Austria, 5th Asia-Pacific Triennial, 52rd Venice Biennale, Italy, Smith College Museum of Art, MA, USA, and many other important artistic venues and events. Some of her masterpieces are also housed in the collections of British Museum, London, Fukuoka Asian Art Museum, Japan, Museum of Contemporary Art, Sydney, Parliament of Australia, Canberra, National Gallery of Victoria, Queensland Art Gallery, Australia , to name a few.

“…and I wanted to explore the history, and art history and its relationship to the artist…”  Nusra