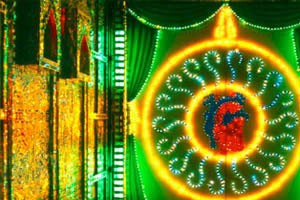 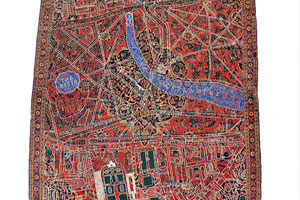 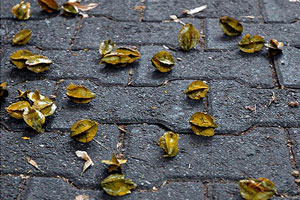 In Conversation with David Chalmers Alesworth

Zohreen Murtaza: I would like to ask you about your life before Pakistan, what prompted you to move here?

David Alesworth: I grew up in Surrey and really began to study art as a teenager whilst at Brooklands Technical College in Weybridge, which had a fantastic new art department run by two fresh graduates from RCA, a number of friends from that period also went on to Art School studies. It was a period in my life where I moved from the sciences to art making, as my whole ambition in life. My undergraduate training at Wimbledon School of Art was in Sculpture, it was quite conventional and very “making” orientated. I was awarded the Picker Fellowship in Sculpture at Kingston University after my BA hons. and then went on to a Sculpture Chair at Glasgow School of Art along with some teaching. I met Durriya Kazi at Kingston, my first wife and she was my initial link to Pakistan.

ZM: What were your interests and concerns when you were working in UK? Can you elaborate on the kind of transformation that your work underwent when you shifted here?

DA: I saw myself working in a late Constructivist tradition, dialoguing with the works of such as Eduardo Chillida or Anthony Caro and their more recent UK offshoots Anthony Smart, Lee Grandjean, Glynn Williams and Katherine Gili amongst many others. Looking back on it I have always had an inclination to collaborate, I can think back to various school projects, foundation studies, my undergraduate degree and even early teaching, all of which involved aspects of collaboration. In Karachi this became even more pronounced, Durriya and I collaborated on some projects, the working with local crafts people became more collaborative and the large public projects of the 1990’s in Karachi, even more so with the involvement of other artists. I think these collaborative projects enabled me to explore other territories, in fact we all did in ways that reached out beyond our current practices. I literally lost my studio in Karachi when my brother unexpectedly died, having not gone into the studio for months, which was outdoor, I found everything had been stolen. Thereafter I didn’t have any studio for over a decade, entirely working in the markets and between the workshops of many urban crafts people.

ZM: From popular culture and kitsch to an inclination towards researching,   meticulous archiving and recording, there seems to have been an almost seismic shift in your interests and concerns over the years. Moreover the diversity in your medium and expression is staggering. Could you elaborate on that?

DA: As an artist I aspire for my work to grow out of my immediate environment and associated research interests, these have been Karachi and Lahore in terms of Pakistan. Whilst Karachi were the years of (what has come to be known as) “Karachi Pop”, Lahore was a consideration of the archive and the Post-Colonial, a period of reflection and seeing myself through other eyes, even to look at myself through the lens of the British Colonial traces. I found myself living in the Royal Artillery Bazaar and spent a lot of time considering Bagh-e-Jinnah/Lawrence Gardens and even researching this amongst the Kew Archives in the UK. My interests are wide, Contemporary art obviously but also science, history, the environment, outdated technologies and cultural crossings. The environmental, the natural world and garden history, my other career spanning thirty years is as a landscape designer and horticultural consultant. My grandfather F W Alesworth was a horticulturalist and has an HT rose named after him.

ZM: Works such as “Object- as- locus- of- hybridity and hybridity- making” and “The Age of Wonder” indicate a natural curiosity about the world around you, is that one of the things that fuels the necessity to work in public and collaborative projects?

DA: I am at heart a “Naturalist” in the old fashioned sense of the word and am always inspired by nature, I keep a microscope on my work desk for daily use. As a teacher I have always shared my enthusiasms and perhaps the public work trajectory comes out of that. I consider the encounter with art, it’s disruptive and illuminating power to be at the heart of my art ambitions. I like to draw out and build connections between things and people and yet for my own practice to be less about myself in any obvious way. Ultimately of course all creative work is essentially autobiographical, it cant be avoided, but why wallow in it? Surely the world outside and other peoples vision and experience is always more interesting than ones own?

ZM: Your interest in science, nature and gardening combined with art has led to the creation of some interesting work such as “Trees of Pakistan” where you emerge as an ethnographer of sorts, while in other works you seem to be searching and delving deeper (as would perhaps a diligent researcher and even the gardener in you?)  till something emerges. What are your thoughts about this observation?

DA: “The Trees of Pakistan” arose from the question of building additional context for the textile works, that I term “textile interventions”. They deliberately address Dr William Roxburgh’s Flora Indica of the 1790’s, as for the gardener in me, certainly it teaches me how little I know, how my plans are merely my plans in the face of nature and it teaches me much about time.

ZM: The individual and society, culture and practice, identity and hybridity: these dualities become the complex interwoven strands of a lot of your work. Can you elaborate on your work titled “Seed Intervention” in this regard? Why choose the Arjun tree and not any other?

DA: The Arjuna tree (Terminalia arjuna) I like to think was named (by some British botanist) after Guru Arjun Dev Ji who was tortured near to death in 1606 by the Mughal Emperor Jahangir and subsequently vanished after wading into the Ravi at Lahore. This often tortured looking tree besides going leafless twice in the year also has particulary star shaped seeds. I sterilized some of these, dyed them yellow and placed them under Berlin’s Linden trees and around Unter den Linden near Brandenburger Tor. The Linden tree (Tillia cordata) which goes so deep into the German cultural memory as do the ghastly yellow stars of the Nazi era. It was a very low key botanical intervention, but I was thrilled to see Germans picking them up and looking into the Lindens above with great curiosity.

ZM: How did you start working with embroidered carpets and rugs? Can you talk about the process and concerns that eventually resulted in this series?

DA: They began decades ago in my childhood experience of a huge Kashan carpet in our dining room, I would play amongst it’s many borders, it was my private kingdom and it was a safe haven. Later I wondered about its central device, the Charbagh and what might lie at it’s nucleus. As a teenager I equated parts of it’s design with my own encounters with physics. It subsequently disappeared when my parents died, I think thrown out by my sisters. Perhaps I am always addressing that single lost carpet. More recently I had proposed a sculptural work, an intervention in the desert near Sharjah using a mapping of part of the estate of the Palace of Versailles with solar lights. I intended a short lived mirage of Versailles in the desert at around dusk each day. Needless to say this didn’t happen and I looked around for an equivalent upon which to map my fragment of European garden history and stuck upon a Kerman carpet. This was huge, in tatters and had been following me around in my rather nomadic life at that time for many years, I took it as a cultural signifier of another territory upon which to superimpose another history. It eventually became the work “Garden Palimpsest” 2010 and the first of the textile interventions. A dialogue of world views, of privileged spaces, of garden ambitions and of cross-cultural attitudes to the idea of water. It also played with Michel Foucault’s theory of the heterotopia in which he addresses the oriental carpet in his third principle. My own research suggests Andre Le Notre was exposed to Islamic art as a young man and I like to believe this has some impact on the design of the gardens of Versailles.

ZM: One could argue that the maps could be viewed as Impositions rather than “Interventions” for these carpets were often viewed as metaphors for the gardens of paradise , moreover your  process  involves the insertion of a needle to alter the fabric of the carpet is in itself a rather violent act. What are your thoughts on that?

DA: I assure you this violence is mostly played out on my finger tips, which are I think permanently scarred, but if you wish to pursue a line of cultural violence in my making of these works that is your prerogative, after all, creation is always in part an act of violence. I see these works more as  acts of penance, of cultural expiation and even an honoring of the carpets at the end of their lives and I give them new lives, the embroidery itself is fully reversible and I spend almost as much time taking it off as I do in putting it on. Embroidering a carpet is not a good idea, more akin to carving stone than needle-point. In their making I seek to achieve a place where the intervention and the underlying paradise garden are in balance, in equivalence.

ZM:  What artists inspire you or have influenced your work?

DA: Many different artists at different times in my life but amongst the current ones are Mark Dion, Grayson Perry and always Helen Chadwick. These days I’m trying to read all of Humboldt’s texts and Michael Pollan on Nature and Culture is always a real inspiration for me.

ZM: Can you share a little about your current and future projects?

DA: There are lots of current projects in process and still more gestating, some of which are collaborative. For me the move to the UK from Lahore is still an opportunity to be addressed through work, the textile embroideries take a very long time and I have several on the go that began in Lahore and may take yet another year or more to be finished.