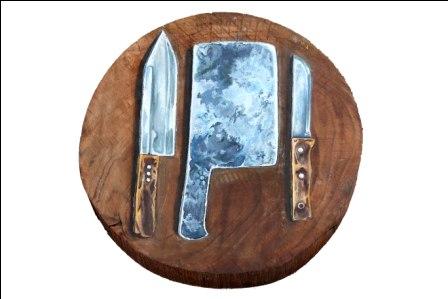 Green Day etched their name in music history with the famous “Wake me up when September ends” song. The melodic tune leaves a significant mark in your ‘music memory’ complimented by Bille Joe Armstrong’s vocals. A real pleasure for the senses, as is Studio Seven’sinaugural show entitled “Ibtidaa” that began on the 2nd of September and ran its month long reverie of 50 young artists with 50 individual pieces each.  So, lets begin.

The entrance leads you down a vast space filled with stirring light that magnificently dilate your senses. In fact, once you’ve taken everything in it really is a matter of where to start. My eyes fell upon a peculiar untitled piece by SamraRoohi. The lenticular print execution perfectly balanced the subject’s prominent wrinkle lines and smile. In a slight forward bend he carries what appears to be a rather large wrench and an even larger smile. I was intrigued and moved on until; out of the corner of my eye, I saw the wrench was now an AK-47. One step forward, two steps back and the same shift happened. The gallery manager could clearly see my interest in it and we discussed how this piece captures the media intention of always showing a framed story.

This nationalist, current and assertive work seemed by far the overall theme of the exhibit. Whether that was by chance or a controlled consequence by the gallery worked very well in their favour. My eyes skimmed more pieces and clearly there were others similar to this. Most hadsubjects from the beautiful areas of our country that have seen a lot of bloodshed and bullets. Another untitled piece by Qutub Rind shows a bearded and turban-wearing man accompanied by his semi-automatic rifle. Executed with chamakpati on wasli the colours and mundane action set a different mood as opposed to the weapon placed. There were others similar to this, like Qasim Bugti’s Gouache on wasli piece with three blurred tribal men. No weapon or intention just a commentary that a second look (and perhaps chance) is always worth it.

There were mesmerizing pieces too, like Ahsan Mohiuddin Syed’s Choose Your Way. This wonderful illusion played on the famous ‘dream within an dream’ sequence thanks to Syed’s pencil on paper executions. Similarly, Istrahat Waheed’s perforation piece on paper entitled The Poisoned Daises was simply fantastic. The perforation dances with your vision and draws you closer to whatever narrative you wish to conjure up between the man and woman.

Sculpture complimented the mood and invited another sense – touch. Sikandar Asghar’s ceramics were a smash hit, figuratively. Affan Baghpatti took the ground from under your feet with his Pigeon in Pipe, literally. Sandeep Kumar’s oil on canvas piece entitled Heatstroke illustrated the price we pay for the negligence of many and greediness of a few. Hassnain Noonari’s My Savings piece of computer parts was a web of intricate glimpses into the artist’s struggles. And Mir Jabal touched inner warmth with his Hope painting brushed with oil paints and mix media. Each piece demanded attention and thought concluding a wonderful exhibit.

50 artists together can wreak havoc, form clusters or just not compliment each other. Yet these fabulous 50 talents have shown Pakistan’s future is awake, resolute and in no mood of being isolated.