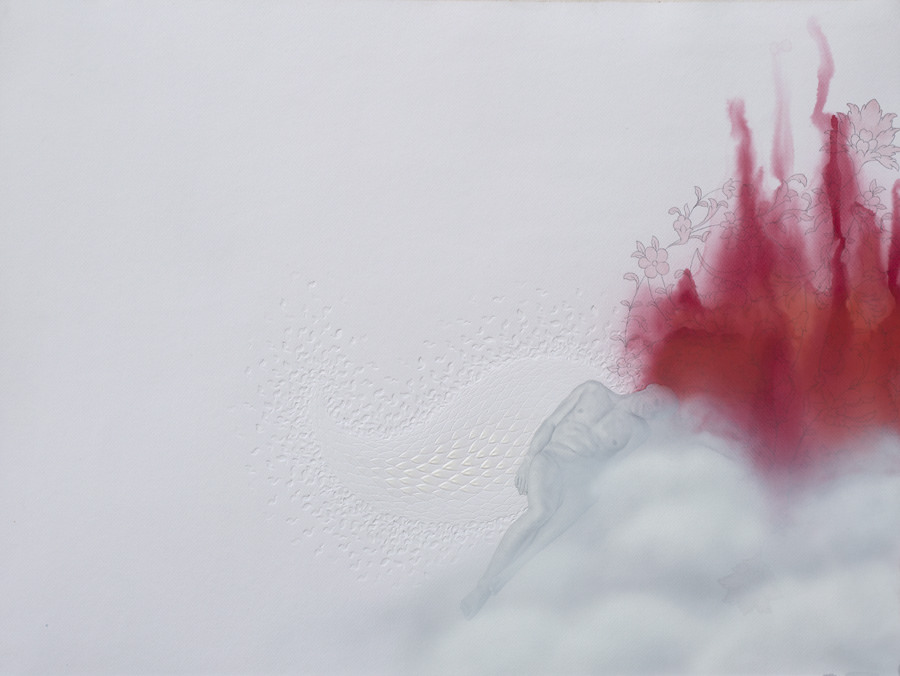 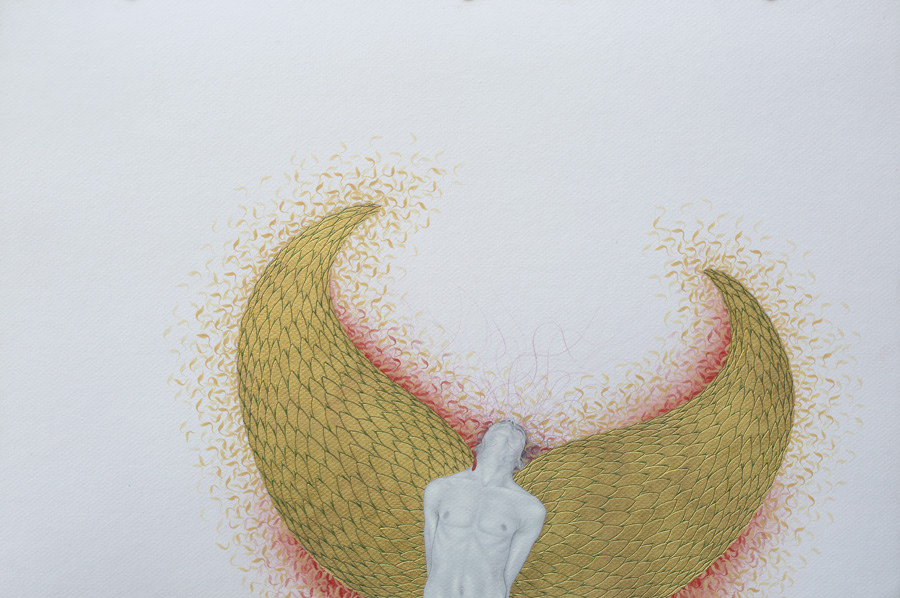 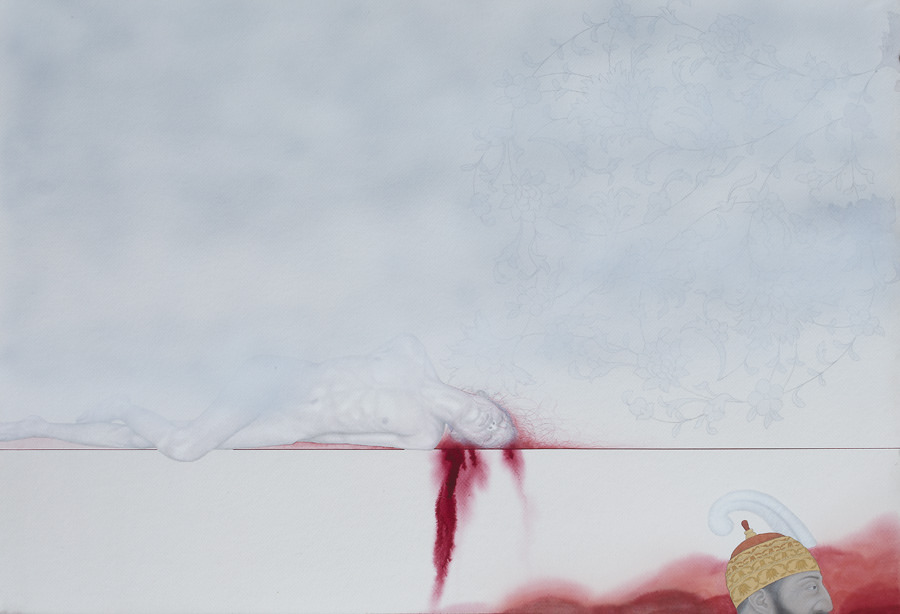 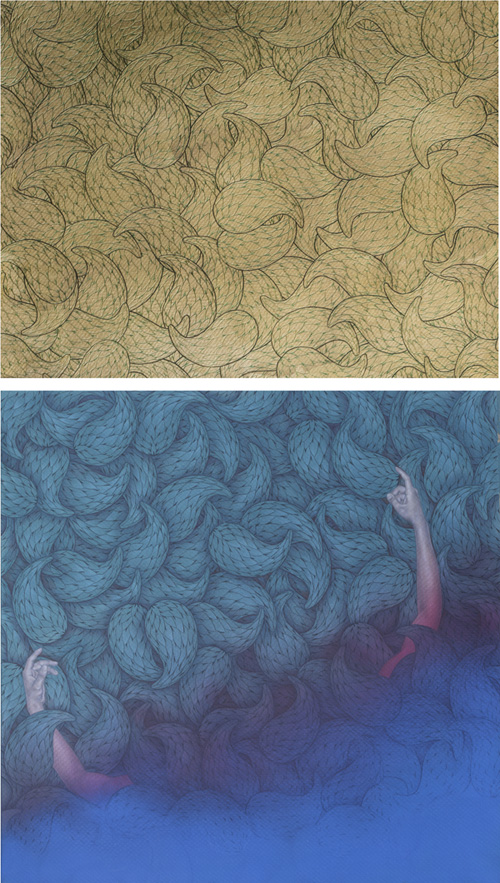 I Washed the Dust of the Eyes with Blood

Humanity is at war. Narrowing it down, it is the age where Muslims (as well as those giving themselves this title) are regularly in the news as attackers and terrorists, as well as victims of racism and stereotyping. The sense of anger, hollowness and victimization this results in eludes nobody; it is an overwhelming feeling that, being so prevalent, is felt, explored and depicted by artists worldwide. Mudassar Manzoor explores similar ideas in his current solo exhibition of contemporary miniature at Koel Gallery, titled ‘I washed the dust of the eyes with blood’.

According to Manzoor, “The conflict in the name of religion has really traumatized the lives of inhabitants of this city, Lahore. All my life as a Muslim I have believed that Islam is a religion of peace, truth, love and hope… Now I see Muslims killing each other, blowing themselves up while trying to impose their ideology on others.”

An inspection of Koel Gallery reveals medium-sized works of contemporary miniature, with sober, earthy tones adorning the walls. However, there is a burst of colour here and there: bright red drips pour lavishly in certain works, while pristine gold encrusts certain surfaces. It is evident, by comparing Mansoor’s previous works to the current body that that this NCA-trained artist has had very consistent ideas and coherent imagery not only in this exhibition, but also throughout his career.

A series of works titled, The little rowing boat of life and In pursuit of white depict a delicately painted man, captured, hands bound with his head pulled back. A similar posture is seen in the artist’s other series, Precious secret of Being and The hope that comes with each morning. While all the above depict the man as a winged creature (with the meticulously-engraved wings barely visible at first), the latter two series include the emergence of man from voluptuous cloud-forms, occasionally possessing gilded wings.

In certain paintings, such as Content with the blind smoke of intoxication and The treasures of oblivion, the human figure is seen lying on the floor, as if having given up. A few of his paintings borrow imagery directly from Mughal miniature: an armed soldier pointing his spear upward, usually in the direction of the ‘hopeless’ human figure. Combined with the scarlet washes of colour, perhaps depicting passion and bloodshed, these paintings display a world where, as Manzoor states, “a small group of people…are using religion for their own benefits and when they fail to do so, they can go to any limits committing most heinous of crimes that history has witnessed”.

Interestingly, Manzoor does not limit his ideas to ‘cause and effect’ – he offers a solution. This lies in his interest in the Sufi path, as he states, “I think I am not the only one who is intrigued by Eternity, everyone in one way or the other has this urge to know about the unknown, the Infinite. Everyone is trying to do something significant, something meaningful, through which they can be remembered, and rewarded interestingly… My work revolves around the Sufi chants of love and devotion and on other hand it talks about inhumanness and false interpretation of religion.” Perhaps a way for Manzoor to deal with his surroundings is to follow the path of the Eternal, which is reflected in the creation of his images. The winged, angelic human figure in his work could depict, on one hand removal and alienation, and on the other hand, transcendence from earthly to the divine or of a man endeavouring to achieve this state.

It is not only Manzoor’s imagery, but also his work-making process that goes hand-in-hand with his Sufistic tendencies. He states, “the practice of mark making on a wasli is like a meditation. Whereas I am in a constant search of ‘eternity’ and its meaning in today’s chaotic condition. The ritual of layering the wasli’s surface with gouache is almost like adding different layers of my experiences in search of truth and mysticism.” He also feels that everyone, including the mullahs, (who have introduced a “false version of Jihaad” as the only way to obtain it), carries the aspiration to reach/achieve ‘Eternity’. As for the artists’ own desire to be eternal, Manzoor’s works will perhaps eternally remain a testament to what he stood for.

While most of Manzoor’s pieces elicit a response from the viewer in terms of impeccable skill and thought-provoking imagery, a few pieces stand out from the rest. These are the pieces where the artist has introduced a crop of green, leafy vegetation derived from traditional miniature paintings, neatly and impeccably rendered. In The seemingly endless path, a man’s flailing arms emerge from a forest-like environment that seems to engulf and trap him. However, above lies the Paradise the arms are reaching out for, glazed in gold. Precious treasures of pain displays a wounded, defeated man lying on the floor. An outcrop of the same green foliage emerges from his pained body, attempting to reach Heaven and communicate with the Divine.

One can question the lack of female presence in Mudassar Manzoor’s work, as well as the nature of the symbolic human figure: is he angelic and hopeful, or hopeless and defeated? Is he the perpetrator or the victim? Perhaps these are ambivalent questions that have no single answer. However, what is clear is that with his work, Manzoor takes his viewers on a journey that explores the relationship between man’s inadequacies and the search for what makes him whole, which is relevant and significant to today’s world situation.

Mudassar Manzoor’s ‘I washed the dust of the eyes with blood’ was on view at Koel Gallery, Karachi, from 15-26 January 2015. Images courtesy Koel Gallery.

Shanzay Subzwari is an artist and art writer based in Karachi. She tweets @shanzaysubzwari.