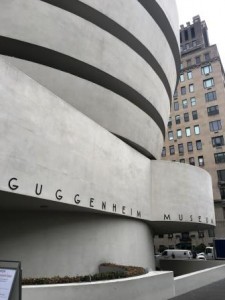 Frank Sinatra and his vagabond shoes were longing to stray, right through the very heart of it. Now I know why. Granted a four-day stint in New York is too short for comfort, but somehow it made for a great reunion. I arrived on a rainy and grey May Monday, a day before the Lahore Biennale Foundation was set to kick off their tour de US. My last trip to NYC was longer ago than I can remember, but neither time nor space, not even the weather, mattered. It felt like meeting a kindred spirit after years of being apart; I fell instantly back in love. Pop culture does not lie in its romanticism of New York.

We have so much to cover: four days, five museums, an art fair, a conversation at a museum, and not a moment to waste.

The first order of business is the Lahore Biennale Foundation’s ‘coming out’ in New York City, which definitively qualifies as a global debut. With the Foundation’s artistic director Rashid Rana in conversation with Glenn Lowry, Director of the Museum of Modern Art (MoMa), we start our NY tour with a bit of a bang. The conversation ranged from informative to enlightening with moments of excitement and agitation thrown in for good measure. Lowry and the succession of questions from the audience tried to poke and prod, to corner Rana and come at the Biennale from every direction. But Rana held forth. He had a certain je ne sais care quality that the LBF needs in my opinion. In his view, the LBF is not catering to the West’s expectations of it. On the contrary, it is filling a cultural vacuum by moulding itself into the urban environment from which it is born.

What is needed, according to the LBF, should be dictated by the city of Lahore itself. But Rana has a greedier appetite and a broader vision. He wants the local and global art community to play a prominent part in the process. Hearing him speak, it became clear that he intends to use every trick up his sleeve to challenge not only the Foundation but himself as well. That is who Rashid Rana is, constantly thinking, questioning and dreaming. He is an artist in a much broader sense of the word. Perhaps this is where the critics see a potential weakness, but it is his secret strength. Rana may be dreaming too big and expecting too much, but what was ever achieved by dreaming proportionately with reality? The truth is, without the push and pull of competing ideologies and points of view, nothing groundbreaking can happen. A breakthrough, after all, requires force.

Speaking of which, Qudsia Rahim is a force to be reckoned with. If Rashid is a dreamer, Rahim, the founder of the LBF, is a doer. She brings the realism to the table that balances the equation. I suspect a three-way tug of war between the LBF, its artistic director and its critics where everyone will come out better for ware. This is a herculean, and novel, undertaking and what makes things more challenging is that the organisers are quite literally in unchartered territory. At the very least we must tip our hats to them for their moxie! And the truth is, they will plan and prepare to a tee but in the end, and for the most part, they will have to wing it, in true Lahori fashion. Luckily, this means that the LBF is in the best hands with Rahim and Rana at its helm.

Business out of the way makes room for pleasure, which brings me to The Museum Mile. The only way I can think of to describe the experience of this stretch of wonder is to liken it to a dinner party, with every museum taking on the role of a guest. We start with The Metropolitan Museum of Art. It is an institution; attending (visiting) the metaphorical party (New York) and not meeting the Met would be a travesty. The walls resound with history. You can feel the almost century-and-a-half of it coming together, brick by brick, culminating in this ultimate splendour of a monument. Its collection of 200 million pieces of art warrants a separate essay altogether, but I will say that the haute couture exhibit Manus x Machina was quite literally breathtaking.

Next, we meet the Museum of Modern Art (MoMa), the life of the party. Well travelled, vivacious and cool, the modern art it holds is the stuff of legends, but MoMa holds it with an understated ease. Seeing Picasso’s colossal ‘Les Demoiselle d’ Avignon’ was an indescribable delight. Not to mention Van Gough’s ‘Starry Night,’ Rousseau’s ‘The Dream,’ Dali’s ‘The Persistence of Memory,’ Warhol’s ‘Campbell’s Soup Cans,’ Lichtenstein’s ‘Drowning Girl’ and the list goes on.

From one legend to the next, the Guggenheim is the quirky and eccentric character that you simply cannot get enough of. Admittedly I have a bias for the peculiar. Objectively it is odd, the spiracle architecture, the traditional terrazzo (chips) flooring and the curved concrete walls that display the art. But there is no denying that there is nothing quite like the Guggenheim.

The Frick Collection reminds us of the New York and the New Yorkers that made the city great. It is just the right dose of old world that we need in our contemporary one to keep things interesting. The collection is just as old and grand as you would expect from the nineteenth century mansion of industrialist/collector Henry Clay Frick. The three magnolia trees in the garden, and the charming courtyard inside add some of the magic.

We end the Museum Mile with Neue Galerie. A museum devoted to Austrian and German art, it represents the neue New Yorker, wordly, understated and glamorous. The gallery itself is a work of art, both in terms of the architecture and the interior. The ground floor houses the famous Café Sabarsky, which turns people away at 4pm on a Wednesday, that too with a Viennese menu! The staircase is spectacular, and together with the marble floors, the wood panelled rooms, the high ceilings, the top floor walls painted in bold cobalt blues and burnt oranges, Neue is a feast for the senses. Gustav Klimt’s ‘Portrait of Adele Bloch-Bauer,’ is its crowning glory. One floor up, Edvard Munch’s ‘The Scream’ hangs in a narrow dark room and holds unequivocal power of presence. Sadly, they do not allow pictures, which only, and predictably, adds to its mystique. Neue Galerie was the belle of the ball.

A 24-hour journey halfway across the globe is not for the fainthearted. Some believe the best cure for exhaustion and jetlag is a good old-fashioned workout.  Determined not to be defeated, with the clock ticking on a four-day Frieze New York, I decided to put the theory to the test with my version of exercise, the good old-fashioned art fair walkthrough. And Frieze at Randall’s Island Park did not disappoint, with a show-stealing tie for first place between Zahoor ul Akhlaq at Jhaveri Contemporary and Syed Haider Raza at Aicon Gallery. Akhlaq’s pieces were modern with a tilt towards the contemporary, which made for a fantastic showcase. His white canvas with casual charcoal, pastel and acrylic multi-coloured abstracts was phenomenal. The thing about masters is that they cannot disappoint, by virtue of who they are. Putting on a Raza show is like hitting the jackpot, game over.

Frieze ended with a serendipitous run-in with one of the most talented contemporary artists of our generation and a personal favourite, Salman Toor. It was bashert (New York lingo has kicked in). We set a date to meet at his studio the next day. And this is how on my last day, I encountered the New, New York. The visit to Salman Toor’s studio in Brooklyn became my personal highlight of the trip. Toor can only be described as a natural born artist. He is an artist in his heart, body and soul. He also represents the new brand of New York cool, the Brooklyn that is edgy and artsy, the new cultural hub that is reclaiming the city.

This is the harmony of the concrete jungle, the New York that is classic and the one that is contemporary, the New York of Sinatra and the Empire State of Jay Z. You have only to connect to the romanticism of it, the classicisms and the clichés, and it takes you in. The only downside of the trip came from missing the milestone that was the two-day Lahore Literary Foundation event slated to start one day after I left (major #fomo). But the optimist in me prefers to glass half full every situation. And New York in the fall remains another cliché I cannot wait to uncover.

Seher Tareen is a writer and curator who graduated with distinction with a masters degree from Central Saint Martin’s, with a thesis focusing on artists from war zones and conflict areas in Pakistan.

2 Responses to I (Heart) New York