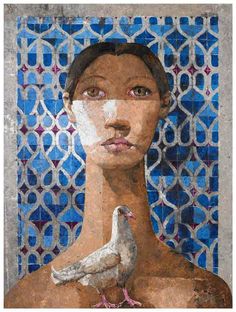 It may seem strange that so much doubt is possible about the oeuvre of so well known an artist. At least seven signed Sadequains and countless Jamil Naqshs that have traded over the past ten years at major venues, including auction houses and private hands, may be fakes. All are untitled works from the ‘60s and the ‘70s, and all have identical signatures. The trade in Sadequain forgeries is extensive, and there have been a lot of Sadequains offered by dignified dealers that are extremely questionable. When a doyenne of modern and contemporary art discovered, much to her consternation, a fake being sold at Osian’s auction held in Hong Kong, and when a fellow colleague in Lahore flaunted a fake painting she had spent a fortune on, she remarked: “To tell a person who spent $100,000 on a work that it’s worthless is pretty harsh.” Remarkably for someone of Sadequain’s stature, he has no catalogue raisonne and his foundation run by his nephew in San Diego, active as it may be, leaves the field vulnerable to disreputable dealing.

More than 1000 fake sculptures by Alberto Giacometti were seized by police over the last six years. While sellers were arrested – some already convicted, others headed for trial – it’s still unclear who made the bronzes and where. The fraudsters allegedly concocted an elaborate story to convince potential buyers that the sculptures were genuine, even writing several books to bolster their provenance.

Ever since art came into the limelight, forgery in art has been rampant. On the one hand it is an economic crime, but not necessarily an artistic or aesthetic one. A forged painting may be as pleasing as the real one, if not even better. On the other, the multiplicity of fakes in the art world goes to prove the burgeoning market demand for certain artists and/or for a certain type of art. Therefore, forgers and collectors go hand in hand. In Karachi, a gentleman well in his 70s churned out fakes that fooled the experts, and sold for millions of rupees, and eventually brought the house down. When the wife of the forged artist learnt about the clandestine activity, she conducted a police raid at the gallery. The septuagenarian not only confessed his crime but also revealed that apart from the artist in question, there were several other artists whose copies he excelled in making, and that the market was inundated with his fakes.

According to eye witnesses, the revelation was less shocking than the discovery that the reason why the wife of the artist was up in arms is not because her artist husband’s prized paintings were being forged but because the old man’s forgeries were better in quality than the ones she was getting made herself! My question is: Does an artist have the license to forge his own painting? There are painters in Pakistan who have repeated themselves ad nauseum and ad infinitum, and then there are those, young and old alike, who reproduce ditto copies of their own art to compete at the international market.

Forgers are collectors’ and art upstarts’ best friends, if not worst enemies. Our first instinct is to marvel at the forgers’ skill and lament their misdeeds. More often than not, they give us works, which the artists never made or even conceived of making. For example, Allah Bux may never have painted three women together in a row on a single canvas but a wealthy interior in Pakistan has one signed by him. Likewise, Jamil Naqsh may never have replicated himself but the twin sisters – both lying on their stomach in the nude – hang in two different cities, separated at birth. The late Swiss collector Ernst Beyeler called a fake Rothko a “sublime unknown masterwork” in 2005 and hung it in his namesake museum. He revelled in the thought that what he possessed was a one-of-its-kind Rothko that the deceased master never truly made. Is it such a bad thing if a thousand more people in Pakistan get to own a Gulgee, especially when the prices for great masterworks have soared internationally and when fewer and fewer people can afford to possess the ‘original’?

Forgers remind us that great art depends on the ideas of artists, and not necessarily on their actual hands. Many wonderful works of art by Titian, Rembrandt and Rubens were executed partly or even mostly by their studio assistants. The reason why fakes exist, succeed and survive is because the true achievement of the artists is to come up with a set of ideas and concepts and procedures for making art. The forger could be considered a faithful assistant of theirs who arrives on the scene after they’re dead. Take, once again, for instance, Sadequain’s assistant Anwar. Anwar was not only trained to paint like Sadequain by the grand old master himself, but was also encouraged to replicate, reproduce, appropriate, imitate, emulate and copy the masterpieces. On many an occasion, the grand old master would ask his assistant to sign his paintings for him by his own admission.

Forgers teach us to doubt connoisseurs. The myth that certain thoroughbred experts can smell authentic art at 100 yards (as if they were pointers) however prevails. After so many centuries of bad attributions, re-attributions and long-lived fakes, do we have any reason to believe in such fantasy experts? The truth is, the connoisseur’s eye works brilliantly in that vast majority of attributions where an artwork comes without a name attached but clearly has a single maker’s signature style and look. The same eye fails in those remaining cases where a piece quite looks like some artist’s work, but may as easily be by someone else, including a forger.

Every time an expert is fooled by a fake, the faker has once again taught us that connoisseur ship is not to be trusted. More important, we are reminded that the whole idea of a unique artistic ‘touch’ along with the ideal of ‘authenticity’ may be beside the point in our understanding of art.

In an essay by a former professor of Renaissance Art at the Institute of Fine Arts, New York, Alexander Nagel argued that forgery is a concept that barely existed in the Western world before 1500, when the art market was actually invented and a new set of players – dealers, collectors, connoisseurs, and forgers – was born. Before that a copy could stand in perfectly well for an earlier work as long as it transmitted the same essential content, and could fill the same religious or commemorative functions. To ‘forge’ meant nothing in a world where originals and copies could be interchanged without hassle. For example, when a Byzantine icon was copied, the new version was said to have the same relationship to its divine subject as the older one. Even in ancient Rome, works of ‘art’ were not considered singularities or as unrepeatable performances by an author.

Some of the twentieth century’s most notable artists set out to undermine ideas of a unique, authentic, and hand-touched works of art. When Marcel Duchamp began presenting store-bought bicycle wheels, porcelain urinals and bottle racks as ready-made sculptures, he was also inviting others to buy and show similar ‘masterworks’. Andy Warhol was famously freewheeling when it came to notions of authenticity. You could never tell and weren’t even supposed to figure out how much of a painting was done by Warhol himself and how much of it by some acolyte in his Factory. In interviews, Warhol would sometimes attribute his works to others even when he’d executed them himself. What we are left with now is opinions, because there’s no constituted entity that can write certificates for artists.