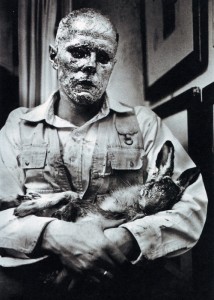 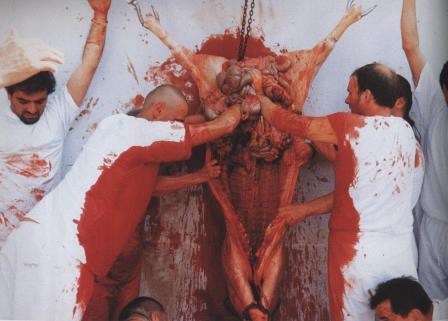 Hermann Nitsch: Sacrifice and the Crises of Performance Art

Animals have been depicted in art for some 40,000 years. Starting with Paleolithic cave paintings animals have continuously appeared in religious and cultural artifacts of almost all civilizations. In Christian art, certain animals found a special place: the lamb became a symbol of Christ; the peacock of immortality; the phoenix of resurrection and the fish (Ichthys) was a symbol of Christianity itself before the cross took over. Throughout the Medieval period and Renaissance animals appear frequently, though mostly as unimportant accessories to the human figure. Given this long history, it was only natural that animals found a special place in Modern and Postmodern art. Starting with Joseph Beuys who used a dead rabbit (How to Explain Pictures to a Dead Rabbit, 1965) and a coyote (I Like America and America Likes me, 1974) in his work, artists, such as Katharina Fritsch (Rat King, 1993) and Damien Hirst (The Impossibility of Death in the Mind of Someone Living, 1991), have frequently turned to animals as a subject matter or used their bodies as a material. In Pakistan, Basir Mehmood (Spectators, 2016) and Ehsan-ul-Haq (Rooster, 2011) have used live animals while many others have represented animals in their work.

While a comprehensive, or even a shanty, discussion of the use and appearance of animals in art remains beyond the scope of an essay, it will suffice to discuss the work of an artist whose actions (including ritualistic animal killing) have sparked controversy and have led to several court trials and three prison terms: Hermann Nitsch, born in Austria in 1938, was associated with Vienna Actionists, a group that included Günter Brus, Otto Muehl and Rudolf Schwarzkogler. This short but robust movement was part of a bigger development during the 1960s towards action art. Happenings (pioneered by Alan Kaprow) in America and the Fluxus movement (of which Joseph Beuys was an active part) in Europe had laid the foundation for performative art. In 1957, Nitsch established the Orgien Mysterien Theater (Theatre of Orgies and Mysteries), which stayed productive till 1998. The performances dealt with existential themes through ritual killing of animals against the backdrop of a crucified performer accompanied by music and dancing. His work reenacts the spirit of ancient tragedy while questioning Christian theology and seeks catharsis by embracing the tragic.

I will make connections between his work and the ancient tradition of ritual sacrifice of animals and will leave the reader with the question that if his work does for the participants what ancient mystery cults did for their adherents, has art assumed the role of religion in secular societies? To answer this we would have to figure out how ritual killing (that lies at the core of Nitsch’s practice) functions at a psychological level. We would also have to come to an understanding that by animal, we mean here a being of flesh—and flesh is always animal. Flesh is what we have in common with an animal and this commonality is what makes its sacrifice pertinent at the first place.

Nitsch has often described his work as a formidable fight between Dionysus and the crucified Christ, and as the arena for that fight his work becomes a meeting place where the Dionysian and the Christ-(ian) (which is not the same as the Christian, a distinction first made by Nietzsche in The Birth of Tragedy, 1871 and The AntiChrist, 1895) intersect. For want of space I will only focus on the Dionysian roots of his work.

Dionysius was the God of wine, ritual madness and religious ecstasy in Greek mythology who was worshipped as early as c. 1500 – 1100 BC by the Mycenaean Greeks. His origins remain obscure, though one theory which traces it back to Minoan Crete is strengthened by the popular practice of bull leaping in Minoan civilization and the similar practice of sacrificing a bull during Dionysian rituals. His mother was a mortal woman while his father was the god Zeus. As a baby Dionysus was torn apart by Titans, but Zeus resurrected him from the heart that was still left intact, thus his association with a dying-and-rising (resurrection deity) archetype of gods. The rites in his honor were also based on a seasonal death-rebirth theme.

The cult of Dionysius survived in Orphic mysteries (and later in Pythagoreanism) which were associated with the Mythical poet Orpheus who was said to have descended to the underworld and returned, a feat also accomplished by Dionysus. When the Romans took over Greece Dionysius became known as Bacchus, and his cult continued to evolve into the Bacchanalia (Roman orgiastic festivals honoring Bacchus which were more public than the initiation rites associated with the Bacchic mysteries).

The bull (from whose horn wine was drunk ) and goat (whose flesh provided wineskins) were also part of the cult, and eventually seen as manifestations of Dionysius. The bull was ritually slain and his meat (which was torn by hands to mimic the tearing apart of Dionysius by the Titans) was later enjoyed during a feast as a life affirming gesture. This use of the sacrificial animal does not fit into the theory of the origins of sacrifice as a social and communal activity as described by Robertson Smith in Lectures on the Religion of the Semites (1894) and as a gift to the gods as described by Sigmund Freud in Totem and Taboo (1913). In a Dionysius ritual the animal that is ritually killed symbolically takes on the attributes of the god and is killed as the god it symbolises while the body eaten and the blood drank is the deity reborn in the adherent. Thus the people and the deity become one in body and spirit, and can hope to share the same immortality. The sacrificial animal became the object onto which the hopes of immortality were transferred. Sacrifice thus acted as a powerful magic against the fear of death. However, turning to the reenactment of this primitive acting out by a contemporary artist, one cannot help but be overwhelmed by the sheer violence and masochism of the whole action. But does sacrifice have a deeper link to violence than what is seen at the surface? René Girard claims in Violence and the Sacred (1972) that the violent urge in man is what the idea of sacrifice is built upon. The violence once directed towards wild game in hunter gatherer communities was transferred onto fellow man in civilized societies. Narrating the Biblical story of Cain and Abel, he emphasis that Cain, who had not offered an animal sacrifice, had the violent urge that resulted in the murder of his brother, while Abel had successfully transferred his own violence towards the butchered animals. Violence, once aroused, always finds an outlet, the reason why God provided Abraham with a ram when He told him not to kill his son in God’s way. Girard writes, “The sacrifice serves to protect the entire community from its own violence; it prompts the entire community to choose victims outside itself. The elements of dissension scattered throughout the community are drawn to the person of the sacrificial victim and eliminated, at least temporarily, by its sacrifice.” [René Girard, Violence and the Sacred, trans. Patrick Gregory (London: Bloomsbury, 2013), 8] For example, in 2014, protesters belonging to Pakistan Awami Tehreek, caught a wild boar in Islamabad during a protest, tied it up, wrote Go Nawaz Go (Nawaz Sharif was the then Prime Minister of Pakistan against whose government the protest was directed) on its body and beat it to death with sticks. But, had the animal been anything other than a boar, the violence would have been met with a completely different attitude. It was the distinct place of the particular animal in religion that made such brutal violence thinkable. For religion “humanizes violence; it protects man from his own violence by taking it out of his hands, transforming it into a transcendent and ever-present danger to be kept in check by the appropriate rites appropriately observed and by a modest and prudent demeanor.” (Girard, Violence and the Sacred, 152)

Thus, the violence witnessed in Nitsch’s work is actually a harmless acting out of an emotion which is inherent in the human organism. But the problem we are faced with here is that a sacrifice can only function within a theological and social framework, which means that everything we have discussed so far about the significance of the Dionysian and the Biblical narrative falls apart once the mythological superstructure is removed. Then, in Nitsch’s case, the gestures mimicking Dionysian rage are reduced to a mockery and its redemption can come from the only structure that he operates in, that is an artistic discourse. Therefore, after having learned his source of inspiration and motivation, we would have to look at the effect that his actions has on a postmodern mind that is not interpolated by myth, at least not at a conscious level.

We would have to start by deconstructing the performances. Firstly, there is the artist himself who composes the performance and assumes a central role in it. Then come the actors who are carefully selected by the artist and given scripts to follow, however the intense nature of the performance means that the actors lose control of their emotions at certain moments during which they are not led by the script anymore. This marks a point where an actor becomes an active participant and totally gives in to the performance. In this state the actor fulfills the goal that Nitsch has set for his performance, that is to give one a strong experience of his/her own being followed by a cathartic release. But the spectator, the real viewer,  at the far end is removed from the experience and its effects on him/her would be lost. Given the intensity of the performance only two responses are possible: either one would feel betrayed and denied the experience that the actor had, or one would be nauseated and repelled by the violence and eroticism of the whole thing. This is one reason why many consider Nitsch’s work as merely transgressive relying on its shock factor, and not transformative.