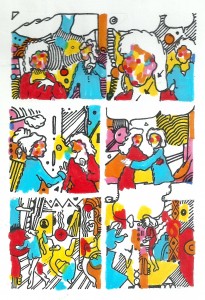 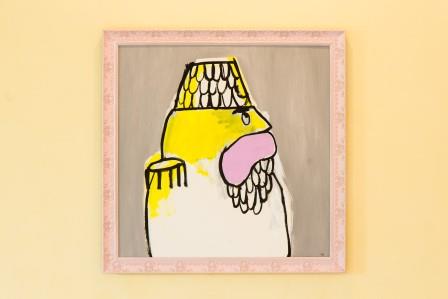 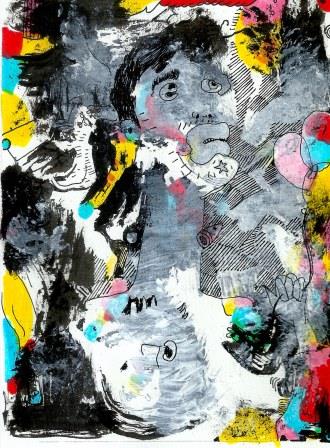 He Said. She Said.

Human beings have a natural and incessant need to respond to the environment around them, be it via thought, dialogue, debate or action. And artists, recognised as being particularly sensitive and perceptive to current scenarios, are known to imbibe their experiences and find ways to respond viscerally via the artworks they make, thus presenting society with a mirror that highlights their reality.

FOMMA Trust recently held an exhibition of two promising artists, Sophia Balagamwala and Safwan Subzwari, at their art-space (FOMMA DHA Art Centre) in Karachi. At first glance, the gallery seemed to have been converted into a fun, colourful display of light-hearted imagery, and child-like delightfulness. However, the bright frames, vivid colours and easy strokes were just an introduction for the viewer that led to the investigation of serious matters, touching upon pertinent themes and ideas that were easily relatable.

It is practically impossible, unless one lives under a rock, to ignore the incessant information we are bombarded with in today’s world. This information is ever-prevalent and ever-changing at a pace that is difficult to keep up with, and can be a source of confusion, sensory overload and, eventually, even impassiveness. In their works, Balagamwala and Subzwari create interesting responses to the multi-dimensional world they experience around them, perhaps as a form of release and catharsis.

The first thing that attracts one to Balagamwala’s pieces is the simple, cartoon-like imagery in ornate, colourful frames. I recall the child-like delight I had as I surveyed her pieces, at first at the delicious choice of colours, and then for the playful imagery. The subjects in her pieces are mustachioed men whose forms veer between human and object, portraiture and still life. The bulbous, organic strokes that constitute the human form in her works remind one of candy, play dough or fruits, which provide a cheerful quality to the serious-looking men (who remind one of Army Generals in uniform, epaulettes et al). Often, one can see a beard made of what looks like a sharifa(fruit), or a moustache that looks like a sausage.

Perhaps this abstraction between serious and playful is deliberate in the artist’s pieces, as she explains her inspiration from children’s book illustrations such as Dr. Suess that discuss some very serious issues via ‘colourful wonderful worlds’. More so, according to Balagamwala, illustration allows for exaggeration and simplification, which helps her make sense of things that seem nonsensical.

But what is the artist saying with her work? Is it a comment on gluttony and greed associated with power? Or the mere childishness of politics that is decorated with feigned purpose and fed to the public? Balagamwala believes the tradition of storytelling, when practiced by politicians on a national level, or carried out via books and the media to schoolchildren and citizens, radiates bias and invention, where a ‘mythologized version of people and events is presented’. Her work, thus, ‘explores that space where the fiction meets historical events and nonsense’, and her characters, while borrowing certain elements from known personalities in our history, do not represent a specific person, but pose questions about gender and power structures from local and global examples.

Displayed opposite Balagamwala’s space and in conversation with her pieces was the work of Safwan Subzwari, whose smaller mixed-media drawings displayed a comparatively diverse range of styles and imagery. These works, with their loose, expressive strokes and clusters of imagery, contrasted with the former artist’s pieces that were more minimalist in their execution.

Subzwari’s works range from loosely drawn black and white drawings to meticulously-rendered, colourful pieces. This interesting shift is best explained by the artist, who states that he approaches his subconscious in different ways; quicker strokes mean a spontaneous process of translating thoughts onto paper, while the detailed pieces take more time and allow him to carefully examine colour and form.

Like Balagamwala’s work, Subzwari’s pieces have an obvious illustrative feel. However, they are bolder in imagery and more slapstick in their approach. His visuals range from comic-strip-esque pieces to drawings over printed advertisements, drawings of advertisements to an assorted jumble of images. Monster-like forms and phallic symbols inundate his imagery, as does the nude form, and there is a skillful use of colour and text.

Both artists touch upon different aspects of culture. While Balagamwala’s work focuses on areas of information that are fabricated and exaggerated, Subzwari’s concerns encompass all that is not addressed enough. According to the artist, having been brought up in a conservative society, he enjoys studying the very things he was encouraged to steer away from, such as music, art and film, that boosted his imagination and allowed him to explore ideas related to sex, religion, and social culture. While the aforementioned topics can be provocative and taboo, Subzwari does not believe in self-censorship as he feels ‘artists have a responsibility to show these things unfiltered’.

Subzwari’s works overlap and distort visuals to the extent that many of them become almost abstract; leaving it to the viewer to decipher what is being said. There is also a strong element of acknowledgement and critique of popular/consumer culture. Why is this so? The artist reveals his dislike of advertisements and their manipulative qualities, as well as of the ‘layered visual pollution’ in the form of overlapping billboards or political slogans that they produce. It is this overload of imagery he experiences that is reflected in his work.

Subzwari is interested in studying and exploring societies like ours, which are ‘dealing with an identity crisis in a globalised world’. His introspection also allows him to stare ‘into a magnified mirror, noticing every detail and illustrating it as if making a self-portrait’.

Like Balagamwala’s work, Subzwari deals with paradoxes of society, where the apparent is different from reality, and where there is hypocrisy in the name of pride, nationalism and virtue. Visually, too, both artists’ works seem to reflect paradoxes via their playful way of conveying serious matters. As one perceived similarities between Balagamwala and Subzwari’s works, a back and forth exchange was created that made the show a coherent whole, and aptly reflected the artists’ voice corroborating with the show’s title, ‘He Said. She Said’.