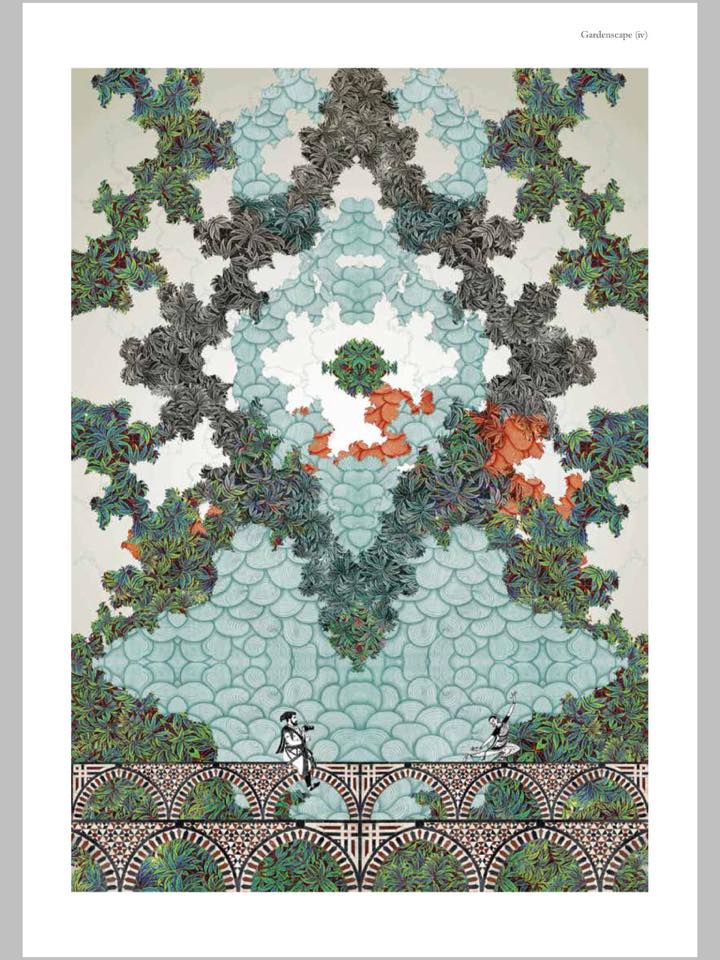 Amidst whirling clouds and jewel bright fish dotting the sky, the channels of water and drifting trees, stands a solitary figure. A Mughal prince lost

What is Art? By Leo Tolstoy
The “reluctant” Pakistanis
BACK TO THE FUTURE

Amidst whirling clouds and jewel bright fish dotting the sky, the channels of water and drifting trees, stands a solitary figure. A Mughal prince lost within his otherworldly kingdom. The 50th show to take place at Sanat Gallery, artist Muhammad Atif Khan displays an enchanting series of surreal, intricate gardenscapes.

The nature of surrealism is generally to liberate the thoughts, emotions and ideas dwelling within the subconscious. To let imagination reign freely with the belief that the artworks created will serve as clues to the secret contemplations within the mind.
From a distance, elaborate landscapes are made out, fantastical with flourishing foliage and symmetrical structures. The heart may gladden and perhaps attempt to seek a brief escapist interlude within the captivating gardens. However, at a closer glance, jarring gashes of red emerge within the images, creating a sense of underlying discord amongst the apparently peaceful visuals. Pale rust spreads like blood through the gardens, staining the lush plants. Delving deeper, other aspects seem amiss. The images contain elements of threat and danger. The prince is poised defensively, ready to shoot his arrow.

Phantomlike, rendered in black and white, he is not immediately visible. However when spotted amongst the bushes with his weapons drawn, a subtle discomfort is experienced.
Amongst a sea of gleaming fish spread like kites in the sky, the prince’s line is connected to a single garish heart, the only one in the setting of ‘Gardenscape (III)’. In ‘Gardenscape (IV)’, the prince and the heart are placed upon a scale, only to have the heart outweigh the stately sovereign. ‘Deep Dream (I)’ reveals the prince with a large staff malevolently pierced with hearts like a weapon. The garden take on a different meaning as the tumultuous relationship between the prince and the heart are considered, hinting at his emotional situation. The landscapes almost transform into obscure battlegrounds, where complex feelings and psychological dilemmas war with each other.

Khan discusses how he brings forth elements of Islamic traditions fused with tales of Persian gardens through his visuals. The Charbagh is a Persian style layout which divides the garden into four parts with channels of water or walkways, which may serve to explain the recurring symmetry present throughout the series.

Khan graduated from the National College of Arts in 1997 and is currently a faculty member there. He has had numerous national and international solo shows. Last year, the artist won the prestigious Lahore Biennale Foundation’s Open Call Competition where he created the large scale installation ‘City Within a City’.

Characteristic to surrealism, the artworks possess several strange juxtapositions. Features of traditional miniature painting are set aside elements of contemporary Pakistani culture such as truck art fish and transmission towers. In addition, the ancient Mughal prince is seen riding astride bicycles and clutching umbrellas. Different eras are merged as the lines of history are blurred, allowing the atmosphere to remain fleeting, belonging nowhere. The amalgamation of such contrasting images is made possible through the artist’s digital medium. According to Khan, the collages consist of found images which have been recycled to recreate the artist’s narratives. The carefully composed imagery gives an impression of a painted surface.

Through his bizarrely beautiful gardenscapes, Khan lets forth an imaginative space, resplendent with flora and fauna, where one can experience turbulent narratives and lose himself in a vague, ethereal world.