From the ‘Silence of Language’ to a ‘Language of Silence’

In the Republic (514a – 520a), Plato has Socrates describe, in what is known as “The Allegory of the Cave”, a group of people in the dark that have been chained all their lives with their faces turned towards the wall. Their reality is confined to shadows being cast onto the wall by people passing in front of a fire burning behind the chained prisoners. He then describes a philosopher as someone who finds a way to freedom and perceives the true form of reality, what Plato calls “Perfect Forms”, rather than the world of shadows that the other prisoners perceive. A tendency to aspire towards this perfect realm continued in Neoplatonic thought, especially in the work of Plotinus (c. 204 – 270 AD) compiled into the Enneads by his disciple Porphyry (c. 270 AD). Al-Kindī (c. 801 – 873 AD), writing in Baghdad during the Abbasid Caliphate, translated much of Platonic thought, including the Enneads which he published as the work of Aristotle thus starting a confusion which caused Neoplatonic thought to pass as Aristotelian in the Islamic world, and made it accessible and acceptable to the Muslim world. He set the goal of metaphysics as the understanding of God’s absolute oneness; any attempt at simulacra of which ends up defining what that Oneness is not. This negative theology entails the impossibility of representing God in language (visual or textual) which provides the groundwork for aniconistic discourses in Monotheistic belief systems. 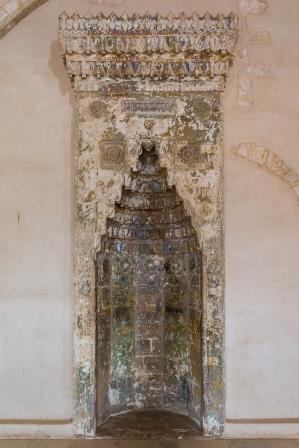 Mihrab of Sultan Ibrahim Mosque in the Fortezza of Rethymno, Crete

The earliest example of aniconism (destruction of representational items for religious motives) is from the Amarna Period in Ancient Egypt during the reign of  Akhenaten (1353 – 1336 BC) who ordered the destruction of traditional god’s temples and monuments in favor of Aten who was represented simply by the sun disk. An even stronger position against carved images is taken in Judaism: “Do not represent [such] gods by any carved statue or picture of anything in the heaven above, on the earth below, or in the water below the land.” (Exodus 20:3) The inhibition on representation in Islam, another monotheistic religion, closely follows the aniconistic tendency in Judaism. However, this negation is not negative in the sense that the void left by an absence of representation calls out the viewer’s sense (perception) to move beyond the physical threshold, in an immobile movement, and towards that Oneness which is beyond representation. For example, a mihrab (a semicircular niche in the wall of a mosque indicating the qibla) stands as a physical void welcoming sense to fill that void with desire for that which is beyond representation.

What we have discussed so far is a negative presentation, more precisely an acknowledgement of the impossibility of presenting that which is beyond presentation, or a symbolic mirroring of the infinite. This leaves the self confronted by a void where language no longer exists but is. This void is a threshold, a limit, a boundary—at this margin all language is silenced and an experience of totality is achieved. Nothing and everything is presented at this limit; here that Oneness is named for the hundredth time.

This experience of totality at the threshold is nothing other than the place where perception is led to by the sublime. As soon as we discuss liminality as a possibility of being we are in dialogue with the sublime (and the discourse established around it starting with Immanuel Kant in Western philosophy), a word which is derived from the Latin word limen (threshold) and, staying true to its name, provides a passage to the limit. It is ironic that to touch this limit, where language is silenced, remains the aim of all authentic language (especially the poetic). Here the reader may think that poetic representation is at logger heads with its one true aim, that is, to provide an experience of Totality, which may explain why Plato burned all his poetic work before entering the pupillage of Socrates, but towards the end of his life Socrates himself was led by a dream to compose poetry (Phaedo). So let us dissect this limit still further in the hope to not just reconcile the poetic with the sublime, but to make it crucial for such an experience.

Let us start with language. Earlier, we discussed the absolute silence of language at this limit. The only other duration during which a human being is beyond the reach of language is infancy when the newborn exists in a blissful state of wholeness, and before it is initiated into the symbolic, the entry into which is described by Lacan as the “mirror stage” during which the infant is forced to give up its sense of wholeness for a fragmentary existence inscripted in language. Henceforth, the human organism is trapped in language, that is, the real thing is separated from the idea of that thing, for example, the word “mother” is not the same as the mother herself. Out of a distant memory of that blissful state is born the desire for the Absolute. But being in the symbolic realm of language, the human self requires a language through which to communicate with this void where silence is the only word spoken. Here, the poetic becomes that bridge (though this is not an advocacy for a positive representation of the infinite, for to claim to comprehend or represent the infinite by finite means is to deny it its infinity. Rather, a positive representation of the infinite only presents the desire to bring to presence that which is beyond presentation, i.e. it presents the impossibility of presenting that which is beyond representation.  Its only presentation is presented as an absence). This positive presentation is only a threshold of the infinite, acting as a ladder that allows for sense to move beyond its everyday limits, towards a place which Heidegger refers to as “the open.” But this is not a physical space. It is a threshold between existence and that which is beyond existence that pulls sense towards itself, or, rather, a possibility that allows for this movement. It is displaced, or displaces itself in the sense that   sense never reaches or surpasses it, but is always almost arriving at it.

A positive presentation of the poetic (in art for example) becomes the language through which the finite communicates with the infinite, a boundary where the two realms meet. Plato calls the progression of the self towards and beyond this positive threshold the “ladder of love” and describes it in his dialogue The Symposium. In a conversation with Agathon, Socrates recounts a description of love (not to be confused with Eros) given by Diotima, a wise woman from Mantinea. Diotima proposes that man should start with the love of a person and, from there, through contemplation ascend to the love of the absolute. Lacan has described this upward movement of the self as “sublimation”, the process by which the libido is transferred from a material object (Das Ding) or body to the absolute idea of that Thing. This divine love is sometimes referred to as Platonic love and, along with other Neoplatonic ideas, was embraced by Muslim philosophers, especially by the Sufis who called it Ishq-e-Haqeeqi. Similar to the stages of divine love described by Diotima, Ishq-e-Haqeeqi (love of the Absolute) is preceded by Ishq-e-Majazi (Love, the object of desire of which is in existence, which is sometimes of the beloved or a spiritual teacher) and Ishq-e-Rasool (Love of the Prophet).

The poetic then becomes an act of remembrance—a mnemonic threshold to facilitate the contemplation of the object of love in a movement towards the Absolute. Art in the Western Christian world, though there have been intense periods of iconoclasm, shares a similar trope, in which, the figure of Christ becomes an intercedent to the Godhead. A significant example of such a contemplative project is the representation of the crucifixion of Christ. In these depictions, for example, in Matthias Grünewald’s Isenheim Altarpiece (1512 – 1516), a body is evoked in extreme ways, flayed in a condition of horror, forcing the viewer’s body into a psychological confrontation (different from a phenomenological confrontation with an object as in the work of Richard Serra for example) with the represented form. The representation becomes a site of memory where a project of mourning is acknowledged and in which the “irreducible kernel of catastrophe” (Slavoj Žižek’s term) delivers the sublime punch. Here, the tortured body becomes the threshold, an epicenter where heaven and earth, infinity and the finitude, Dionysius and Apollo, and life and death meet. It opens up like a wound/womb and makes room for the viewer’s sense to dwell in it. The traumatic body at the threshold of death pulsates like an open wound and, due to finite thought’s inability of historicize the full extent of the horror, evades time, becoming eternal. It is this recurring nature of the traumatic that makes it transcend finitude and become sublime. 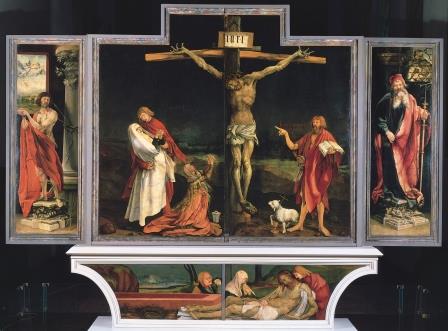 Through symptomatic acting-out of a traumatic event, for example. ritual mourning for Christ’s crucifixion by Christians, or reliving memory, for example the Shi’ite practice of self-flagellation in remembrance of the martyrs of Karbala, the body becomes a site of memory where a symbolic working-through of trauma can be attempted but never achieved, the impossibility of historicizing which makes the attempt eternal.

Aristotle, in Poetics (c. 335 BCE), while giving an account of poetry, describes tragedy as the highest form of dramatic art, which through a cathartic moment at its climax, provides an opportunity to transcend existence. Friedrich Nietzsche, in The Birth of Tragedy published in 1872, also writes that ancient Greek tragedy gave a similar response, as above, to a meaningless and tragic existence by contemplating tragedy and affirming it. Walter Benjamin, in his 1925 thesis The Origin of German Tragic Drama, establishes the ritual of contemplating another body at its extreme limit and moving above and beyond time through mourning as the unifying factor in the German trauerspiel (mourning play). While Nietzsche’s book was vehemently opposed by major scholars of his time and Benjamin’s thesis submitted to the Frankfurt University was not accepted, the post World War II world saw a resurfacing of these ideas. The horrors of Shoah and Hiroshima shattered the ideologies with which humanity had fortified itself, and amidst the trauma of mass destruction the desire for the Other was felt like a wound cut open. In poetry, literature and art, people like Paul Celan, Maurice Blanchot and Joseph Beuys, respectively, felt a desperate need to memorialize and mourn in an attempt to work through the collective trauma that the war had left behind.

Though apparently enlightened and secular, the western mind had been trained up to the task through centuries of ritual mourning for the suffering body of Christ. Thus, artists like Joseph Beuys, and later Anselm Kiefer, Eva Hesse and Doris Salcedo, were able to successfully lead the viewer through a process of mourning not just for a particular traumatic event but for the human condition in general, tragic as it is. By confronting and acknowledging the tragedy of human existence (that is an existence bound in finitude but a consciousness born with the desire for the infinite) one moves beyond it towards the place, to get to which is the true vocation of all authentic art, that is, to the threshold of existence in a solemn contemplation of the Absolute. To allow for this upward movement beyond the everyday limits of the self is the authentic project of all spirituality, of all religions, of all art, of all poetry.