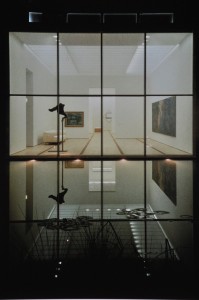 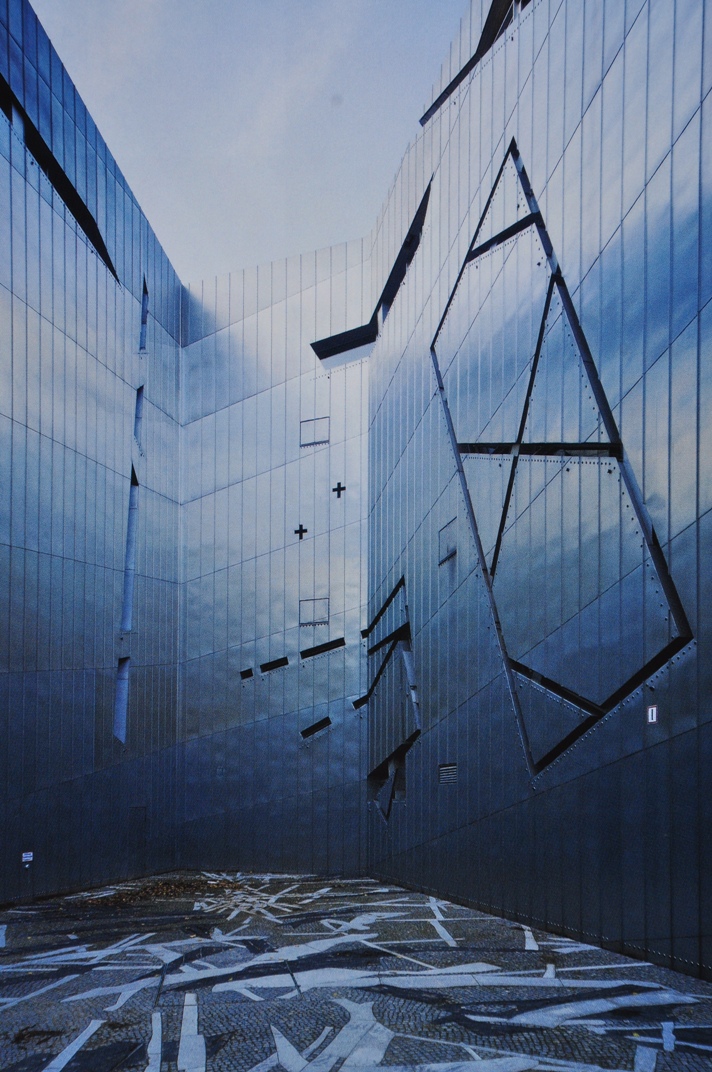 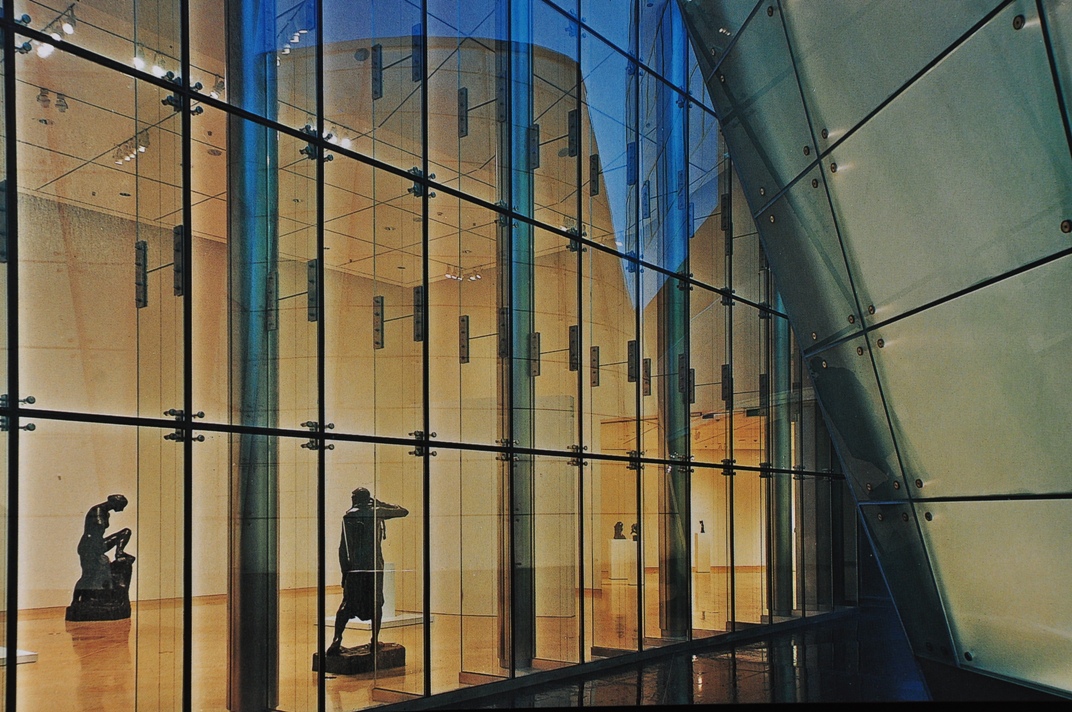 From Palazzo to Piazza

Shelter, centre of social activity, gathering place for friends, spatial adventure, and status symbol: the art space can be all these things, and more. Over the past century, progressive architects have used it as a crucible for invention, a place to test novel concepts, forms, and materials in preparation for more ambitious assignments. They use contemporary language in their response to client and site, the skillful handling of mass and volume, plan and section, and the manipulation of light. By combining all these elements in an inspired way, architects can create works of art: spaces that excite admiration and endure, sometimes achieving the iconic status of Gae Aulenti’s Musee d’Orsay, Daniel Liebeskind’s Jewish Museum, and Herzog & de Meuron’s Tate Modern.

An architect-designed art space is always an exception to the norm, and many of these examples are costly treasures, but the goal is excellence, not ostentation. Most  ‘art galleries’ are tract houses on steroids: dumb boxes with pretentious trappings that strive to impress and to be ‘contextual,’ but fail on both counts. In contrast, architect-conceived art spaces are understated or audacious, but never conventional. They achieve greatness through harmony of proportion or daring leaps into space. Embracing their surroundings, they offer sweeping views and constant surprises, soaring spaces and intimate nooks, silky wood and raw steel, separately or in juxtaposition. Some have only trees for neighbours; others are shoehorned into tight urban sites, perch on precipitous slopes, or cling like limpets to the coastline. Every art space is one-of-a-kind, the product of dialogue between demanding clients and dedicated designers. Gone are the days when art exhibitions used to be held in salons.

A good art space respects its context, built and natural, but feels no obligation to camouflage itself. The mediocrity of suburbia and the impoverished conformity of planned communities should inspire defiance, not deference. Architects have a duty to outmaneuver the censors and know-nothings – like poets in a dictatorship – confident that their opponents will later applaud what they’ve done.

The gallerist in a commercial practice must have an eye for identifying the projects no one else wants to do. In a sense, he/she is a scavenger for the marginal, the detritus that gets caught in the wide-net trawling for big, corporate fish. Rather than discarding this flotsam, he/she uses it to create an alternative space. Alternate precisely because it falls outside the definition of viable commercial architecture. Their very otherness invests these leftover buildings with the possibility of freeing themselves from the mere representation of commercial power.

But this ‘found architecture’ is itself a critical activity. Indeed, it is one of the legacies of modernism, specifically Dadaism, that the ability to read our physical environment is as much a creative act as the ability to make it. This concept carries with it the possibility that a gallery exists beyond the intentions of the architect or the prejudices of the critic. The techniques of display employed in the gallery, working through the distinct nature of each piece, play off the tensions of the gallery’s spatial choreography.

When contemporary art institutions perpetually ran the risk of inadequately performing their fundamental task of exhibiting work that artists are currently producing – and so were doomed, in a sense, to become ossified and therefore outmoded in the face of newly emerging formats and processes favoured by each new generation of artists with access to unprecedented technologies of production and installation, ‘warehouses’ came into vogue. The trend may have started from Manhattan’s Kip’s Bay and Meatpacking Districts, and spread all across to Chelsea and TriBeCa, it gained momentum in Bombay (read Mumbai) and more recently in the Middle East, where it boomed on Al Serkal Avenue of the Al Quoz industrial area of Dubai. Pakistan’s only answer to the newly spawned culture of holding art exhibitions in abandoned warehouses with naked concrete walls was Yousaf Basheer Qureshi’s ‘The Commune’ in Miskeen Gali, Keamari.

Although drawings and paintings everywhere fit into white cubes, some other art works required conditions that traditional institutions were rarely able to offer. Some exhibition spaces fostered or even brought into being such new kinds of work: One may think of the parkland in Munster, the pavilions in Venice, and the Turbine Hall at Tate Modern in London as privileged sites due to the physical, topographic or financial resources they make available to artists.

Historically, pre-modernist and modernist museums were conceived as enclosed structures – viewing machines for the exhibition of rare and ‘dead’ artistic objects. These machines positioned the work and the viewer and constructed the space surrounding the objects in regard to its shape and lighting. Starting with Centre Georges Pompidou in Beaubourg, Paris (including the Museum of Modern Art), the museum began to look outward, focusing the viewer’s attention not only on the objects of its collection, but on the city itself. From Schinkel’s Altes Museum through which the panorama of Berlin can be seen to I.M. Pei’s extension to the Louvre which articulates the either/or of the modern condition with its intended oppositions: museum/shopping, art/life, high/low, museums have consistently created a platform for viewing and experiencing the city.

The Rodin Museum in Seoul, Korea (commissioned by Samsung to house The Burghers of Calais and The Gates of Hell) proposes a building that reframes the museum as visual platform vis-à-vis the contemporary urban city by blurring the modernist oppositional paradigms previously in place. Kevin Kennon has produced a visually permeable building, where two glass walls establish boundaries and at the same time erode them with their translucency, and where multiple windows blur the oppositional relations that separate the interior and the exterior, the public and the private domains. Yet it is one place where one can sit and contemplate the masses of figures tumbling across the irregular surface under the brooding eye of The Thinker, all held within the bronze frame. Or, from where one can pray, for slowly the visitor understands that in some sense this is a chapel for modern man, one in which medieval Burghers have become companions, The Gates of Hell an altar.

The second element that makes this story unique was the 1916 decision on the part of the French government to take a splendid eighteenth-century hôtel particulier, the Hôtel Biron, and to create within it Musée Rodin in Paris. Hôtel de Salle and Hôtel de la Ville were soon to follow on their heels.

Contemporary art spaces – museums, galleries (private and public), open-air spaces, etc. – are not only one of the most important and noteworthy tasks in the public domain, they also present an extraordinarily pure materialisation of the conceptual positions that inform them. Thus art spaces become seismographs of artistic culture. At the same time, these milestones must be investigated with regard to their usability. The Solomon R. Guggenheim Museum designed by Frank Lloyd Wright for the city of New York in 1943 could not have been more different. The powerful, sculptural shape stands in deliberate contrast to the uniform grid that is Manhattan. This building likes being centre stage. Inside, visitors follow an ascending, curving ramp that dictates their route through the collection, leaving them no other option. The wall surfaces on the interior do not favour the paintings mounted there, and the large round atrium/foyer at the centre, with daylight penetrating from above through a Plexiglass cupola, is visually invasive and distracting. Here, architecture is the real attraction, the incontestable protagonist. This architecture does not serve the artworks it surrounds.

The question as to what defines or qualifies any particular space as an art ‘gallery’ is highly debatable. If a ‘gallery’ signifies a walkway or a passageway, or for that matter, a corridor, should it be called an ‘art gallery’ by virtue of the fact that art is being displayed in it? If we take into account some of the private ‘art galleries’ in Pakistan as our case study, the answer is ‘yes.’ From City Art Gallery to Louvre Art Gallery, any convertible passageway can serve the purpose. On the other hand, should bungalows, town houses, flats, basements, cellars, attics, and drawing rooms be accorded the status of ‘art galleries’ if the owners of such spaces choose to say so? Or should an art gallery stand for a site that has been designed specifically to showcase art, regardless of its scale, dimensions and genre? Conversion of a pre-existing space into a purpose-built art gallery can be an admissible idea, but to turn a drawing room into an art gallery simply by removing its furniture or crystal ware, does not quite savour the conception of a professional enterprise.

Having said that, there are two types of private galleries in Pakistan: those that are established to serve and promote art, and to offer their space as a platform to project and showcase contemporary trends in art as an essential part of their agenda. And those that are out there to ‘sell’ art like meringue pies. Their highly polished granite floors and ornately framed exhibits speak for their status as art retail outlets. And while talking about retail, one is reminded of art fairs as alternative, ephemeral art spaces where booths are erected to showcase art temporarily, and to lure collectors, buyers, art brokers, gallerists, and the general public alike. The organisers of such precious art events have been heard as whispering, “That (the art fair) keeps the money in circulation!”

Once every decade since 1977, a unique summertime convergence of large-scale European exhibitions – the Venice Biennale, Documenta, and Skulptur Projekte Munster – transforms the ecology of contemporary art into a spectacular field of display, production, and multiple curatorial conceits.

Sculpture parks, meanwhile, provide a model for the permanent display of museum-grade collections, but they restrict themselves mostly to traditional sculpture and quickly reach their spatial limits so that they become historical by default if not by intention. Any museum that wishes to take stock of the range of art being produced today needs to consider the challenge posed by the proliferation of such works: How can they be acquired, maintained, and made available.